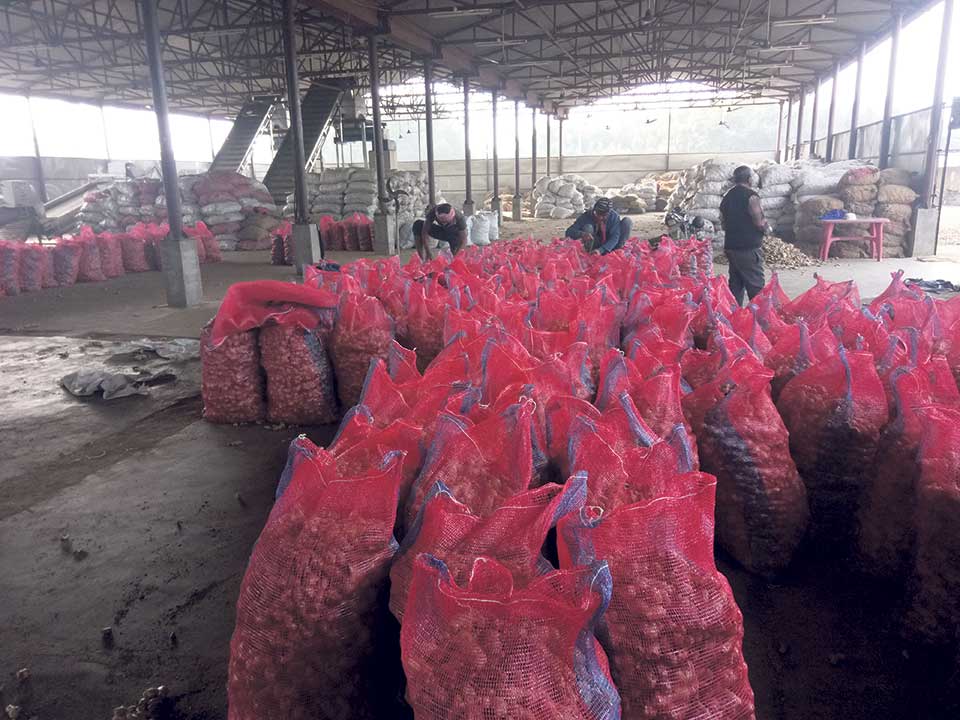 35 truckloads exported in past one and half months

Traders have exported 35 truckloads of ginger to Bangladesh over the past one and half months via Fulbari Banglabandha trade route which opened in 1997. Another 15 trucks loaded with ginger are at the parking yard of Kakarbhitta Customs Office for customs procedures.

This is the first time in over a decade that Nepal has exported ginger in this scale to a third country. Traders are getting Rs 2 per kg more in Bangladesh compared to India.

Traders say resumption of exports could be possible also due to interest showed by Bangladeshi traders.

Talking to Republica, Chief of Ilam Ginger Export Pvt Ltd, Hemanta Raj Bohora, said: “We have been exporting ginger to Bangladesh since past one and half months. We have already sent 35 trucks of ginger to the South Asian neighbor, while 15 more trucks are preparing to leave for Bangladesh,” added Bohora.

Traders vented their ire at the concerned government agencies for not taking any initiative to resume export to India which has come to a halt for nearly a week. News reports say India is planning to impose quota on Nepali ginger.

MR Traders of Bangladesh is importing ginger from Nepal. Ginger is one of Nepal's top five imports in terms of foreign currency earning.

Nepal produces about 250,000 tons of ginger annually, according to government statistics. Around 80 percent of ginger produced in the country is exported to India.

But India has been creating different obstacles in Nepal's ginger export since 2012. Realizing this, experts have long urged the government to find alternative market for Nepali ginger.

Narendra Kumar Khadka, president of Province 1 Chapter of Federation of Nepalese Chambers of Commerce and Industry (FNCCI), said that local traders have no option but to send ginger to Bangladesh. “Bangladesh can be a big export market for Nepal. It is importing ginger from different countries and traders there have said that Nepali ginger is of high quality,” added Khadka.

Bangladesh is now importing ginger from India, Myanmar, China and Sri Lanka, among others.

Traders, however, say that Nepali ginger produced without any support of the government may lose competitiveness in neighboring countries where governments provide different incentives to farmers.

Tom Rajbanshi, chairperson of Nepal Ginger Producers and Traders Association (NGPTA), however, say that Bangladesh may not purchase all the ginger produced in Nepal because of low demand. “The demand for Nepali ginger in Bangladesh may be only about 500 truckloads which is very low compared to our total production which is around 3,000 truckloads,” added Rajbanshi. “However, opening of Bangladeshi market for Nepali ginger is a milestone achievement.”

Khadka also urged the government to take diplomatic initiatives with Bangladesh for trade facilitation to increase ginger export as well as work to reduce high transportation cost which will make Nepali ginger expensive in Bangladesh.

Earlier, speaking at a talk program at Kakarbhitta, Nepali Ambassador to Bangladesh, Choplal Bhusal, said that Bangladesh can be a huge market for Nepali agro products, including ginger.

Agitating IOM students stage sixth round of protest against Dean (Photo Feature)
41 minutes ago
If you want to seek your property share, go to Baluwatar: MP Agrahari
51 minutes ago