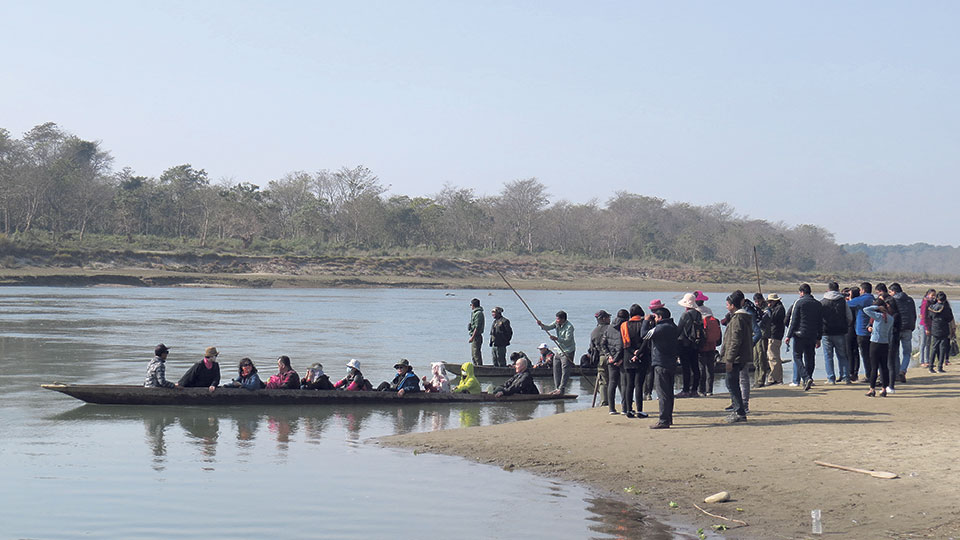 CHITWAN, Jan 30: Despite of the poor shape of Mugling-Narayanghat road, which affected movement of tourists, as well as Rapti River floods, the number of tourists visiting Chitwan National Park increased over the first half of the current fiscal year.

According to statistics of Chitwan National Park, the number of tourists visiting the protected area increased by nearly 3,000 in the first half of Fiscal Year 2017/18 compared to arrival figures of the first six months of the previous fiscal year. Altogether 67,123 tourists, including domestic tourists, visited the national park, which is also a UNESCO World Heritage site, in the first six months of FY 2017/18. Of them, 7,044 were from SAARC countries, 46,789 from other countries and 13,290 were domestic tourists.

Tourist footfall was highest in the fourth month of the fiscal year (mid-October to mid-November) when the national park welcomed 18,171 visitors. Before the earthquakes of 2015, more than 25,000 tourists used to visit the national park in the month.
Though tourist number is growing gradually, local hoteliers say the number is still below the pre-quake level.

Sauraha was inundated by monsoon floods in August. The flood slightly affected tourism industry of Sauraha which was gradually coming back on track after the 2015 earthquakes.

Tourism industry of Sauraha has been affected by one event or the other over the past three years. The earthquakes of 2015 followed by unofficial economic blockade by India severely hit the industry. The prolonged upgradation of Mugling-Narayanghat road also took toll on the tourism industry of Sauraha as visitors had to wait for hours on the road due to road widening works. The floods of August, 2017 affected tourist arrival for some weeks.

Despite all these hindrances, the tourism industry is welcoming visitors in droves, say entrepreneurs. They are hopeful of getting more tourists in the remaining months.
Before the 2015 earthquakes, Chitwan used to receive around 175,000 tourists annually. The national park received only around 87,000 visitors in 2015/16. The number grew to 139,000 tourists in FY 2016/17.

GORKHA, Nov 6: The number of visitors to the historical Gorkha Museum is on the rise. According to Suchana Bhadel, the... Read More...

DANG, July 29: Small and marginal farmers in Banke have suffered due to crop loss caused by recent floods in... Read More...