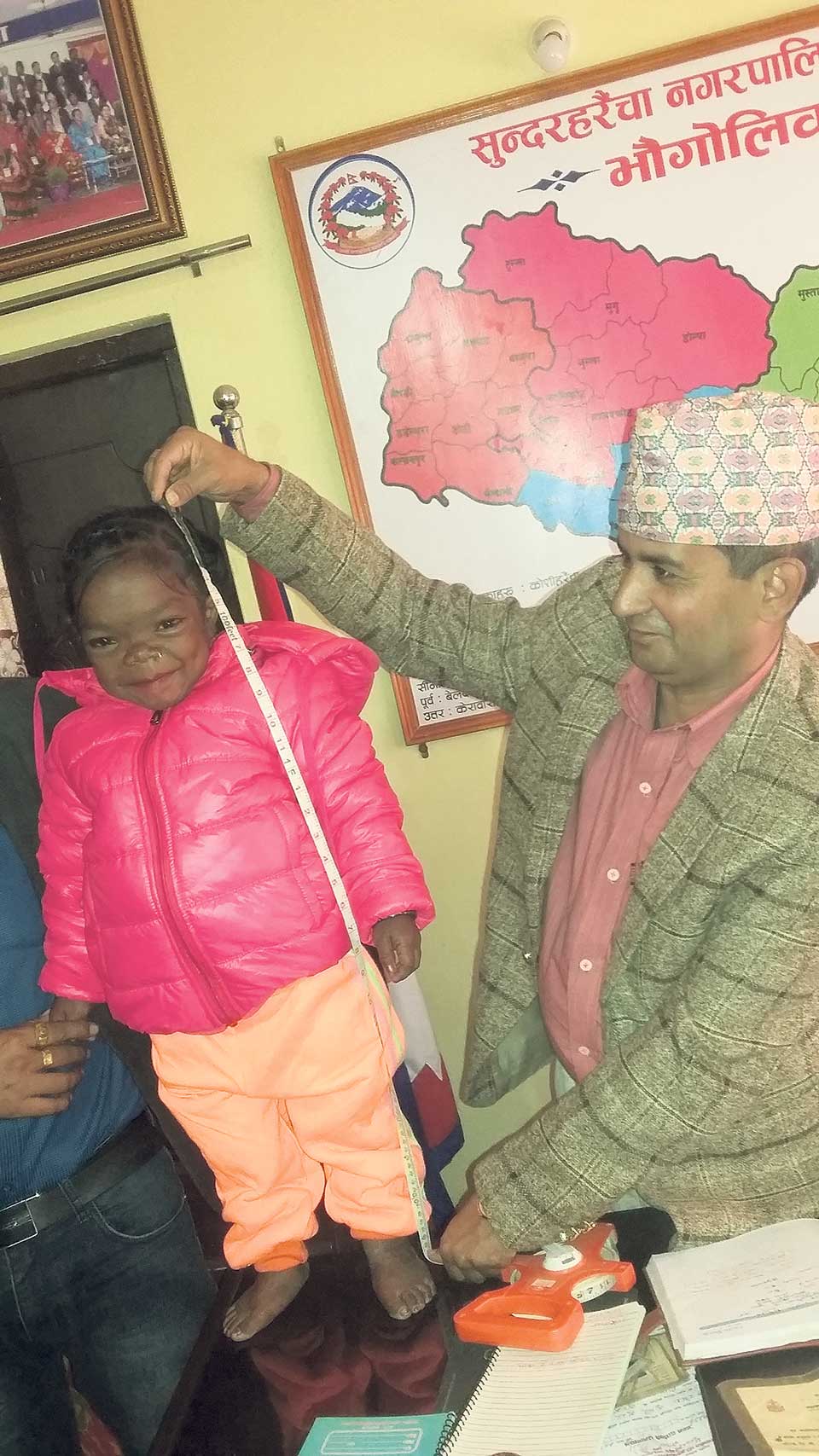 BIRATNAGAR, Jan 29: Shailendra Shrestha, the chief of ward 4 of Sundarharaicha Municipality of Morang, was surprised when he first saw Malati Rishidev in his office recently. He thought that the little girl who was carrying a recommendation for citizenship in her hands was a small child. Wearing a wry smile on his face, Shrestha asked, “Who is this recommendation for?” Malati gave no reply.

“It’s a recommendation for her own citizenship,” Mina Devi, Malati’s mother, who accompanied the little teenager, replied.

Confused and startled, ward chief Shrestha threw a glance at Malati again and asked her mother, “Is she eligible for citizenship?” Then her mother furnished Malati’s birth certificate.

Shrestha took a photo with Malati and posted it on his Facebook, giving the picture a caption - ‘With Malati, perhaps the shortest woman of Nepal’. The post was immediately shared by Shiva Prasad Dhakal, mayor of Sundarharaicha. This created quite a buzz in the village. “We are sure that Malati is the country’s shortest woman,” Mayor Dhakal said.

With this, Malati Rishidev, 19, of Sundarharaicha-4 became the ‘talk of the town’ especially on the social media. The municipality has demanded that 32-inch (81.28 cm) tall Malati be declared the country’s shortest woman. Born in a poor Musahar family, Malati is the eldest among the four siblings. Two of her younger sisters have already got married. She was born on September 3, 1999 and weighs just 14 kilos.

Malati’s family has been living in the squatter’s settlement at Biratchowk for years. Both her parents work as laborers. “Her short height used to worry us a lot but we are now glad that her height has become her identity these days,” said Ramesh, Malati’s father. As informed by her mother, Malati does not like to come out of her house and has a reserved personality. “She does not eat much and also doesn’t like to play,” said Mina Devi.

The mayor of Sundarharaicha Municipality is making every effort to urge the government to declare Malati as the shortest woman of the country. “She even could be the world’s shortest woman,” said Mayor Dhakal. The municipality has even announced to provide Malati a motivation allowance of Rs 2,000 per month, said Mayor Dhakal. He also said that the municipality will make efforts to ensure a proper shelter for her family.

Meanwhile, Nobel Medical College of Biratnagar has decided to conduct a one-year study to find out why Malati’s height did not increase.