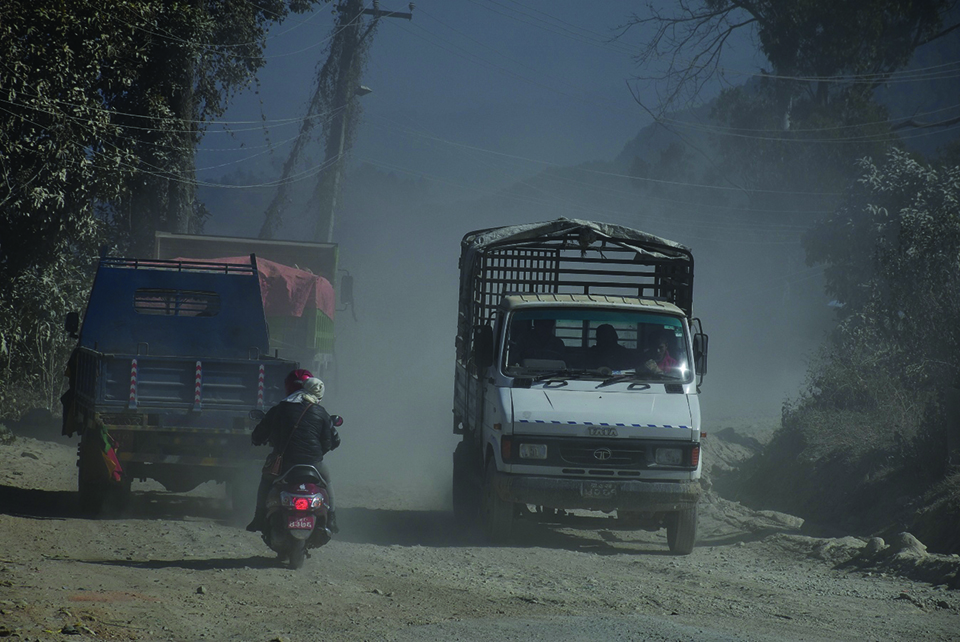 Vehicles ply on the Dhulikhel Panchkhal section of the Araniko Highway in this recent photo. Madhusudan Guragain /Republica

BANEPA, Jan 29: Thousands of people get travel along the Araniko Highway every day. For the people of Kavre, Sindhupalchowk, Ramechhap and Dolakha, it is almost a regular route. Passengers lament that they along with their motorbikes, cars, jeeps, buses and cycles plying on the road are covered in dust while traveling between Panchkhal to Dhulikhel. To make the matter worst, there are several big potholes on the highway. The bumping often hurts them and apart from taking toll on the life of the vehicles.

“The problem of dust has become so severe that it is going to kill us untimely. Children, young ones, elders all are affected alike. If this continues, we are going to see suffer from many untoward incident in the future,” noted Romi Prasad Byanju, Chairperson of Dhulikhel ward no 7. Byanju who is also the founder of Mt View English School added that children, teachers and staffs at the school have been complaining about the massive dust.

The school is located bit far from the highway. Still, the dust spreads all around. According to Byanju, the rough road has left all the locals very tense.

“Due to this road, all the Dhulikhel market remains very dusty. We cannot keep anything clean,” he said. “When we closed our school for one week, we had locked all the windows and doors after cleaning the room. But when we reopened it, there was dust all over.”

Dhulikhel is also a tourist spot. Dust has taken toll on this business as well. According to tourism entrepreneurs, few tourists love to spend time in Dhulikhel these days. There is no way to stop or lure them as the visibility around remains very poor.

Byanju believes that the poor road conditions have affected the locals' life in many ways. From their mobility to businesses have been hurt, he says.

“But still the contractors and other stakeholders simply do not care about it. If they sped up the ongoing construction work, we would be relieved,” he urged.

Locals have demanded for blacktopping the road at the earliest. Unless blacktopping is done the problem of dust cannot be addressed, they argue.

Byanju stated that the problem has gone severe in the last few months. If responsible bodies had taken care of it on time, it would not have got that worse, he said.

“When I see newly planted flowers and plants covered by the dust it feels really troublesome. On both sides of the road, we can see that the plants are covered in dust. At my own home, I am not able to give healthy environment to the plants in my garden,” he narrated. “If we talk about small children and elderly people, some of them are having problem breathing. Who is going to compensate for this?” he questioned.

Madhav Pokharel, a shopkeeper in Dhulikhel has used bundles of plastics to cover products in his agro shop to save them from dust. Yet, it has not helped much.

“It's very frustrating. I do not know how to carry on with this business in this way? It feels like a hell to work here in this condition,” he said. “It's been six months we are suffering,” he added.

Sudarshan Karki, an engineer at the Road Division Office of Bhaktapur, said that the existing blacktopping of the highway was removed to put a fresh one. But, there have been unprecedented delays in doing so. “As vehicles continued to ply on the road without the blacktopping, the road's condition worsened,” he said. He added that there have been technical issues with the construction of the work.

“Contractors say that they have not received payment. There might be such issues. But still, they cannot halt the work,” he said. “This is really a very serious matter.”

Pratigya Bhattarai, a doctor at Dhulikhel Hospital, shared that air pollution-induced health problems are getting common in all age groups of people. “People of Dhulikhel are affected by the dust. Some patients visiting the hospital have been complaining of chest ailments,” she said.

CHITWAN, August 14: Traffic has resumed along the Muglin-Narayangadh road section since this morning after clearing the debris deposited in... Read More...