Distressing condition of schools and colleges in Rolpa 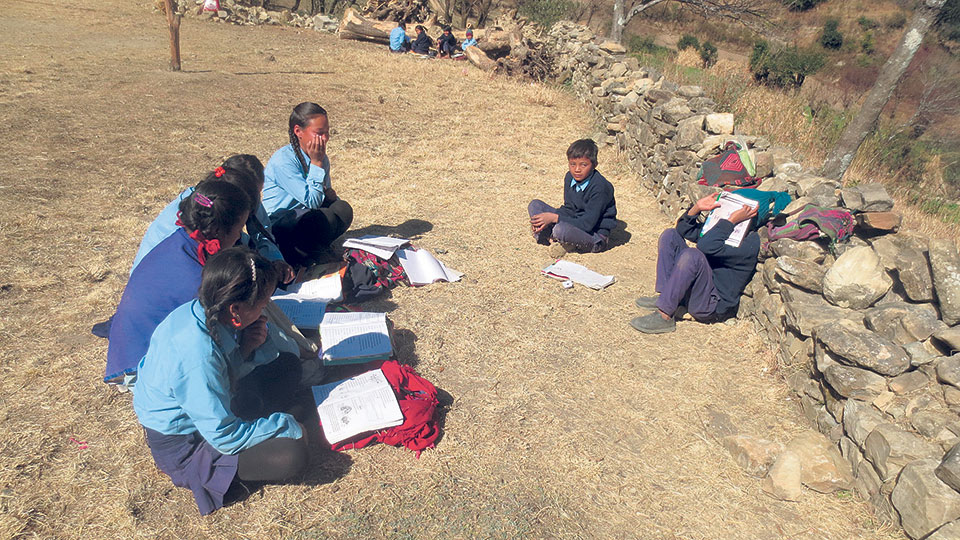 Photo: Dinesh Subedi/ Students of Kailash Primary School of Kureli Galkot spending their time in the sun basking in this recent picture.

ROLPA, Jan 28: The education system in Rolpa, one of the most underdeveloped districts in the country, is in dire need of urgent reforms. There have been cases of severe negligence in most of the education institutes of the district. However, all of the concerned stakeholders remain untouched with the alarm, some stakeholder claim.

Students in Kailash Primary School of remote village Kureli Galkot have been spending their time in the school basking in the sun. Although their final term exam is around the corner, they have not completed courses of most of the subjects, let alone revisions. The students are helpless in absence of teachers.

“We had just started our first chapter of English subject but the teacher stopped teaching shortly thereafter. Chapters in other subjects too are only just started,” said Pramila Budha, a fifth grader at the school. “To be frank, we don’t have anyone here to teach and guide us. It would have been better if we had stayed home and assisted our parents in house hold chores.”

Lal Kumari Rokka, a teacher at the school informed that the principal of the school teaches English. “The principle has been out of the school for long. Students haven’t had much chance to learn,” she said. The progress in the subject of the school principal himself shows how severe the negligence is.

Tara Subedi, the school principal, had taken leave about a month ago to celebrate Maghi Sankranti, a Hindu post-harvest festival. He has not returned yet.

The situation is no different in the fourth grade of the school. Although the final term exam is less than two months away, students have covered only one-third of their courses in Science. Likewise, they have barely covered half of the courses in Mathematics and English.

“The course progress was even worse last year during our third grade,” said Maiti Sunar, a fourth grader, who was seen in the school premises during afternoon. “Teachers come to school only once a while. Even when they come, they sometimes don’t teach us anything at all. They still have not taken our attendance today.”

Such severe negligence has jeopardized the future of students. None of the stakeholders have shown interest to intervene in the way the school operate. It is as if all of them have resigned and accepted the situation as it is.

“The principal has responsibilities towards the children and school. I really don’t know why he has not returned,” said Juddha Budha Magar, chairman of School Management Committee. “Such is the situation of education in our village.”

Grade four of the school only has four students. This shows how ineffective the education system is. The stakeholders have not been able to attract students or to persuade their parents to send them school.

The situation is no better in Janjala Multiple Campus, the only campus of the district. The campus offers master’s courses in education, humanity and management. It has just around 20 students in total and 17 teachers.

Of late, five teachers have been teaching just one student as most of the classes have one student each. Yogesh Kunwar, a third year student of Business Administration, said, “I’m alone in the classes most of the times. There used to be another student who only attended occasionally. But she to left the course to pursue computer courses nowadays.”

Although his exam is just around the corner, he said the teachers have managed to cover only half of the courses so far. “Last year, the courses didn’t even reach halfway before we had to take the final exams. Not just the teachers, we too are to be blamed as many of us are not regular.”

“Most of the good students go outside the district to study due to poor situation here. Only a handful of students enroll here. However, they too leave halfway for jobs. Each class has just about three students in maximum,” he added.

Campus chief Bishnu Acharya claimed that the administration has no role in the dwindling number of students. “Youths who are of campus-going age usually go for foreign employment. The few remaining ones too prefer doing jobs instead of attending classes. There are a very few number of students who pass grade 12, giving us hardly any students.”

The campuses’ Deputy Chief Gokarna Pun claimed that some communities in the district do not consider education a necessity. “Communities here give priority to getting a job instead of acquiring education due to poor financial background. That is why there are hardly any students in the classes here.”

However, civil society leader Khem Budha said the campus has not bothered to upgrade its standards to attract students. “I have not heard the administration holding discussions to add campus activities and solve its problems,” he said.