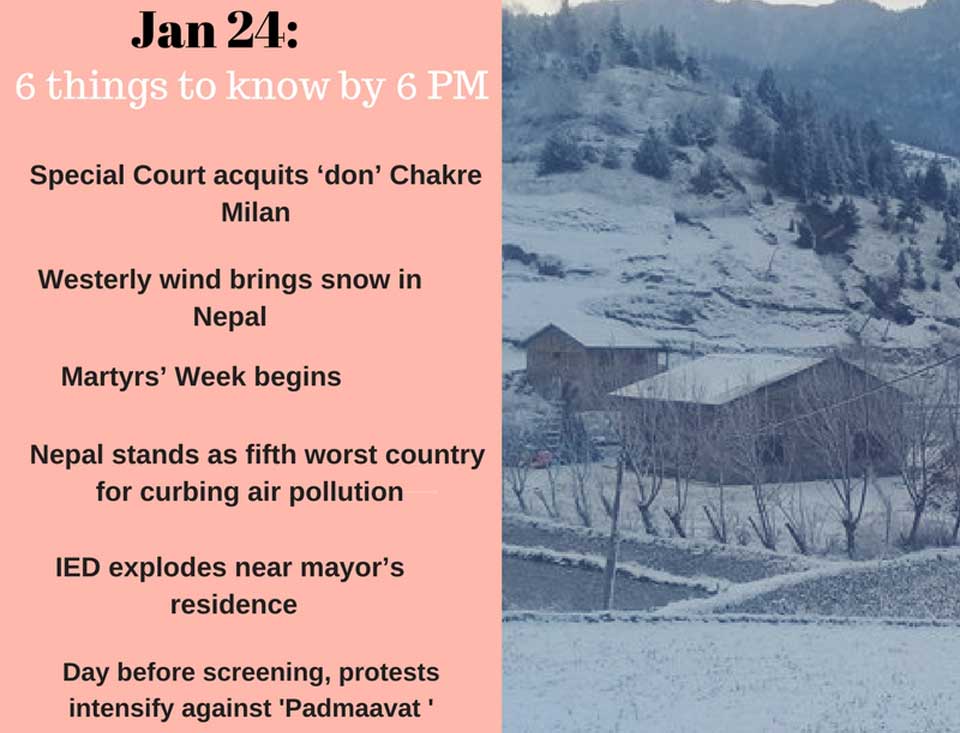 The Special Court has acquitted notorious don Milan Gurung alias Chakre Milan in the case of money laundering on Wednesday. The bench of judges Ratna Bahadur Bagchand, Chandi Raj Dhakal and Pramod Kumar Shrestha gave a clean chit to Gurung and his wife Indira Gurung citing lack of proof against the accused.

Unexpected snowfall in mountainous regions of the country is due to westerly wind that entered Nepal yesterday. Across the country, there has been snowfall in mountainous regions of Manag, Mustang, Jumla and Humla, Dolakha. Parts of the southern plains saw hailstorms after rainfall. Kathmandu valley also is experiencing rainfall since early morning.

The Martyrs’ Week, during which the nation pays rich tributes to the known and unknown martyrs who sacrificed their life for the cause of the country and the people and their freedom, has begun on Wednesday.

While the government has failed to tackle increasing air pollution, Nepal stands the fifth worst country in the world in curbing air pollution, according to Environmental Performance Index (EPI)’s latest rankings. Nepal ranked 176 out of 180 countries. The EPI rankings were published on the sidelines of the annual World Economic Forum meeting in Davos on Tuesday.

An Improvised Explosive Device (IED) exploded near the residence of Hari Singh Saud, Mayor of  Godawari Municipality on Wednesday 2:00 AM. “The IED exploded four meters away from the Mayor’s house,” Hikmat Bohora, inspector at Malakheti Area Police Post said. Police came to know about the explosion at 7:30 AM.

A day before the release of Padmaavat, a Bollywood film directed by Sanjay Leela Bhansali, protests erupted in several parts of the country. Security has been beefed up in several states, including Maharashtra, Rajasthan, Gujarat, Uttar Pradesh and Haryana. The Supreme Court Tuesday rejected petitions by the governments of Madhya Pradesh and Rajasthan, which sought to review the court’s earlier order that rejected a ban on the film.

CPN-UML chairperson KP Sharma Oli has said that the conspiracies are being planned to ruin the party unification between CPN-UML... Read More...

One arrested on charge of human trafficking
10 hours ago