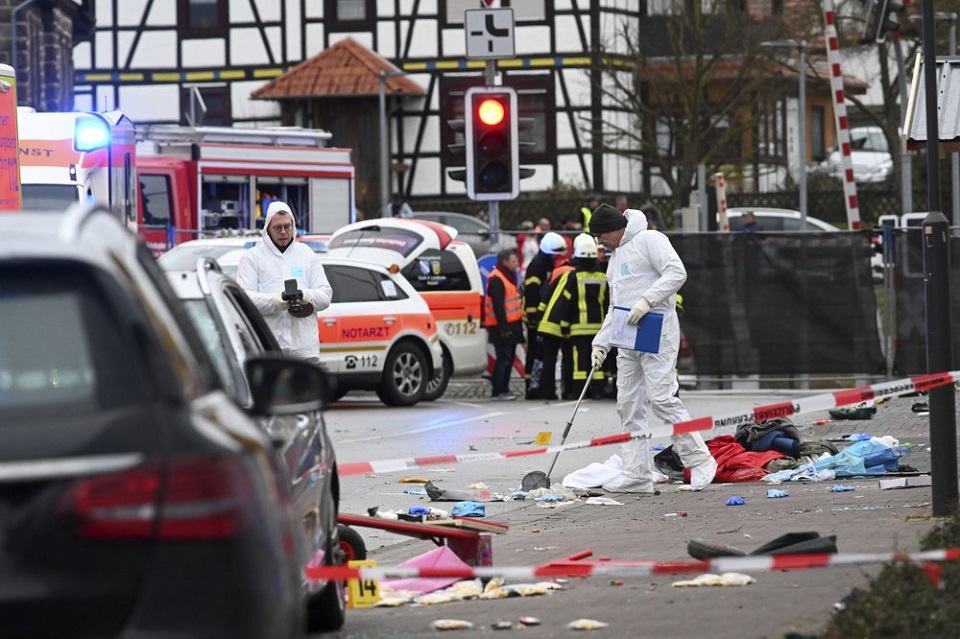 Police and rescue workers stand next to the scene of the accident with a car that is said to have crashed into a carnival parade in Volkmarsen, central Germany, Monday, Feb. 24, 2020. Several people have been injured, according to the police. The driver had been arrested by the police. (Uwe Zucchi/dpa via AP)

BERLIN, Feb 25: Thirty-five people, including 18 children, remained in the hospital Tuesday, the day after a man drove his car into a crowd celebrating Carnival in central Germany. Police continued to look for a motive for his action, which they believe was deliberate.

North Hesse state police said in addition to those people kept overnight in the hospital, a further 17 were treated and could go home after the Monday afternoon crash in the town of Volkmarsen.

The driver, a 29-year-old man from the area, was also injured in the incident and is himself hospitalized with serious head injuries, Germany’s Bild newspaper reported.

Because of his condition, he has not yet been able to be questioned, Bild reported, citing Frankfurt prosecutors.

“The motive of the perpetrator is still not clear,” North Hesse police said on Twitter. “The investigation is continuing.”

The crash in Volkmarsen, a town of about 7,000 near Kassel, about 280 kilometers (175 miles) southwest of Berlin, came at the height of Germany’s celebration of Carnival, with the biggest parades in Cologne, Duesseldorf and Mainz.

All other Carnival parades in the central state of Hesse were ended Monday as a precaution.

Coronavirus: The board game - German sisters' invention sells out for Christmas

At a loose end during Germany’s first lockdown, the four Schwaderlapp sisters decided to put their long hours indoors to... Read More...