Woes of people in northern Gorkha 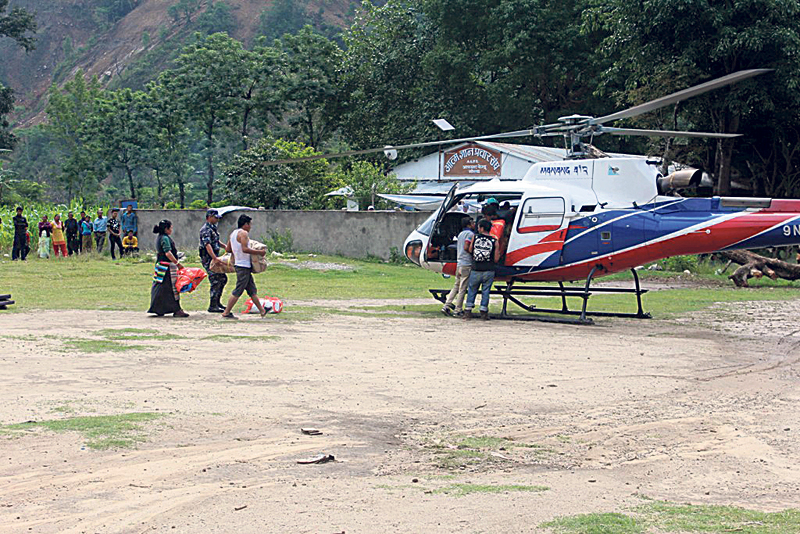 A helicopter getting ready to fly from Arughat to northern Gorkha with food.

Health workers in northern Gorkha provide only suggestions instead of treatment, say the locals

GORKHA, Aug 9: Nineteen-year-old nursing mother Preeti Gurung, who lost her life during Monday’s chopper crash in Nuwakot, was receiving treatment at Sirdibas health post in Gorkha since the last three days. She had given birth to a baby boy five days ago. She was suffering from cold, cough and fever before the delivery and her condition deteriorated due to excessive bleeding while giving birth to the child. As the bleeding did not stop, she was recommended to be taken to the capital immediately for treatment.

“We kept her there in the health post for three days. Unfortunately, her bleeding did not stop,” said Sujan Gurung, a kin of the deceased. “Preeti happens to be my daughter-in-law in relation. We are poor. Her immediate family couldn’t manage helicopter on time because of lack of money. It took us time to collect money to charter the helicopter. Maybe, she could have escaped the ill-fated chopper if we could have taken her to Kathmandu a day ago,” said Sujan.

As Rs 120,000 was needed for the chopper service, the family had to wait for one more day just to arrange the money. Preeti’s father-in-law Kitman Gurung, 65, and his wife Agyani had managed the money with great difficulty. They too had accompanied Preeti in the trip, according to Sujan. “They were trying to save the lives of their daughter-in-law and grandson but all of them died,” Sujan remarked.

The Gurung family had no other source of income except agriculture. Preeti’s husband is in Malaysia for foreign employment but he is not well paid.
“Poverty has never stopped chasing the family. If they were well off, they could have afforded treatment without any delay. Maybe all this tragedy would not have taken place,” Sujan lamented.

Nisha Tamang, a health worker had also accompanied Preeti. A local Laxmi Gurung was also in the ill-fated chopper. Both of them also perished in the crash.

The Gurung family was supposed to hand over the said amount to the chopper upon their arrival in Kathmandu. During serious illnesses or emergencies, people of rural parts of Gorkha have either to succumb to the situation or pay the demanded amount to airlines for transportation service to health facilities. The locals keep the contact number of the flight services at their fingertips. As and when they are called for help, choppers rush to the destinations to pick the patients. Fare is discussed and dealt over phone itself.

Depending on the season, choppers charge from Rs 80,000 to Rs 120,000 to the patients. Most of the poor people find it too difficult to arrange the amount. There are hundreds of people in remote Gorkha who have been living with one or the other kind of illnesses since long. They have not sought health care just because they lack money.

“We have no access to health. We get helicopter service easily when they come here to distribute food, sometimes when tourists arrive or some rich local brings helicopters here. Or else, you have to manage on your own. And doing that is next to impossible for poor people,” said a local teacher in Samagaun, Bir Bahadur Gurung. He added that the helicopters returning to Kathmandu without passengers are easy to deal with.“

Or else, we have to pay too much for the trip. But nobody cares about our hardship. Officials in our headquarters seem to be least bothered about our condition,” he added.

A number of pregnant women, nursing mothers and newborns have died prematurely in Gorkha just because of lack of delivery service. Other patients have also succumbed to their illness in lack of health care services at the local level. It takes three to seven days of walk to reach the district headquarters from seven different VCDs of northern Gorkha.

“Health service at local health posts is just an eyewash. We don’t get treatment for even minor illness, let alone serious ones. Sometimes, we don’t get medicines of fever and loose motion. The health workers provide only suggestions instead of treatment. The situation is pathetic,” said Bir Bahadur.

According to a police constable Eknarayan Bhattari in Sirdibas, health issues have killed many children and adults in Gorkha. He remarked that the health posts in the villages are not efficient.

“And there is no roadway to the center. There’s no option other than helicopters. But for poor people, getting service of helicopter is not a joke,” he said.

Army chopper with President on board makes emergency landing in Dang

KATHMANDU, Jan 27: A Nepal Army helicopter with President Bidya Devi Bhandari on board has made an emergency landing near... Read More...