Ailing and longing to return to ancestral home 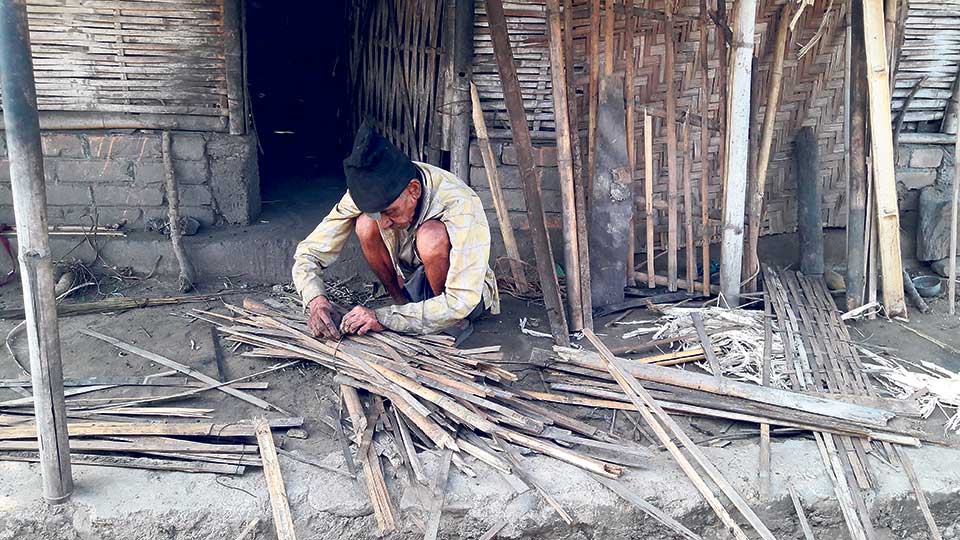 JHAPA, Jan 24: Bishnu Chhetri, 82, left Bhutan 26 years ago has been living in the refugee camp in Jhapa. Still to these days, memories of his home constantly take him back there. When he opens his eyes in the morning, he hopes he would be in Bhutan. At night when he sneaks in the bed, memories of his old home dance in his eyes. Even after so many years to these days, he feels the pangs that he felt the day he was forced to abandon his home in search of shelter and safety.

Life in the refugee camp has always remained hard to live. When the scribe reached the camp on Sunday, Chhetri was trying to arrange firewood with all his might. Fragile body and weak eyes were not able to help him carry out the task but he persisted. “What to do? Winter is here to stay. I have to collect firewood to keep myself warm,” he said.

Chhetri lives alone in his hut. His children have migrated to the USA. Though he had the option to accompany them to USA, he chose to stay back with the hope that one day, maybe, he will be allowed to repatriate to his ancestral home. He says that he would return to his home gladly, if ever provided with the opportunity.

“I am not sure how long we will be allowed to live here. Though I don’t have anyone to look after me here, next to my home in Bhutan, this is the place where I would like to spend the remainder of my days,” said the old man. His niece, who lives nearby, visits him occasionally.

In his dreams, Chhetri often finds himself back in his home in Bhutan. He shared, that he loves the dreams and cherishes them very much. However, when he wakes up and realizes that it was a dream, he feels utterly disappointed. “We all here in the refuge have been living with the hope that one day we will be able to go back home. Life of refugee is not good,” he lamented.

When he falls sick, he gets extremely frustrated. He despairs when he thinks who will take care of him if he gets critically ill. This, however, is not only his concern. Most refugees share his plight, dream and hope.

“Living alone and that too as a refugee is very hard. Life is very uncertain. If I fell ill and nobody knows about it, I will die alone while longing for my home,” he shared.

Just against his hut is the hut of Purna Bahadur Limbu, 87. Seventeen months ago, Limbu lost his younger wife to some illness. Elder wife had died while he was still in Bhutan.

“I am also quite alone just like him. At this old age, I have nobody to help me,” says Limbu adding that his close relatives, who might have taken care of him, are in Bhutan. He also does not want to go to USA either, though his relatives have been calling him. He is adamant on returning to his country.

“I believe that one day we will be allowed to get back home. All the refugees here are living with this sole wish. We want to die in Bhutan,” he said.

Finding young people in the refugee camp is almost impossible. In search of better future, many have left for third country settlement. Limbu urges the Nepal government and the international community to help them in repatriating by putting pressure on Bhutan.

“We are humans and we should be treated accordingly. Nepal gave us shelter, this place is dear to us, but our home is Bhutan and we believe that Nepal, the international community will help us to get back,” he said.

From November 15, the International Organization of Migration (IOM) has stopped all resettlement process.

However, refugees are waiting for the process to resume.  According to Tika Ram Rasaili, secretary of Beldangi Refugee Camp, the halting of the process has put refugees in great difficulty.

“We want to return to our home in Bhutan. The government here must think of our repatriation and our human rights,” he said. “We want to be settled the right way.”

UNHCR data says that around 110,000 Bhutanese Refugees have been resettled and around 10,000 are still in the refugee camps.

Yuvaraj Sangpang, a refugee at the camp complained that human rights of the refugees have not been addressed. “We want permanent solution of this problem. Our future is in dilemma,” he said adding that they are desperate to return to their home Bhutan.

RASUWA, March 9: After living a displaced life for more than 33 months, a large number of quake victims have headed... Read More...