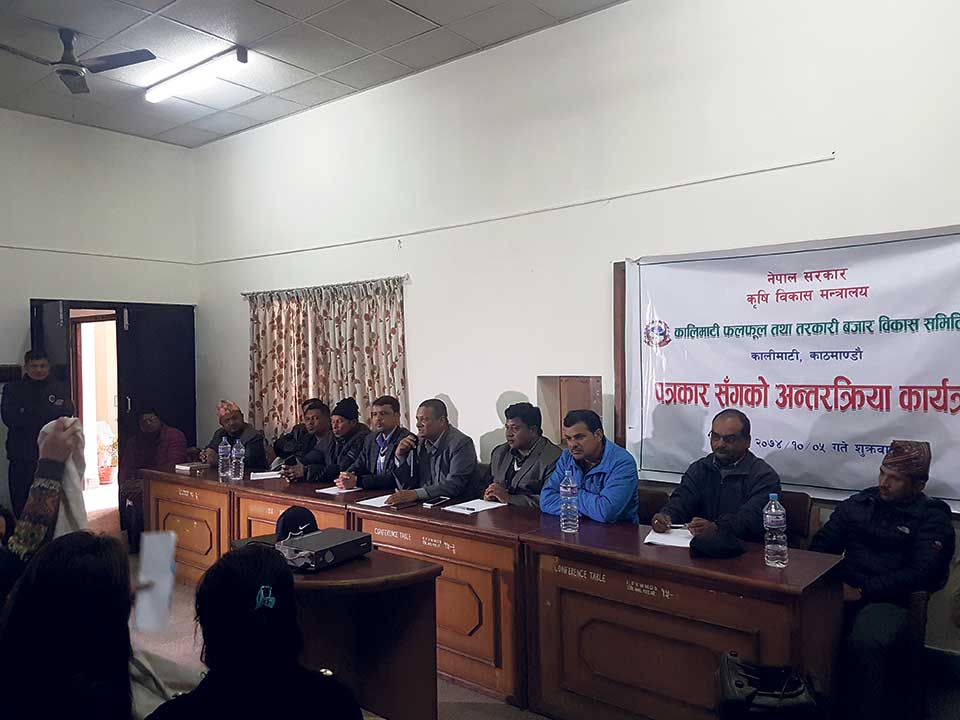 At a press conference organized by Kalimati Fruits and Vegetables Market Development Board (KFVMDB), deputy director of the market Binaya Shrestha said that there has always been a big difference in price of agricultural products from when it leaves the farms and to when it reaches the retail market. The reason behind such a price difference is mainly the transportation procedure, according to Shrestha.

“The Nepali fruit and vegetable market has an abundance of products produced within and outside Nepal. The step by step transportation of these edibles contributes to the extravagant price in the market,” said Shrestha.

Shrestha added: “Farmers sell their products to the traders at a collection center within a district, the transportation of these products is based on their production site. Before hitting the market, different levels of handlers each take a certain amount of profit, inflating the price gradually,” who further explained.

“With each level of handlers making money by inflating the price to a certain extent, these charges make up a lion’s share of the market price which has been causing financial strains among consumers.”

Due to lack of proper infrastructure in the country, the transportation process is very costly, according to a report published by KFVMDB.

Speaking at the event, Shrestha explained: “Due to lack of proper road networks in certain parts of the country, the transportation of fruits and vegetables are made in smaller vehicles which tends to be more costly than larger vehicles that transport edibles in greater quantities.”

Due to the lengthy transportation time without proper preservation (refrigeration) mechanism, the vegetables at times start rotting before hitting the market. The costs of rotten vegetables that are wasted are recovered by inflating the price of fruits and vegetables, which shoots up the price even more.

Speaking with Republica, Kashiraj Dahal, joint secretary of Ministry of Agricultural Development (MoAD) explained: “Kathmandu at times receives more fruits and vegetables than required. As these excess items decay, traders lose a chunk of their expected sales which they cover by inflating the price of the products.”

“If there were to be more marketplaces, the produced goods would be scattered across many districts minimizing waste and loss,” added Dahal.

Despite professionalization of agriculture in the country, the agricultural yield produced by individual farmers is far less than that in other nations.

Nepal's politics is in a serious and sensitive situation: NCP General Secy Chand
19 minutes ago