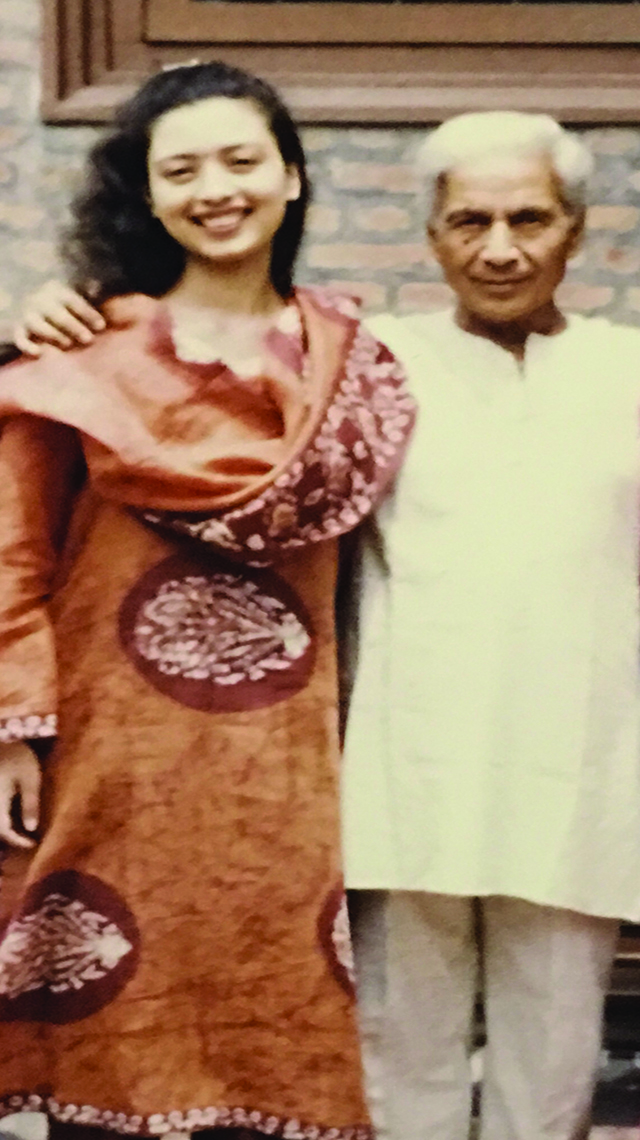 It was late summer of 1995. I was home from college in India. My grandfather, Dor Bahadur Bista, by then was Nepal’s pioneering anthropologist. A visit to his house would mean always coming across a stream of visitors, both foreigners and Nepalis. He was enigmatic, charming and loving to his grandkids. He had an eye for details and disliked my habit of chewing gum, which I left soon after his repeat comments about the kind of sound I made. My grandfather was short, chubby while we were growing up but lean and thin in the early 90s. He always made fun of my laughter which was funny in itself.

He would type in his famous typewriter and the sound of his typewriter was musical. When I was little, I would sit next to him, and he would give me lined paper and would ask me to write stories. I remember writing about Krishna and a little girl. He was surprised that I believed in myth and asked me about it. That was the only story that came to my head at that time but what was special was that he was not dismissive of my imagination. He was always patient and explained to me about creativity, inquisitive minds and would encourage me to write. My handwriting was a horror and he was a beauty!

Later, I even looked for a used Italian Olivetti typewriter in the market. Because I loved his typewriter and he had typed his books and numerous articles on it. I also wanted to type my first book on one. This is the beautiful memory I grew up with. By the time he wrote Fatalism and Development, he used a computer but he never owned one. Typewriter and notebooks were his styles, coupled with Gheorghe Zamfir playing the beautiful pan flute in the background.

He is not a fatalistic person and I still prefer using present tense to write about him even after 22 years of his disappearance.  But that I remember every detail of that particular day after all these years like it was yesterday still baffles me with pain. Though he was never inquisitive about personal lives, he would want to know details that others would be dismissive of. He would inquire my life in women’s college, post-college plans and my perception of Indian society vis-à-vis Nepali and American society. He was there in every step of the way when I came out of my comfort zone to explore the world, and perhaps that trust and faith from him was the unspoken check and balance of my life.

I recall discussing openly about his books and articles and he was eager to know of my interpretation. He would not say I am right or wrong but appreciated questions. I particularly remember questioning him after he wrote that ancestors of the Shah Kings are Magars. This created a huge controversy. I had one of best conversations with him on the topic. He was trying to construe if I was uncomfortable with the fact that he started a controversy or that I was genuinely interested to know more about the history and our social construction. He also warned me to step aside from momentary, populist pathway.
And it was this fleeting moment on that particular day in 1995 that I remember the most about my grandfather. We called him Afu lovingly. That fine morning, he was being interviewed by some PhD student or a journalist from Australia or Germany. Had I known it was going to be my last meeting with Afu, I would have probably paid more attention. It was meant to be a casual goodbye to my grandparents before heading back to college.
I still remember the conversation on that day very well and I have always wondered why. Perhaps I have played that scene over and over on my head.

I bade goodbye to muwa, my grandmother, and told her that I wouldn’t want to disturb Afu but she was persistent. “You better say goodbye else I will have to hear him complain and he will keep on asking about you,” muwa told me. I was pleasantly amused by this coming from muwa since he was not emotional about goodbyes and grandfatherly hugs. I peeked inside his simple yet artistic living room and gestured that I was leaving. I expected him to just wave, but he said, “Wait for a while.” I walk out and start chit-chatting with muwa.

Muwa and I talk about the college food. I told her how I miss tama, aloo and gundruk. Being a strict vegetarian back then, all I could talk about was how much I missed Nepali food in the United States and also in India. Muwa and I ate dhindo with lapsi achar while I waited for Afu to finish his interview.

Afu then comes out and starts asking me about college. We talk about courses I am taking. He was far more interested in knowing my perception of the society and how I feel about being a “girl” in Nepali context, traveling alone whenever and wherever. He keeps on telling me to never regret but to question and keep on exploring till I get my answers. I didn’t think much about the conversation at the time because these were the conversations I had with him ever since school and when I was alone abroad. I always had a mind of my own and he knew that, but he challenged me from the very beginning, which scared me but helped me to follow my instinct even if it meant going against the tide.

All this while, muwa was watching us and said, “Okay, now don’t complain that she did not say goodbye.” I laughed the silly granddaughter laugh. And as I was about to leave, Afu HUGS me! A huge deal for this man who rarely displayed such emotion. A tight hug from Afu, a quick kiss to my muwa and I begin to walk towards the gate. I then realize that I am crying and had this sudden feeling that perhaps I saw tears in his eyes too. A shock to me for it was just a college I was going to and would be back soon. I wipe my tears, open the gate but close it with a heavy heart.

I have played this scene a hundred times since the time I learned of his disappearance in the summer of 1996 when I was home from college.

I never shared this story with anyone for he would have never liked such a personal story to come out. I tried writing this down but always ended up feeling sad. Did he know that day that he was leaving for good? He did say he was going to Jumla but again, that was a regular trip. But when I recall this incident, there was something unusual about that morning. While I was weaving a dream of travelling to Jumla together with him one day, had he made up his mind about the one-way journey? Afu always gave “different, strange and meaningful” gifts. Was that hugging a farewell, a message? Did I actually see tears or did my own tears create that haze?

Stories have been said and written about his disappearance and perhaps it will be a myth one day. I have my own questions, disappointments and doubts. Perhaps I will never be able to give the closure he always wished for. He will be 90 today and I refuse to use past tense. After 22 years of his disappearance, I want him to know that wherever he is, he gave me the greatest hug ever that day. That was the last time I saw him. These tears and that hug so fresh will remain in my memory forever. Thank you and I love you. Happy Birthday Afu!

Still don’t have a gift for your cherished one? Instead of just reaching into your wallet to buy a hurried... Read More...