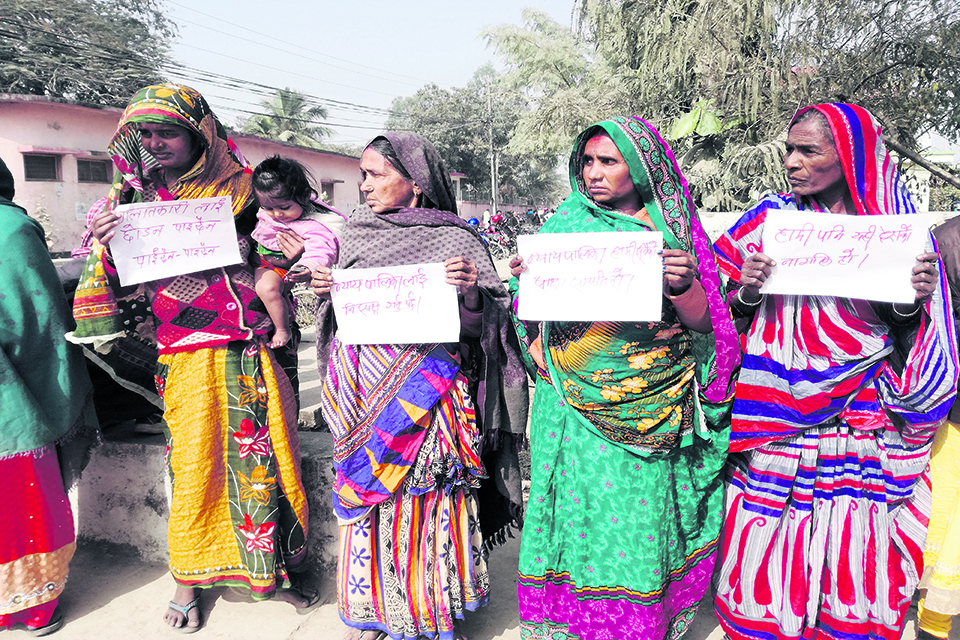 Women activists demonstrate in front of the District Court Dhanusha in this recent photo. Suresh Yadav/Republica

JANAKPUR, Jan 17: Very few cases of rape and sexual abuses reach to the court in Madhes. Most vulnerable to such abuses are victims from the poor financial background. Due to the poor economic background, the victim's family settles the case outside of the court, women activists claim. They lament that the influence of the upper-class people, who often treat poor girls as their easy prey, in negotiating with the victim's family prevents the victim from getting justice.

Besides the shortage of finance to take the culprit to the court, the major factor because of which the victim's family settles the case out of the court, is the fear of social stigma that the victim and their family may be subject to after disclosing the issue in the court, women activists claim.

“Violence against women is very common in Madhes. Women have to tolerate a lot at home and most of the times; girls and women from poor background are even victimized by outsiders. And most often these victimizers are from an influential family having political connections and all,” said an advocate requesting anonymity. “Such cases rarely come to court. They are settled outside of the court between the victim and culprit's family. And even it comes to the court; the powerful ones generally have a high hand,” he added.

On Tuesday, women activists demonstrated at the Dhanusha District Court premises demanding justice for a rape case that is presently under review at the court. The protestors warned the judge against 'his intention to free the culprit on bail'. A week back, a similar protest was held at the court's premises, urging the court to announce its verdict in favor the victim.

A month back, kin of Ranjana Sharma, who was found murdered, had demonstrated in the court's premise demanding justice. The deceased's family had organized that protests doubting that the court will let off Sharma's in-laws in the case, whom they accuse of murdering her. Subsequently, the court ordered to take Sharma's father in law into custody and investigate the case further.

Even after showing their presence in the court and urging for justice, there is little hope as 'the court cases are easily influenced by money and power', they lamented. “We staged sit in right in front of the court. We chanted slogans throughout the day. Our hope is just that the court delivers justice. They must take the case seriously and give due punishment to the murderers,” said the kin of the deceased.

However, the sit-ins are not always entertained by the court. Two months ago, four protestors were held for staging sit-in front of the court. The protest was organized by a widow against the court for freeing the accused on bail in the murder of her husband. She was held with other three.

It does not end at that. The court has been facing criticism for some time now. It has been publicly condemned for freeing many accused on bail. The case of a murder of journalist Uma Singh had become controversial. Similarly, there was another case of Rupa Karna. Karna was murdered 'for not bringing enough dowries.'  In all these cases, the public remained unsatisfied with the court's decision, activists claim.

An advocate with the court admitted that the court is indeed losing its credibility. When one after other verdicts becomes unpopular among the public, it naturally questions the credibility the court and the judiciary as a whole, he said, requesting anonymity.

“When an individual's all personal effort to get justice fails, the case reaches the court. And if the court also disappoints where would the individual go?” he remarked.

Another advocate at the court, however, refuted this charge. He stated that those who were staging a sit-in at the court or demonstrating are not doing so with clean intention. “The protestors are influenced by others. One does not just comes over and stages a sit-in at court. The self-claimed victims are doing so because they are influenced by others, and it has become a kind of trend,” he said. He also wished to be not quoted fearing that it could 'put him in danger'.  He further added that “just demonstrating does not prove them right and the court wrong.”

Chief Justice at the district court Radha Krishna Upreti meanwhile expressed dissatisfaction over the 'negative news' about the court. “Such news has become widespread and this has given out the wrong message,” he said.

Upreti urged people not to be so much suspicious about judges and the functioning of the court. “We are committed to justice. I want people to have faith in the institution,” he said.

DAMAK, Jan 21: The number of people donating their body after death for research and academic purpose is increasing of... Read More...

TAMGHAS, Dec 10: A mass demonstration was held here today as part of the 11th day of the indefinite district-wide... Read More...

Canadian citizen busted on the charge of pedophilia
8 hours ago