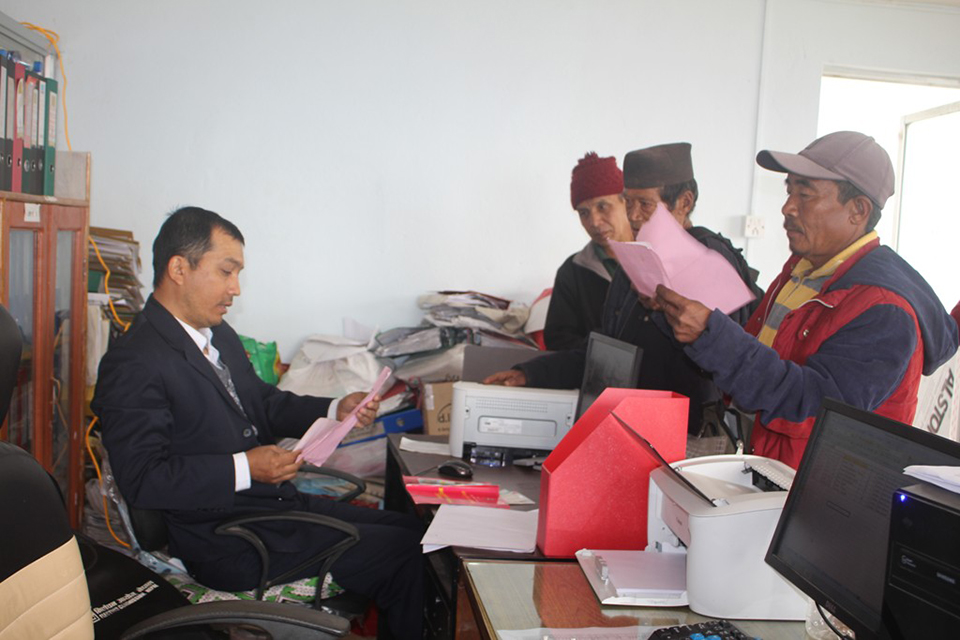 Narhari Sapkota/Republica Earthquake victims stand in queue at the District Coordination Committee for inquiring about the status of their state housing grant in Gorkha on Sunday.

GORKHA, Jan 16: Mangal Bahadur Gurung of Siranchowk Rural Municipality-6 has been waiting for second installment of the housing grant since several months. Every time he visits the office of District Coordination Committee (DCC) for it, he is told to wait a bit longer. “I am tired of this now,” Gurung laments. “They always say I still need to wait.”

Gurung lost his house to the devastating earthquake of April 2015. Though in the immediate aftermath, the government announced relief packages, it took a very long time for victims like Gurung to get any of the relief. “I got the first installment of housing grant over a year ago. That too after going through many hassles,” he reported.

While receiving the grant, he was directed by the officials to follow the standards set by the government for building his house. But, in lack sufficient numbers of technicians and engineers in village, Gurung had to toil a hard to even start the construction of the house.
“I was able to complete all the required documentation for starting the construction of my house only a few months back. But, even after that I have been able to continue the construction. One or the other problems keep popping up,” said Gurung.

Lack of construction materials and human resource has been a common problem the quake victims faced in building their houses. In case of few, they had to rebuild their house as the authorities concerned were not satisfied with their designs or pointed out the construction was not done in compliance with the government-mandated standard. Gurung, fortunately, did not have to go through the hassle. His house design and the initial construction was approved.

“But then, since they are taking lot of time to provide second installment, I am in dilemma. If I proceed with the construction without taking the grant now, I might be in trouble later. I do not know what to do, it’s a serious problem,” he complained.

He shared that depending on the government has in fact given endless hassles to the people like him. Along with that, he noted that given all the troubles the grant provided by the state is not sufficient for building a house.

“We have lost all our belongings to the earthquake. Even our farms were rende4red useless by the quake and landslides. Despite that, we would have made ends meet and do something to get our family into a new home. But the hope of getting a grant from the government has simply made us wait,” he said.

He says that the prolonged delay in receiving the housing grant is costing them as prices of construction materials and labor costs have been rising constantly over the years.
Purna Bahadur Shrestha of Shahid Lakhan Rural Municipality-5 was arguing with the DCC officials on Sunday. He was upset for not receiving the second installment of housing grant.

He said that lack of information forces the people like him to keep visiting the office. And these visits, he argued, wastes a lot their time, effort, and money.

“Sometimes they are not satisfied with our signatures, some other time, they get confused with our name and identity. Every time I visit the office, they always line up some hurdle and lengthen the process,” he fumed right in front of the DCC officials.
Local Development Officer Narayan Acharya stated that the administration does not give hassles to the beneficiaries intentionally and argued that some victims face hassles, as they don’t stick to the official procedures.

“It is not that we do not want to cooperate, however, we also have to follow the process outlined,” he said. “And yes, some procedures are lethargic but still rules have to be followed.” He shared that most of the delays occur on the technical side of the procedures and added that they have been trying to smoothen the process.

Even though the victims have been queuing up for second and third installments, not even two third of the total number of the estimated house are under construction, National Reconstruction Authority states.

The authority has called on the victims to claim their first installment amount by January 14. “The rush is due to the time factor. But still, there are many people who are yet to get the amount, including myself,” Gurung lamented.