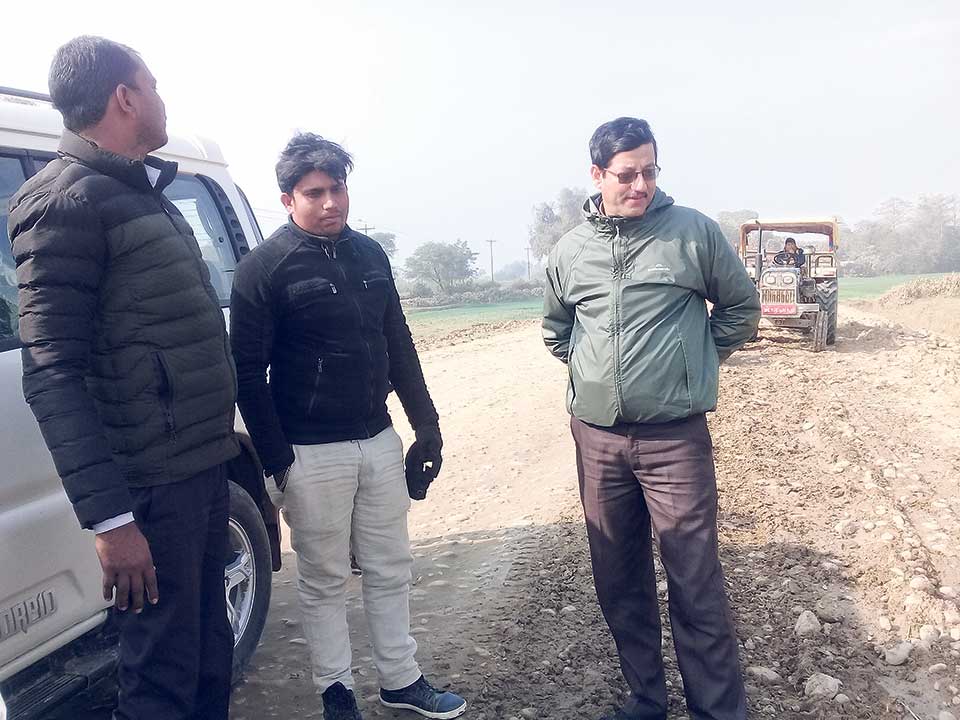 BARDIYA, Jan 14: Irregularities have been found, including use of low-standard material, in the construction of the 18-kilometer section of Hulak Rajmarg, connecting Madhuvan Municipality Ward 8 of Bardiya to Murtiha along Nepal-India border.

It has been found that rocks as big as 5 and 20 kilograms big were used during the construction of the road although the size of rocks was not supposed to exceed 70 millimeters. Similarly, 50 percent soil was being used instead of the ideal 15 to 20 percent soil as per government standards, according to municipality technician Ramesh Gautam.

Although the locals were hopeful of timely completion of the road when erstwhile Minister for Physical Infrastructure and Transport Ramesh Lekhak inaugurated the construction a year ago in all the three sections of the road, they have been disappointed by the way the progress is being made.

The Government of India had shown interest towards the project by initiating surveys back in 2004. But later Government of Nepal had issued a tender for the postal road project.

While the locals are unhappy with the government’s dependence on foreign aid for construction of the road, which is causing delay in the project, the contractors have also been unable to make any progress even after 30 months of getting the contract. The road shall act as a bridge between districts of the hilly and tarai regions, directly benefiting the locals in the long run.

Locals anticipate robust growth of trade and economy with the completion of the postal road.

The construction officials say that the irregular proportion of stone and soil is due to the machine separating soil and stone and the proportion is being regulated as per government regulations.

Demands to not compromise on quality
The locals of Gulariya and Madhuban municipalities have cautioned the authorities against compromising the quality of the road, insisting that the construction work as of now is below standards.
Local bodies, people’s representatives, police and other stakeholders have raised concern over the quality of construction material of the road.
Mayor Yadav pointed out the mistakes during the construction process and asked concerned authorities to look into the matter to maintain standards.

BARDIYA, July 7: Krishna Sigdel of Madhuwan Municipality was going back home from the district headquarters, Gulariya, on Wednesday evening. His... Read More...