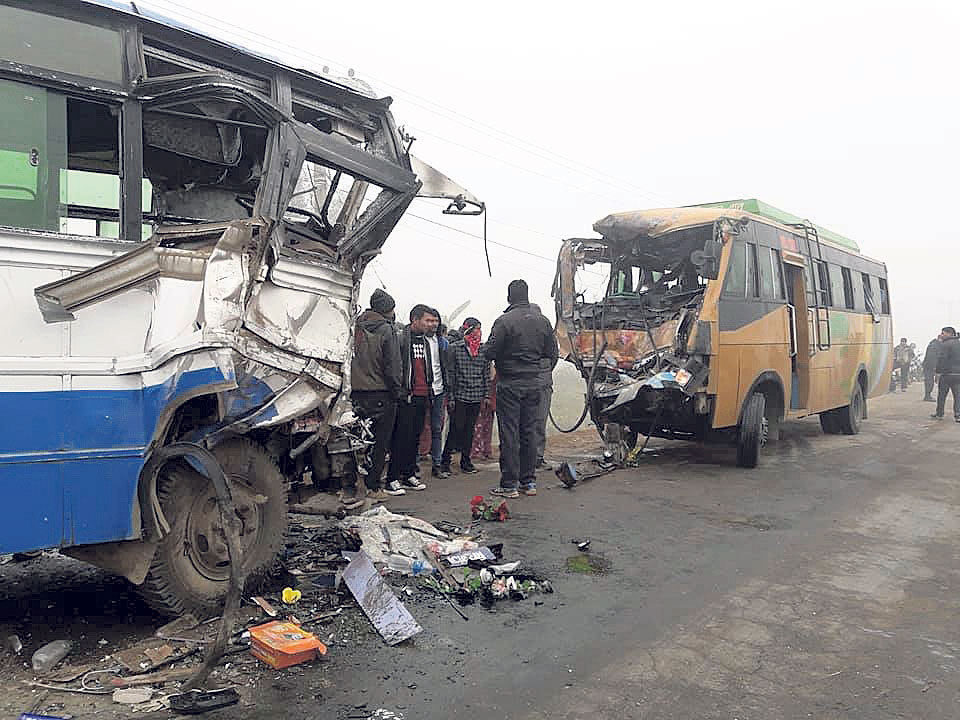 An accident site where two buses collided with each other on the Lamki road section of the East-West Highway in Kailali district due to poor visibility on Saturday.

TIKAPUR, Jan 14: Foggy weather conditions created by prolonged cold in Kailali district has led to an increase in road accidents of late.

On Saturday morning, two buses collided with each other on the Lamki road section of the East-West Highway due to poor visibility. One of the buses (Na 7 Kha 226) was en route to Attariya from Narayanghat when it collided with the other one (Na 4 Kha 5132) en route to Dhangadhi from Tikapur.

Poor visibility due to intense fogs is the main reason behind the accident, according to Police Inspector Suraj Bahadur Khadka of Area Police Office, Lamki.

“Thick fogs have posed a dangerous risk to vehicular movement. This accident also happened due to the same reason,” he said.

As many as 19 people sustained injuries in the accident. The Lamki-based Lal Ratna Hospital has referred ten injured to Nepalgunj Medical College, Kohalpur, for further treatment.

Just last Monday, a woman lost her life after a bus (Na 5 Kha 7692) en route to Dhangadhi hit her. She was identified as Dhaula Devi Khanal, 25, of Bhuruwa, Lamkichuha Municipality-1.

Last Sunday too, Mansara Neupane, 45, of the same place, also died after being hit by a bus (Na 6 Kha 1084) en route to Kathmandu from Dhangadhi.

According to police, both the women were hit by buses in the morning. Low visibility due to foggy weather condition was the main reason in both the cases, police said.

Our political leaders are unjustly chastised for selling the false dream of turning Nepal into another ‘Singapore’ or ‘Switzerland’. What... Read More...

Flights disrupted due to dense fog

KOHALPUR  (Banke), Dec 28: All flights to and from the Nepalgunj airport were disrupted this morning due to the dense fog. Read More...