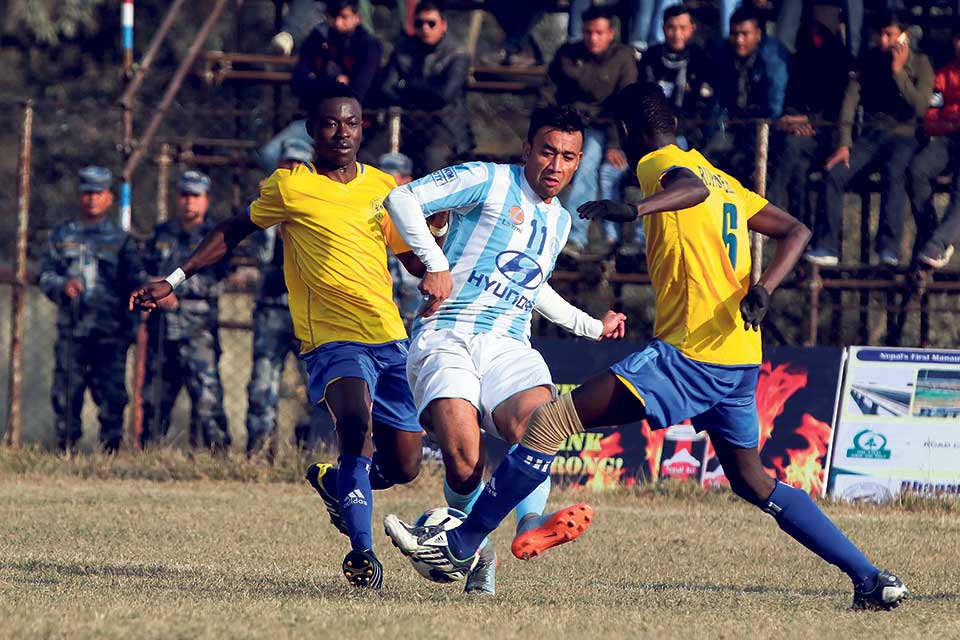 Sujal Shrestha of Manang Marshyangdi Club (center) in action against Rupandehi XI during a quarterfinal match of the Far-western Khaptad Gold Cup football tournament at the Dhangadhi Stadium in Dhangadhi on Friday. Photo: Republica

Regular defender Kamal Shrestha got injured when he collided with MMC’s goalkeeper Dinesh Thapa Magar. He suffered the injury on his face in the 33rd minute and was taken immediately to the hospital.

The defending champion MMC had taken the lead in the 20th minute with African player Victor Emobi scoring the first goal before Shrestha getting injured. Emobi, who played from I-League club Minerva Punjab Football Club, utilized the pass from retired national football team skipper Anil Gurung to help MMC put the lead. Emobi got the man-of-the-match award with a prize of Rs 10,000.

MMC doubled the lead with Rupandehi’s own goal. Rupandehi’s Chhiring Gurung put the ball into his own net as he tried to clear Sujal Shrestha’s shot in the 55th minute. MMC, then, scored two goals in the last 10 minutes of the match to make the scoreline look 4-0. Bishal Rai scored MMC’s third goal in the 82nd minute, and Bimal Rana completed the rout immediately after Rai scored the third.

Canadian citizen busted on the charge of pedophilia
14 hours ago

Agreement between Nepal Tourism Board and India's TAAI
15 hours ago

MCC will be endorsed only after consensus among major political parties: FM Dr Khadka
10 hours ago