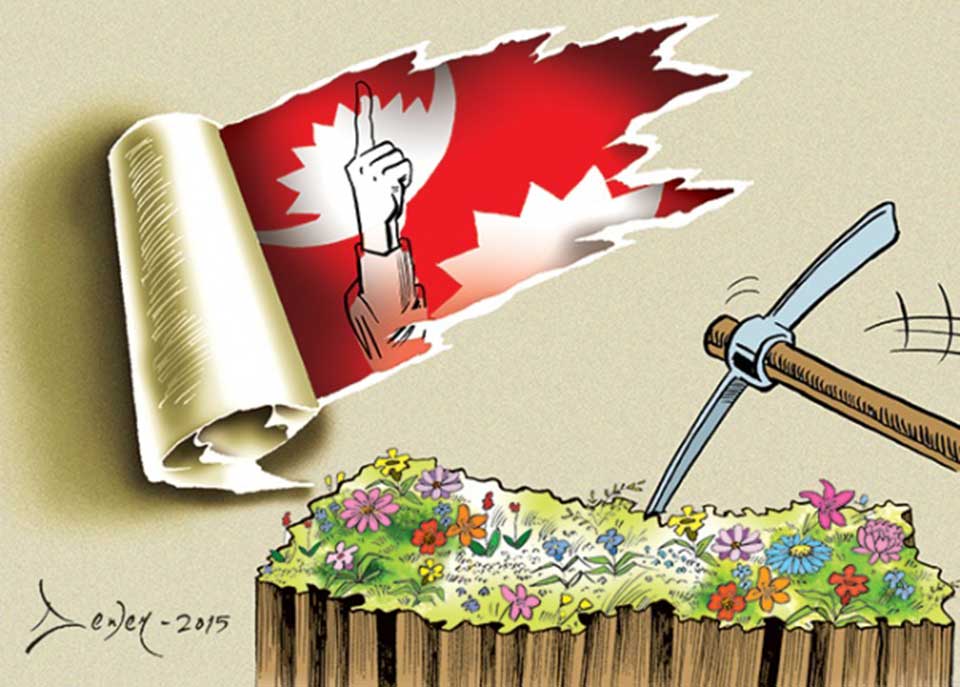 Nepal is now a democratic country, but not the enlightened one envisioned by Buddha and Prithivi Narayan Shah

A philosopher by the name of Frederick Nietzsche once said “sometimes people don’t want to hear the truth because they don’t want their illusion destroyed.” We all have our illusions.

There is one name that resides in hearts of many Nepalis mainly because he sacrificed the comfort and luxury of the palace to dedicate all his life in difficult conditions of the battlefield to unify tiny principalities of the region with a vision to design a prosperous and powerful country. But we do not know much about him, do we?

For the past few decades, some have portrayed him to be a great warrior king who brought glory to Hindu religion. Others have portrayed him as a brutal human being who united smaller states to promote ‘Khas’ and Hindu hegemony. Both sides to this debate are wrong and have twisted the facts to their benefits. In reality, he was a philosopher King. Yes, the kind Plato talked about in his seminal work The Republic. He was a philosopher king who had a vision and determination to establish ideal-polis in the region.

In The Republic Plato describes ideal polis as an enlightened county based on justice and human virtue. Such a country will have a form of socio-political organisation that allows citizens to maximize their potential as well as live in accordance with universal laws and truths. A nation could only reach such ideals if and when rulers committed to these truths would go about protecting and preserving ideals for the sake of common good. Plato believed this type of utopian dream could only be achieved if philosopher kings (or heads of states of our times) ruled nation-states. The King has the power to create a true “Kallipolis” (ideal state) where political rule depends not on power, but on knowledge.

Simply put, Plato is implying that a true democracy can only exist if and when a country is ruled by a philosopher king (or a head of state).

If we view Nepali democracy from Plato’s eyes, it is a big farce, for people actually do not have any say in running the affairs of the state. Yes they get to vote once in four or five years after which elected officials rule as they please exploiting the state resources for their personal benefits.

A democracy that we have now in Nepal is the idea of majority rule where protection of minorities is not guaranteed. In a sense, our democracy is ‘the rule by demos’ where demos can be understood as the mob. According to Plato, the mob is unfit to rule because political decisions require judgment and skill. What we need in Nepal is a participatory democracy enabled by the Internet. Philosophers, according to Plato, have the capacity to grasp the eternal and immutable to establish ‘Kallipolis’ that it is supposed to be best for everyone, not just a few.

In Kallipolis, there are still classes (or caste in Hindu context), but class/caste conflict is minimal because exploitation and class and caste domination are discouraged.
Nepal originally started with a vision of “Kallipolis.”

Drabya Shah who was a Prince of the Kingdom of Lamjung saw decadence. He believed a country could be governed better and founded Gorkha.   The new order, however, did not get a solid philosophical foundation until Ram Shah took the kingship. Ram Shah advanced the idea of “Kallipolis” by governing the new found state based on justice, freedom, and equality.

After several generations, Prithivi Narayan Shah with the wisdom, courage, and determination decided to spread the idea of “Kallipolis” outside the border of Gorkha using the military superiority that the tiny young nation had achieved in a very short period of time after it came into existence.

His success is due to fact that common people welcomed the values brought by Gorkhalis because caste-based discrimination was rampant everywhere. So when the Gorkhalis came about spreading their ideology grounded in justice, equality, and freedom, people welcomed them as liberators.

Therefore, the success of the Gorkha came about not only because of their military superiority but because they went about with the conquest not to create a hegemony but to spread the very idea of “Kallipolis.”

The people of Gorkha felt it was necessary to change things because caste-based hierarchy and discrimination had become the norm in the region. Dalits were not allowed to drink from the same water source, attend temples, and wear shoes in the presence of an upper caste. On top of that, many had to live in constant fear of being publicly humiliated and sometimes beaten with impunity by upper-caste seeking to keep them in their place.

For Gorkhalis this type of discrimination was not acceptable even though they were strict followers of basic Hinduism. Furthermore, they also believed caste-based discrimination stifled nation-states from becoming a military and economic super power.
This type of thinking is prescribed by many political and religious doctrines not only in the region but across the world.

According to renowned Nepali scholar Dor Bahadur Bista, Prithvi Narayan Shah’s phenomenal success came about as he continued the tradition started by his ancestor Ram Shah. In most cases, he treated everyone equally largely ignoring hierarchic caste prescriptions for the regulation of social behavior, specially in the military to start with. He considered all groups as equals.

His campaign for unification was successful in part because he had been able to recognize ethnic and regional pride and self-esteem among his followers. Bista writes, “rather than supporting orthodox caste practices, he encouraged everyone to be soldiers.” People from any caste fit to join military were provided with an opportunity to do so.  This came about as Ram Shah was totally against caste-based fatalism and stratified hierarchy.

Ram Shah’s code of justice for all appealed everyone who responded to its innate egalitarianism. As a result, people flocked to Gorkha to receive proper justice and also better economic opportunities just like people flock to the United States these days.
So the adage “for knowledge go to Banaras” and “for justice go to Gorkha” became widespread in the region. What appealed to progressives in the region was the tiny nation’s native egalitarianism.

The hierarchical social order of the caste system of the Hindu religion was minimal if not totally absent. As a result, radical thinkers, writers, poets, artists, engineers, farmers, philosophers, entrepreneurs who were wrongly punished for holding scientific, religious, and political views that did not align with the status-quo happily headed to Gorkha.
Many settled there permanently. In modern-day speak, Gorkha gave political asylum to many radical thinkers of that time.

As a result, the court was well versed with modern ideological, scientific, religious, and philosophical thoughts from different parts of the world including China, India, the Middle East and Europe. However, the main reason that contributed to establishing Gorkha as the super power of the region in such a short period of time is due to the fact that corruption was not tolerated.  Both bribe takers and givers are the worst enemies of the nation, warned King Prithvi.

Unfortunately, few decades after the demise of Prithivi Narayan Shah, corruption and caste-based hierarchies started to creep in slowly.  After the Kot massacre, things took a 180-degree turn. Favouritism became rife in the court, beureacracy and the military creating dissatisfaction among people across the nation.

After more than two centuries of Prithivi Narayan Shah’s rule, Maoist movement promised a Kallipolis of some sort. However, the dream of Kallipolis is yet to be realized. Unfortunately corruption has become the norm and hundreds of youth leave the country every day.

Democracy is the best political system  in the world, but it is not going to deliver any prosperity to this impoverished nation of ours unless we  have zero tolerance for corruption.

The greatest of the philosopher king is Buddha. Had he not taken the path of sage hood and sacrificed the Kinghood, he probably would have been a great leader like the Alexander the Great or Genghis Khan. Nepal is now a democratic country, but not the enlightened one envisioned by Plato, Buddha, and Prithivi Narayan Shah.

The blue print of Nepal is to be a ‘Kallipolis’ and that is the direction the country as a whole should move towards. This is only possible if the leadership is determined to put corruption at bay. Can the new leadership work towards a dream of making Nepal a Kallipolis?

My wishes are buried beneath the crust I’m knocked down in the age long rush ... Read More...