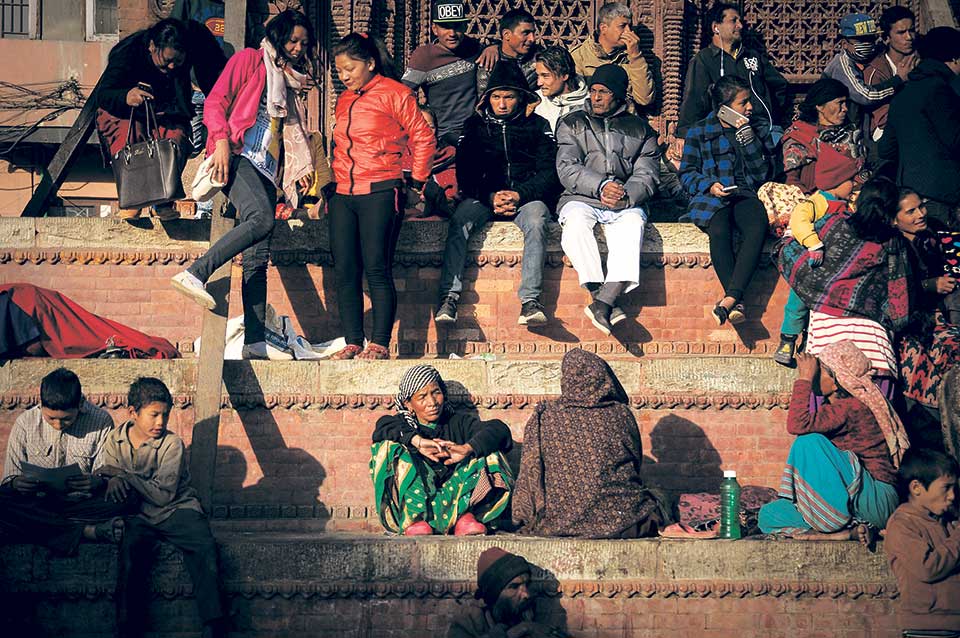 People are seen savoring the winter sun on the steps of the Shiva-Parvati Temple at Kathmandu Durbar Square in Kathmandu on Sunday morning. The temple was built by Bahadur Shah, a regent and son of Prithvi Narayan Shah, in the 18th century. Photo: Pratik Rayamajhi

With the winter reaching its peak, the weather has been consistently frigid since past week, shows the data maintained by the Meteorological Forecasting Division (MFD). The division has predicted that the minimum temperature this week would remain in the range of zero degree Celsius to two degrees Celsius.

To combat the harsh cold, valley denizens could be seen huddled up together around fires lit on the streets during mornings and evenings. Usually shopkeepers and street vendors of various inner streets of the valley light fire in a safe corner. The pedestrians too, despite looking to be in a rush, join them for a quick warmth.

The situation is more difficult for people outside the valley. Jumla district had the coldest day on Sunday, with its mercury dipping to -8.7 degrees Celsius. Likewise, much of the tarai belt of the country still remains blanketed with heavy fog during mornings and evenings. Forecasters have urged the residents to brace for colder days ahead as they warn of the possibility of a further dip in mercury.

According to the MFD, tarai districts have not yet experienced cold waves although they remain blanketed under thick fogs during dusks and dawns. “We have certain criteria for dense fogs to be considered as cold waves. The situation is not in that phase yet in tarai districts,” said meteorologist Rimal.

The harsh winter is already affecting normalcy in tarai districts. Many community schools are closed while very little movement of people is seen on the roads. Elderly citizens and children are especially vulnerable to cold and the diseases related with it.

More than a dozen people have already perished this winter due to cold. Homeless people, flood and earthquake victims residing in temporary tents as well as poverty-stricken households dependent on daily-wage labors are badly suffering due to the lack of warm clothes and proper shelter.