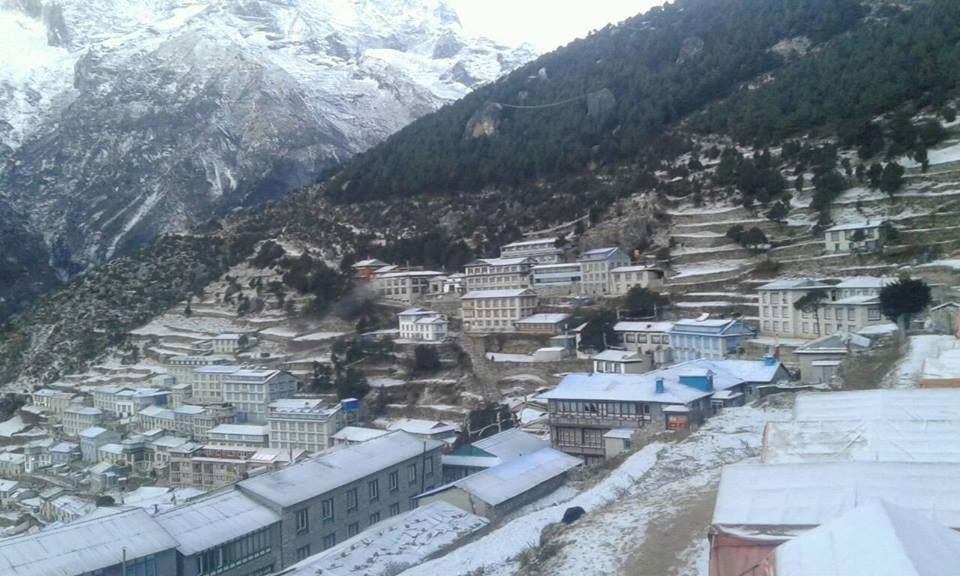 Namche Bazaar, the gateway to Mt. Everest, in Khumbu region, wears a deserted look as the locals leave for low-lying regions with the tourist season ending. (Radha Dhungana/Republica)

SOLUKHUMBU, Jan 5: With the mercury dipping, locals from northern part of Solukhumbu district have left for low-lying areas including the capital city Kathmandu to escape biting cold.

Solukhumbu airport, hotels, campsite, trails, bridges and viewpoints which used to be flooded with tourists during the tourist season, now are wearing a deserted look.

“The tourist season is over. No tourists come to visit Solukhumbu these days. The entrepreneurs have also left for warmer areas to escape bitter cold," said Toya Shrestha, a local.

Locals of Khumbu region including Goraksep, Lubuche, Gokyo, Chhukung, Jongla, Thangnak and Thame have already left for Kathmandu with the mercury plummeting. The northern area of Khumbu region will receive heavy snowfall during the winter and it will continue until March.

Influenced by foreign cultures, traditions and lifestyle, the denizens of Thame do also go abroad during this season to escape cold.

Locals of Namche, which is also known as the gateway to Mt. Everest, Gokyo, Chola Pas, Kalapatthar, Everest Base Camp have already deserted their villages.

Except few number of people including watchmen, almost all the Khumbu denizens have left for warmer areas to avoid biting cold.

RASUWA, March 5: After living a displaced life for more than 33 months, a large number of quake victims have headed... Read More...