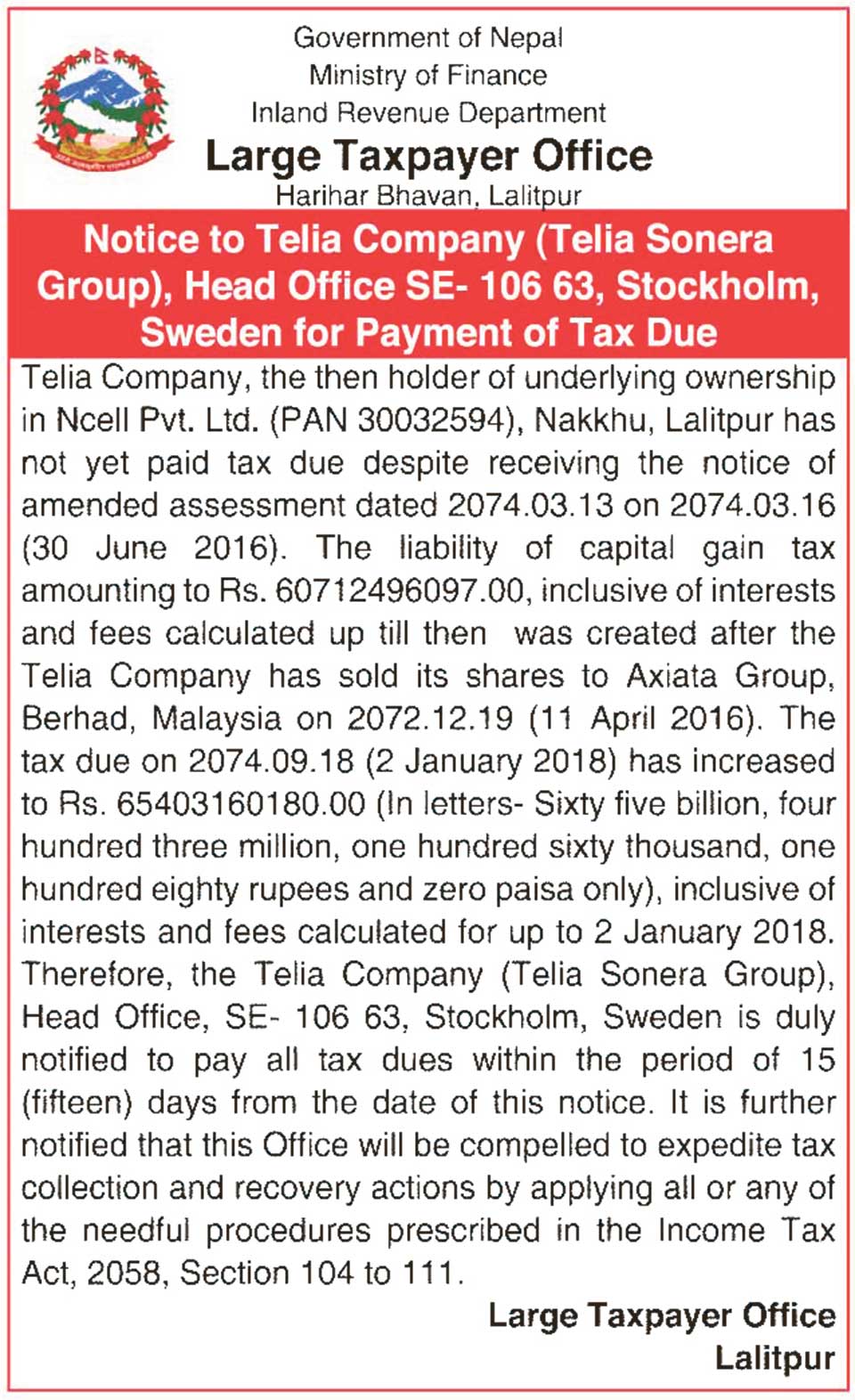 Issuing a public notice in different newspapers on Wednesday, LTO asked the company headquartered in Stockholm, Sweden, to pay capital gains tax (CGT) on the sale of shares in Ncell to Malaysian telecommunication giant Axiata Group.

LTO officials said that the public notice is a part of the process of recovering tax from the seller company. They added that the public notice was published after the Swedish company did not respond to the LTO's letter sent in July, despite receiving it.
LTO had sent the letter through courier company DHL and DHL have given confirmation of the delivery of the letter to Telia Company, according to officials.

The public notice states that Telia owes Rs 60.71 billion inclusive all payable tax, interest and fees as assessed on June 30, 2017, to the LTO. Telia's liability has increased by Rs 4.69 billion as per the tax and interest assessment made on January 2, 2018.

“Telia Company of Stockholm, Sweden is duly notified to pay all tax dues within the period of 15 days from the date of this notice. It is further notified that this office will be compelled to expedite tax collection and recovery actions by applying all or any needful procedures prescribed in the Income Tax Act, 2002,” reads the notice.
LTO also has warned that it would take further action as per Section 104 to 111 of the Act if Telia failed to settle its tax liabilities with it.

Further action includes seizing of the company's property in Nepal and public auction of the property to recover the dues, among others.

A division bench of Justices Om Prakash Mishra and Kedar Prasad Chalise on December 25 allowed the company to repatriate its profits, stating that obstruction to repatriate its earning would affect the company. The apex court, however, is yet to give its final verdict in the case.

An official of LTO, who preferred anonymity as the case is subjudice, said that the court's order does not mean that Telia can walk free without paying taxes. “The public notice is a part of due recovery process,” the official added.

Telia has been maintaining that the share transfer deal is not taxable in Nepal.
Ncell has paid CGT worth Rs 23.6 billion to the government in two installments -- Rs 9.87 billion in May 2016 and Rs 13.6 billion in June last year.