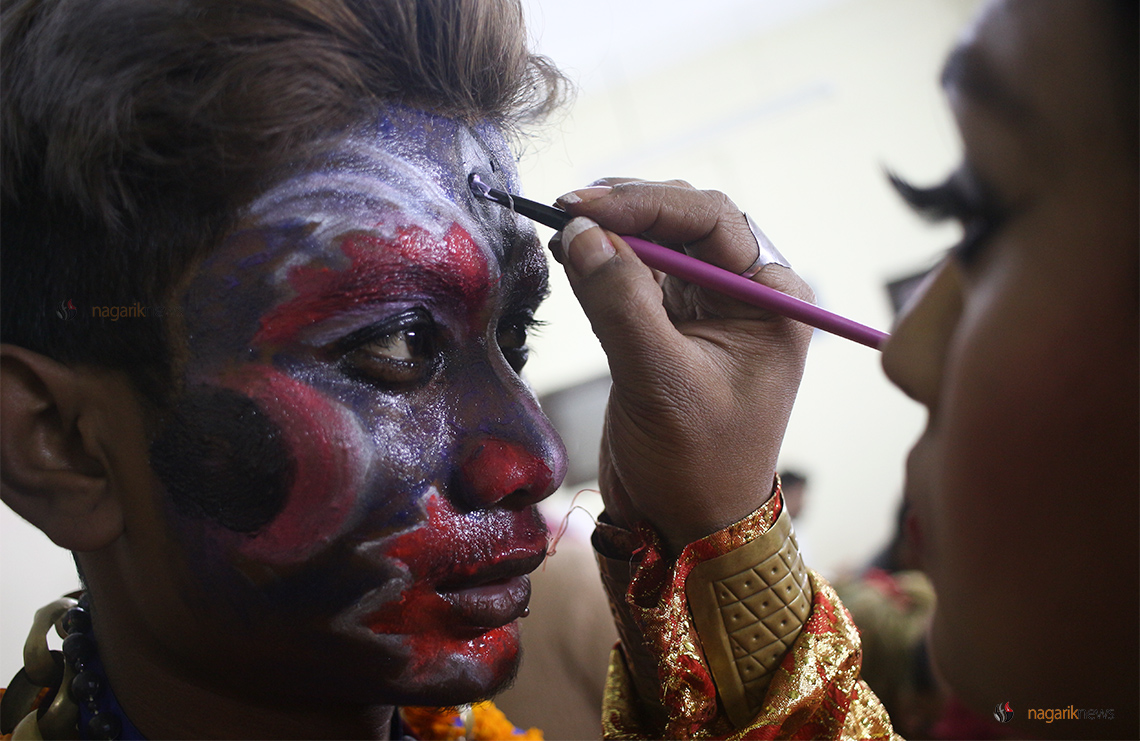 As the world marks a New Year, Republica Online looked back into Nepal in 2017 to bring a comprehensive year digest. Five noted persons passed away this year and the death of 10 year girl after falling into drainage during monsoon caused outrage in Kathmandu. The Prime Minister did order the government to fix all potholes within 15 days but the order saw weak implementation. The country also mourned deaths of three fire fighters in Super Gas Industry, Birgunj, a temporary police in Kalikot and those deceased in accidents across the country, including the Trishuli bus plunge.

In Kathmandu valley, pollution continues to choke its residents; home to more than three million people has turned into Mask-mandu. Then, there were controversies, political and social. The latest was Rani Pokhari where Deputy Mayor of Kathmandu locked the ancient pond and the Mayor rushed to break the lock. After meeting with the Department of Archeology, the Mayor has now decided to reconstruct the ancient pond as per its original Malla architect.

The local level elections, which took place after almost two decades was one of the major political milestones. This was followed by the two elections; federal and provincial assembly elections in November and December. The political deadlock, caused by debate between the CPN-UML and Nepali Congress, on the National Assembly Election Ordinance was finally resolved after the President Bidhya Devi Bhandari authenticated it on December 29.

Less than two weeks into the new year,  the Supreme Court ruled that Lokman Singh Karki was not qualified to head the Commission for Investigation of Abuse of Authority (CIAA), for reasons of academic credentials and past record. Karki, who had managed to land the top job at the anti-graft watchdog at a time when parliament was not in session, was also accused of abusing his authority to silence opponents.

The ruling Nepali Congress and the CPN (Maoist Center) registered an impeachment motion against Supreme Court Chief Justice Sushila Karki. It was Chief Justice Karki who had ruled anti-graft chief Karki unqualified, and in doing so earned the goodwill of the public. In the impeachment motion against the chief justice that was tabled in parliament out of the blue, the ruling parties made various accusations against her,  including promoting groups and undermining the functioning of the executive.

Anjali Lama, who has made a name for herself in the Nepalese fashion industry, became the first Nepali transgender model to walk the ramp for Lakme Fashion Week (LFW) Summer/Resort 2017 at JioGarden, Bandra-Kurla Complex in Mumbai. Lama’s struggle has been documented in "Anjali -- Living Inside Someone Else's Skin", a film based on transsexual lives.

The fire at Magic Footwear Industry in Tankisunawari of Morang was doused after 13 hours. The fire gutted seven buildings of the factory and goods worth Rs. 500 million were destroyed. The fire started after a transformer exploded in the factory.

The Supreme Court (SC) annulled the government’s decision to appoint Deputy Inspector General (DIG) Jaya Bahadur Chand as the Inspector General of Nepal Police. The government later recommended Prakash Aryal. Nepal’s Supreme Court upheld the government’s decision to appoint Prakash Aryal as the country’s police chief, laying rest a bitter row between the judiciary and the executive wings of the state.A ‘full bench’ of the court, headed by Chief Justice Gopal Prasd Parajuly scrapped a writ petition filed by DIG Nawaraj Silwal challenging the appointment of Aryal to the post.

From Baishak 1, 2074, Nepali New Year, the Kathmandu Metropolitan City brought a rule of ‘no horns in Kathmandu’ except in an emergency case. The ‘No Horn Please’ rule will took into effect to control sound pollution in the Capital.

Min Bahadur Sherchan, the oldest mountaineer of Nepal, passed away due to cardiac arrest at the Everest Base Camp on Saturday evening. He was 86. Sherchan, who hailed from Tatopani in Myagdi, left Kathmadu on April 16 to scale the highest summit to reclaim his lost title of the world’s oldest mountaineer to climb Everest. In 2010, Sherchan had climbed Everest at the age of 76 and recorded his name in the Guinness Book of World Records the same year. Five years later, his record was broken by an 80-year-old Japanese national, Yuichiro Miura.

Democratic leader Marshal Julum Shakya, 77, passed away in Grande Hospital, Kathmandu. Shakya was suffering from heart and kidney ailments for a long time. Shakya was actively involved in the democratic movement of Nepal and served a 15-year-long jail term during Panchayat era. He also went underground for two years during the autocratic regime. He was one of the founding members of Nepal Student Union, the sister organization of Nepali Congress, established in the 1970s.

The Commission for the Investigation of Abuse of Authority (CIAA) arrested Inland Revenue Department Director General Chudamani Sharma on the charge of multiple involvements in corruption while fixing the tax liabilities of large industrial entities. The complaints against Sharma accused him of corruption to the tune of millions in state funds through waiver of taxes for various firms. Sharma was accused of involvement in not recovering tax from Ncell, in waiving tax for the business community and accumulating property worth millions through abuse of authority.

Ncell paid an additional Rs 13.6 billion to the government as capital gains tax on its share buyout that took place over two years ago.  With Rs. 13.6 billion tax collection, the government received a total of Rs 26.4 billion from Ncell share transfer deal. Malaysian Telecom Giant Axiata had bought 80 percent stakes in Ncell from Swedish Company TeliaSonera at the price of US$1.03 billion. Ncell paid Rs 9.97 billion CGT in May last year.

Girl dies after falling in drainage

Ten year Binita Phuyal fell inside awater drainage while finding her in the water logged roads of Nepaltar. Binita was swept down to Mahadev River. After an hour’s search by the police, she was rescued alive. However, she was declared dead by the hospital at around 6:30 pm.

Film Director Nilu Doma Sherpa has passed away apparently due to cardiac arrest on Saturday morning. Sherpa, a prominent director in Nepali film industry directed ‘How Funny’. Apart from being a director, Sherpa was also a leading advocate for the LGBTIQ community and one of the first openly third-gender persons to make a feature film in Nepal.

Well known tourism entrepreneurs were found to be in the forefront in illegally encroaching on Fewa Lake, in the tourist hub of Pokhara. The Lamichhane Report stated that land mafias had registered a total 1692 ropanis of land belonging to Fewa Lake in their private ownership. Fewa Lake, which spread across 22,000 ropanis of land back in 2018 B.S. has now shrunk to 4.20 square kilometers. Karna Shakya, initiator of 'Positive Thinking' campaign, hotelier Piyush Bahadur Amatya and surgeon Jagadish Lal Baidya are some of the prominent names involved in the encroachment.

The Terai flood killed 131 people, injured 30. Another 32 people went missing.  Agriculture sector incurred loss of Rs. 8.11 billion while irrigation systems worth Rs. 2.42 billion were damaged. Thirty one districts (21 in Terai) were severely affected by the flood.

The Ministry of Education sacked Dolindra Prasad Sharma, chairman and general manager of the Sajha  Prakashan in allegation of multiple irregularities. Irregularities included appointment of staff close to political leaders and media persons, not carrying out audit after being appointed as GM of Sajha, not maintaining records of annual incomes and book publications, using Sajha logo using in private publishers, transferring   Rs 5 million from Sajha to GM's account, and GM also serving as chairman against the rules.

Thirty one passengers were killed and 16 sustained injuries when a bus plunged into the Trishuli River in a fatal road mishap that took place in Dhading. The bus (Na 6 Kha 1467) was en route to Kathmandu from Rajbiraj of Saptari when it skidded off the road and plunged into the river at Bangemode, Gajuri Rural Municipality-5 of Dhading.

With joint efforts of tourism entrepreneurs, local activists, local bodies and Kathmandu Metropolitan Traffic Police Division, Thamel became a no vehicle zone from October. The decision was taken to help tourists and pedestrians get rid of problems caused by increasing traffic in the area. Thamel is one of the busiest tourist hubs in the country.

Chairperson of Federation of Contractors Association of Nepal (FCAN) Sharad Kumar Gauchan was shot dead by an unidentified group in New Baneshwar on Monday afternoon. Samirman Singh Basnyat, the alleged mastermind behind the murder of Gauchan was made public on December.

President Bidya Devi Bhandari issued the Medical Education Ordinance recommended by the Mathema taskforce. The Ordinance, which provisioned setting up at least one government-run medical colleges in all seven provinces of the country and places a moratorium on opening new medical colleges in the Kathmandu Valley for the next ten years is a milestone in medical education reform.

Kriti Nidhi Bista, a three-time prime minister remembered for his life-long stand for national interests and clean public image, passed away in November, 2017. He was 91. Bista served as the country's prime minister three times during the Panchayat system from 1969-1970, 1971-1973 and 1977-1979. Bista is remembered for his integrity and taking a firm stance on national interests in crucial situations. His decisions include

Prakash Dahal, the central member of CPN (Maoist Center) and son of Chairperson, Pushpa Kamal Dahal died due to cardiac arrest on November 2017.

Violence escalated in Kalikot after the police allegedly shot dead a temporary cop involved in protest on Friday. The temporary police were staging protests in front of the District Police Office (DPO) seeking clarification regarding the misappropriation of their salaries. While trying to disperse the crowd, police reportedly shot dead Bibek Aidi, 20, of Raskot Rural Municipality ward no 2.

KMC Mayor Bidya Sundar Shakya was flanked after his decisions to demolish Bag Durbar and use concrete walls in Rani Pokhari surfaced. The Department of Archaeology has barred the Metropolitan not to demolish the old structure. Instead, it has urged the Mayor to retrofit the building as it was still functional. Likewise, the use of concrete materials to restore Rani Pokhari has also seen a public outcry. Following the debate, Shakya said that Rani Pokhari would be reconstructed as per the recommendations of Department of Archaeology with minor changes from Shakya.

Three firefighters lost their lives in their attempts to douse the fire of Super Gas Industry at Birgunj. The fire was brought under control almost after eight hours.

Pashupatinath temple complex has been declared a ‘no-go zone’ for vehicles, except ambulance and hearse.No vehicle will be allowed to pass through Dakshina Murti, Itapakha-Bhuwaneshwor Chowk, Dathutol-Annapurna Bhandar, Gaushala-Bhuwaneshwor Chowk, Bankali Dharmashala-Bakuntol and Char Shivalaya-Dakshin Gate.

The first biggest club cricket Twenty20 games, the Everest Premier League was held. The League has been considered a milestone to promote the game.

Nepal slips one step down to 171st position in FIFA rankings

KATHMANDU, Aug 9: Nepali skies have claimed the lives of more than 738 people in 55 air accidents over the past... Read More...

In Pictures: Protest against Citizenship Bill
41 minutes ago