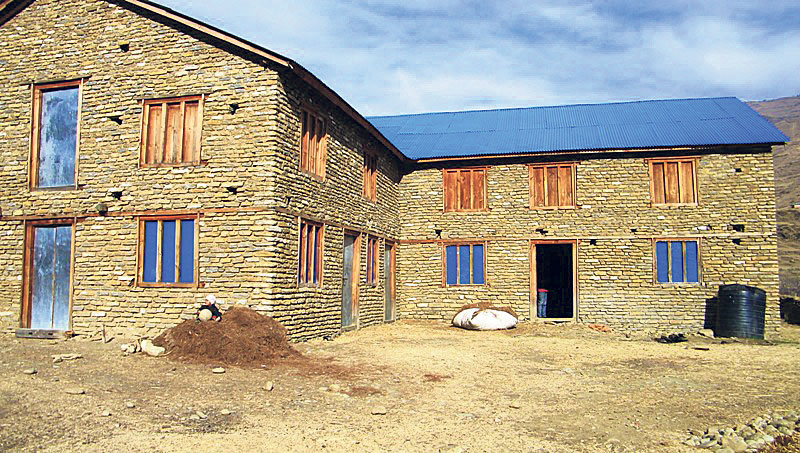 JUMLA, Dec 29: A farmer from Chandan Nath Municipality of Jumla, Til Bahadur Giri, had set up a cow farming industry in collaboration with few other people six years ago. But his hopes of earning a handsome share of money from the business have gone in vain.

The cow farming industry supported by High Mountain Agribusiness and Livelihood Improvement (HIMALI) Project in the municipality has collapsed due to a dispute among members of the industry.

The HIMALI Project, launched by Department of Livestock Services (DoLS) and supported by Asian Development Bank (ADB), is a program intended to support high-mountain people by providing them employment and other income-generating opportunities.

The farm ran for four years, but eventually collapsed due to lack of support from the HIMALI Project, differences among the members of the farming industry committee.

The cow farming industry was started after the HIMALI Project approved a proposal from a group of farmers under the leadership of Amar Rawat. The farm was established starting with 15 jersey cows in 2011 and the number of cows were increased later.

About Rs 90,000 was invested per cow for transportation from Kathmandu to the farm in Jumla. The cowsheds were built with an investment of Rs 3.7 million on a land leased from locals with the support from the project.

“I had a dream of establishing an exemplar cow rearing industry in the district, but differences among partners in the group destroyed it,” said Giri. “Our plans of five years got expired just after a year of starting the business. Each of us has now taken four cows from the farm after its collapse.”
After the cows were divided, there was an agreement among the group members that the wood and other parts of the building would be divided equally among them. Giri said that the cowshed-building has been abandoned by the group, and they are not in a condition to manage it.

The group members have also not paid the rent for the land, according to the locals. The owner of the land has laid claim on the building, saying that it is located on his land.

The members of the farming group have not taken any step towards managing the building after HIMAL Project said that it would establish an office in the building.

“Amar Rawat, the president of the group, did not show us the details of the industry’s account. The HIMALI Project did not coordinate with other members regarding the accounts,” said Giri. “I along with other members had made complaints with the police too.”

“We had to divide the cows among us despite the possibilities of the farm. In earlier years, cows were giving milk produce about two to 31 liters each day. Earnings from manures were also good,” added Giri.

There are 70 such business projects in the district, most of which are not operating properly.
The HIMALI Project has supported livestock rearing, farming of vegetables and medicinal herbs as well as handmade paper industries in the district.

“Investments in group businesses have not been much successful in the district despite the possibilities,” said Narayan Shrestha, agribusiness expert at the HIMALI Project. “Topographical difficulties and lack of professional knowledge are the reasons behind the failure of such businesses.”

Federal Democratic Republic came through the sacrifices of martyrs: PM Dahal
5 minutes ago