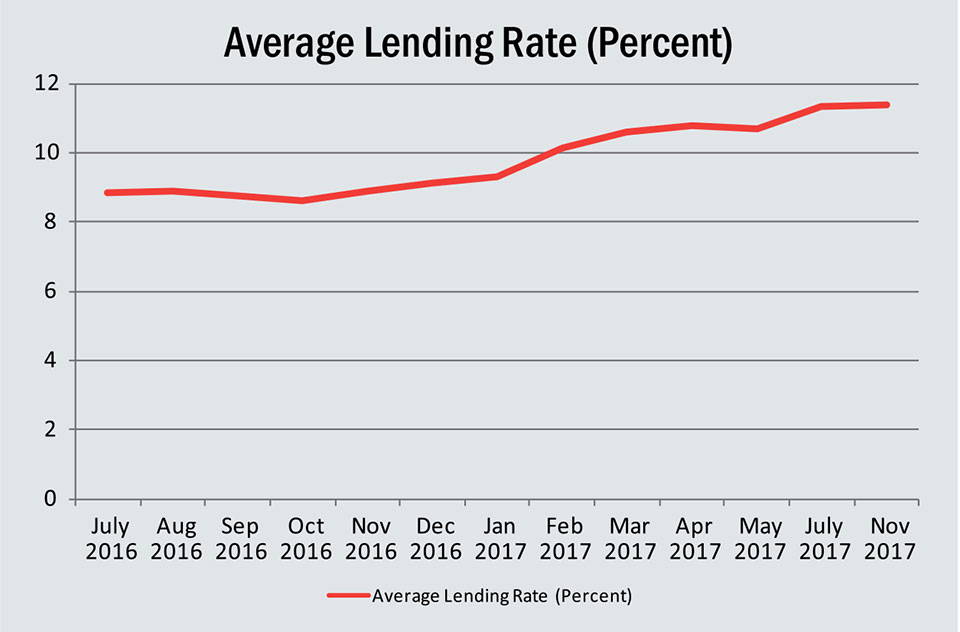 KATHMANDU, Dec 29: Due to lack of farsightedness and aggressive lending practices among banks and financial institutions (BFIs), credit is getting very expensive for borrowers.

As lendable-fund-starved BFIs are in fierce competition to attract fresh deposits by offering higher interest rates, they are passing such higher cost on to their borrowers by charging them exorbitant interests. The deposit rates, particularly on fixed deposits, have already crossed double digits. Civil Bank Ltd on Thursday raised the fixed deposit rate to 12.22 percent for general public and joined the list of commercial banks increasing their deposit rates to attract funds. Many banks are collecting deposits from institutional depositors by offering them over 13 percent interest rates. Borrowers, particularly business firms, complain that BFIs have already jacked up lending rates by two to three percentage points. According to businesspersons, they are being charged up to 16 percent from BFIs on borrowing for business.

According to the data of the Nepal Rastra Bank (NRB), the interest rates are on a rising trend since the last two years. Since the interest rates charged by banks vary widely depending upon the types of loans and borrowers, the average rates may not reflect the real borrowing cost of the banking industry.

The sudden spike in the interest rates is a result of mismatch between the growth in deposits and loans of the BFIs. They are not allowed to lend more than 80 percent of what they have as core capital plus the deposit they have collected. Most of the banks are nearing the prudential lending limit and thus competing against each other to attract fresh deposits.

According to observers, the aggressive lending practice among the BFIs even when the deposit was rising at a very low pace has exacerbated the 'credit crunch'.

According to Nepal Bankers Association's latest data, lending of 28 commercial banks jumped 0.35 percent, or by Rs 7 billion, while their deposit base rose just 0.27 percent, or Rs 6 billion, in a week (between December 15 and December 22).

Many have attributed the aggressive lending practice among the banks to the pressure from their shareholders for higher dividends.

"We have been asking banks to increase lending cautiously. They seem to lack farsightedness in mobilizing resources," said Shiva Raj Shrestha, a deputy governor of the NRB.

The 'credit crunch' is likely to worsen further because the deposit base of the BFIs will deplete when taxpayers withdraw deposits to the tune of Rs 60 billion for paying taxes by mid-January, the end of the second quarter of the fiscal year. The treasury surplus maintained by the government due to low capital spending coupled with slowdown in remittance inflow has put a dent in the growth of deposit volume of the BFIs.

Bank executives, however, defend the growth in lending, citing that their forecast was based on the government spending.  "The lending target of banks was at a higher end as due to assumptions that the election spending, rise on capital spending and expenditures of local units will pump more cash into the banking system," said Gyanendra Dhungana, vice president of Nepal Bankers' Association (NBA).

KATHMANDU, Dec 28: Slow deposit growth has not restrained banks from ramping up their loan disbursements, indicating that lendable funds in... Read More...