Nepathya to hold concert on Maghe Sakranti in Narayangadh 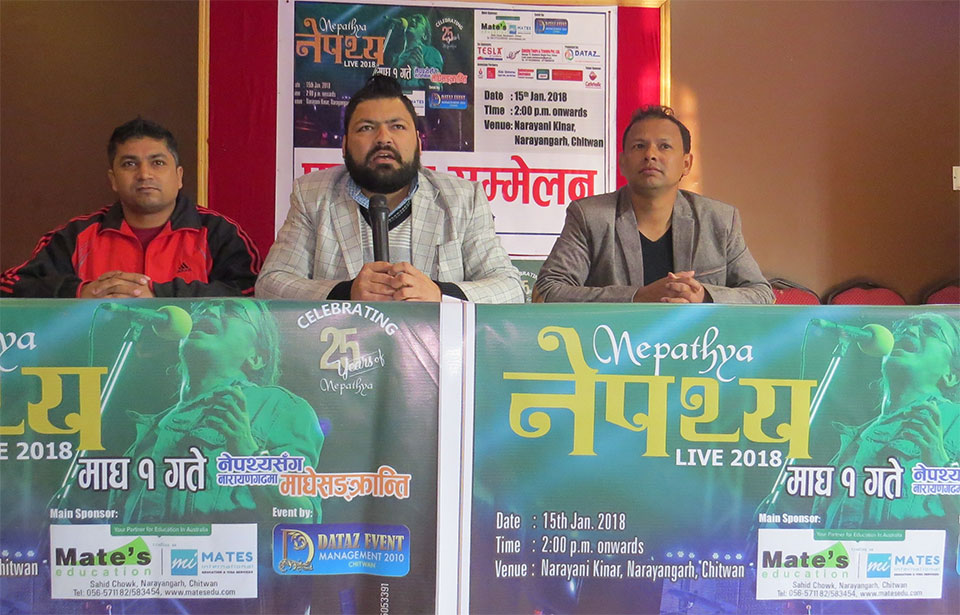 Organizers speaking at a press conference organized to inform about Nepathya Live-2018 in Bharatpur on Thursday. (Ramesh Paudel/Republica Online)

CHITWAN, Dec 28: Nepathya, a popular Nepali musical band, is all set to organize concert in Narayangadh on the occasion of Maghe Sankranti, a festival which falls on January 15.

Hundreds of people throng Devghat of Chitwan to take holy baths on Maghe Sakranti, which is also known as Makar Sakranti. Nepathya is going to hold the event after three years again in this place, capitalizing on the devotees.

Around 10, 000 people are expected to participate in the concert, according to the organizer.

“The ticket sale has begun. We are confident that around 10,000 music enthusiasts will turn up in the event,” Surya Adhikari, director of Nepathya Live-2018, told Republica Online.

The program is scheduled to start at 6 pm and will end at 9 pm on January 15.

The band is organizing this event on the occasion of its silver jubilee, said Dataram Ghimire of Dataj Event Management.

Nepathya to perform in Phidim

KATHMANDU, Jan 10: After completing the musical tour from east Mechi to west Mahakali, Nepathya is again planning to be... Read More...

8 killed, 7 missing in natural disasters in Ilam
8 hours ago