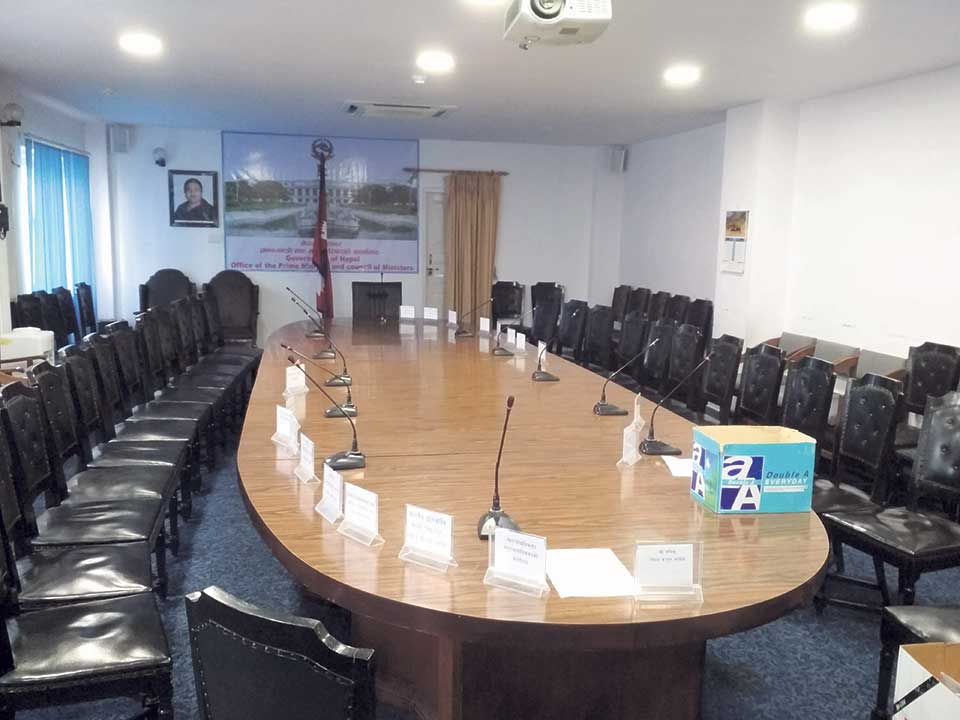 The office space designated for Maoist ministers, who are without portfolio, at Singha Durbar. Photo: Ashok Dahal

KATHMANDU, Dec 28: Ministers representing the CPN (Maoist Center) have stopped going to office after they were rendered without portfolio on September 18.  They also do not have any business going out in the field in their official capacity as they do not hold any ministerial portfolio.

The Office of the Prime Minister and Council of Ministers (OPMCM) asked the Maoist ministers if they needed office space and they responded that they would get back in touch if they decided to attend office.

“They have never attended office nor demanded secretariats at Singha Durbar after being rendered roleless,” OPMCM Joint Secretary Chiranjibi Paudel said. “We will provide office room and secretariats for them any time they decide to come.”

Maoist Minister Tek Bahadur Basnet admitted that ministers from the party have not turned up at office after their portfolios were taken away by the prime minister. “We don't go to Singha Durbar as we don't have any work. Since we don't have any office, our secretariats are also mobile just like us,” he said.

It has been two months and 10 days since the Maoist ministers have been enjoying state facilities without appearing at Singha Durbar. But the ministers, who have been demanding the resignation of Prime Minister Sher Bahadur Deuba on ethical grounds following the elections, are spending millions a month while doing nothing.
Officials at OPMCM said the 16 Maoist ministers without portfolio are drawing at least Rs 4 million a month in cash from state coffers as individual and administrative allowances. This expense does not include the costs the state bears for vehicles, security, residence and miscellaneous.

Each minister and state minister has been using at least two government vehicles.

A cabinet meeting in 2011 had fixed Rs 197,510 as the minimum monthly expenses including salaries for the secretariat of each minister. The meeting also fixed the monthly salary of a deputy prime minister at Rs 65,200.

Likewise, ministers receive Rs 60,970 and state ministers  57,780 as monthly salary. The government spends at least Rs 157,360 per month to run one such secretariat.

In addition to this, ministers receive monthly mobile expenses ranging from Rs 3,000 to 4,000 and a similar amount of hospitality in addition to Rs 3,000 as daily travel allowance. According to the sources at OPMCM, the state has been spending at least Rs 3,932,360 per month for the salary and monthly expenses of ministers and their secretariat teams, other than allowances.

The Maoist party forged an electoral alliance with the main opposition CPN-UML in September but it didn't quit the government despite a public outcry. Accusing the prime minister of plotting to postpone the polls, the Maoist ministers said that they would stay put in government to ensure the elections are held. But it has been a month since the first phase elections concluded and three weeks since the second phase.

Minister  Basnet said, “The context has changed. We will leave the government only after the prime minister steps down to pave the way for the new government.”   State minister of the same party Wangdi Sherpa said the government is yet to hold the National Assembly election.

OPMCM has arranged Room No 218 for ministers without portfolio, which is also being used as a meeting hall for the office. The room was empty when Republica went there on Wednesday.