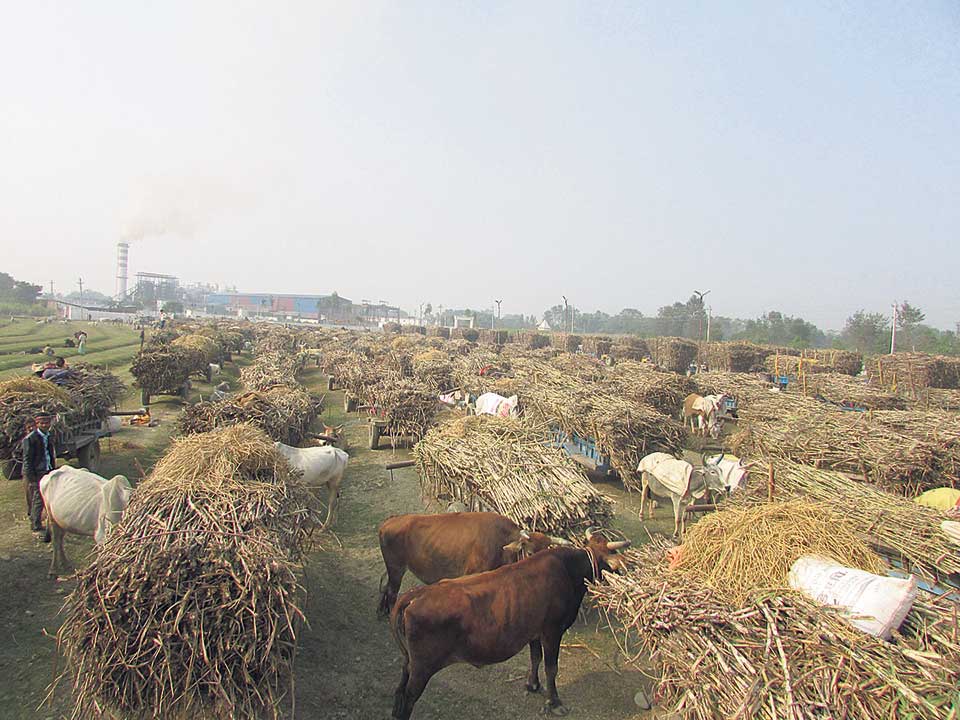 Sugarcane being transported on bullock carts to Annapurna Sugar and General Industries for processing. Photo: Republica

SARLAHI, Dec 26: Ram Binaya Raya of Khairwa Boharwa village, in southwestern part of Sarlahi district, has not received his payment for sugarcane worth Rs 125,000 from Annapurna Sugar and General Industries for the past three years. Yet Raya delivered fresh lot of sugarcane to the industry this year.

“Stockpiling sugarcane at home until the debt is paid is not an option. If it were food crops such as paddy, maize and wheat, I could have stored them and only sold when I received desired price. But for sugarcane, this is not viable,” Raya said.

Raya is an example among hundreds of farmers who have to sell cash crops such as sugarcane in credit.

“Last year I had supplied 500 quintals of sugarcane, of which I am yet to receive Rs 68,000,” said Kebal Shah, a farmer from Dhangadha.

Suresh Yadav, another local who has been farming sugarcane for the last seven years, rejoiced when Annapurna’s factory came into operation five years ago. “As a sugar processing factory was set up nearby, we expected easier access to the market and simple deposit procedure. However after the constant delays in payment, we feel that it would have been easier working with other sugar industries which would have collected sugarcane from the area,” Yadav said, adding that he would receive at least a small amount from other contractors.

Chairman of Sugarcane Producers’ Association, Kapilmuni Mainali, accused the industrialists of exploiting the farmers’ labor. “Despite several requests made by the farmers, industries like Annapurna have failed to clear the farmer’s dues. It seems as if their motive is to leave the farmers to die,” said Mainali.

The director of Annapurna Sugar and General Industries, Arun Kumar Singh, has however promised to clear all dues within a month. “Farmers will receive their old payments within a month and our dues for new supplies will be cleared in regular interval of time.” Singh said.

The old dues amount to almost Rs 65 million and the industry had aimed to crush 1.5 million quintals of sugarcane this year.

Sarlahi produces the most sugarcane in the country from its 26,000 hectares of land used for sugarcane farming.

SARLAHI, March 6: Sugarcane farmers in the district are agitated as the government has failed to provide them the promised subsidy,... Read More...

KATHMANDU, Oct 11: The House of Representative committee on industry, labour and consumers' welfare has directed the government to immediately... Read More...