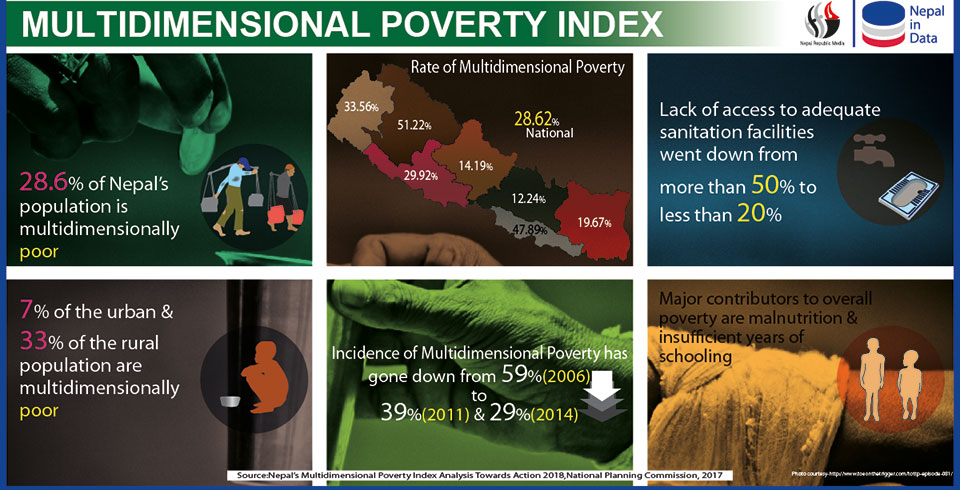 286 persons out of 1,000 are poor as per multi-dimensional indicators

KATHMANDU, Dec 21: The multi-dimensional poverty index, which counts deprivation under indicators including sanitation, drinking water, education and health, has halved in 8 years, according to the latest Multidimensional Poverty Index (MPI) report released by the National Planning Commission on Wednesday.

This calibration of deprivation under 10 indicators--2 for health, 2 for education and 6 for living standard-- is quite different from traditional poverty computations based on monetary measures. For the multidimensional index,  health, education and living standard have equal weightage. Under monetary measures,  22 percent of the population is now living below the poverty level.

In a comparison between Provinces 2 and 6, Province 2 has more children out of school, low school attendance and lack of improved sanitation while Province 6 has lower assets ownership and higher child mortality.

A disheartening find is that 41.6 percent in the 0- 9 years age group are living in multidimensional poverty.

The 10 deprivation indicators used in the survey include undernourished shown by underweight for age, death of a child in the last five-year period, no family members aged 10 or older completing 5 years of schooling, and any school-aged child not attending school. The other deprivations are measured on six indictors: cooking with dung, wood or charcoal; no improved sanitation or improved but shared with others; no improved drinking water or safe drinking water a minimum 30 minutes walk from home; no electricity; dirt, sand, dung floor or roof of thatch/palm leaf, sod, rustic mat, wood planks; not owning more than one of these --radio, TV, telephone , bicycle, motorbike, or refrigerator-- as  well as   not  owning a car or truck.

Speaking at the report launch function, Vice-chairman of the National Planning Commission Swarnim Wagle said  these indicators, which are based particularly  on the new provincial units, are helpful for more rational resource allocation and distribution.
Sabina Alkire, director of Oxford Poverty and Human Initiative (OPHI) , said the scale of national poverty reduction was 'both dramatic and encouraging'. She said, "The poverty level can easily be reduced to  single digit  by 2030 even with just business as usual." NPC worked together with OPHI to do the survey and analyze the data.

"This more scientific method of measuring poverty level in the province level has provided new data which can be useful for the proper allocation of resources," added Wagle noting that they had faced a real problem while formulating the budget for this year without any data om the local units and provinces.

"Major investments in health and education will be necessary to lift the poorest of the poor out of multidimensional poverty. Further, in order to reduce regional inequalities across provinces, greater interventions for the poorest provinces are required," says the report.

Mired in poverty, Afghans bring their children to work

KABUL, July 24: Every day before dawn, 10-year-old Kamran goes to work with his father and other relatives at a... Read More...