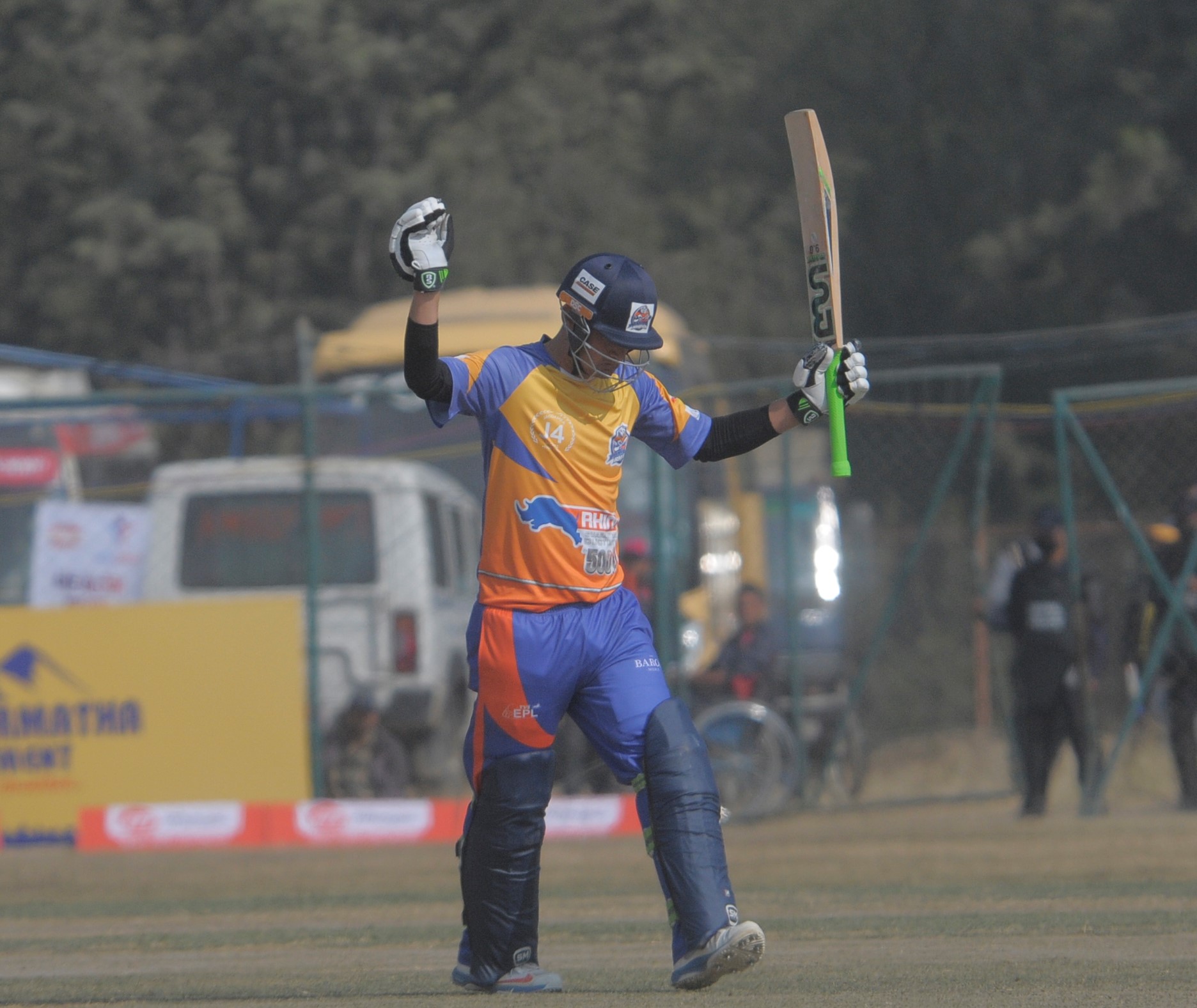 Early start should be re-scheduled

The first match of the day 2 of Everest Premier League was scheduled to start at 9 AM Nepali standard time. However, the start was delayed by 15 minutes due to a wet outfield caused by overnight dew. As the winter increases day by day in Kathmandu it will be a more regular thing. So if in hindsight, it can be re-scheduled to 9:30, it would be better for the teams and organizers in tandem. In only 5 overs ball was all wet and was changed after a long delay of about 5 to 7 minutes in the middle of the match. To avoid any such circumstances, a re-scheduling can definitely help.

A batsman having a strike rate of 50 after playing 29 deliveries in the seventh over of the match is definitely not t20 batting.  Later, Anil Mandal did cover some ground but an innings for 32 from 44 deliveries is not what a T20 team will expect from his opener. Especially after so many young players are waiting for their well-deserved chances. People were berserk when he went unsold at the auctions but was roped in later by Chitwan Tigers after Subash Khakurel withdrew his name citing hand injury. Again when someone like Dipendra Singh Airee is going all guns blazing at the other end, such batting breaks the much important momentum in t20 cricket.

Israrullah and Taj Wali clearly made their presence felt as the former took four important wickets of Airee, Mandal, Sarki and Yogendra breaking the back of the Tigers batting and similarly, Taj Wali was ever immaculate with his line and length keep the batsmen on the check and piling up the pressure by continuously delivering dot balls. His extra pace was too hot to handle for Tigers batsmen conceding three wickets including two in the last over of the match. Asif Ali was not even needed today in batting as Israrullah remained unbeaten scoring his first fifty of Everest Premier League. The first class cricketers are making their mark in the tournament. Pokhara Rhinos might just have the best trio of foreign players in the tournament.

India vs. Pakistan in Nepal

When Pramesh Kumar was bowling to Israrullah at the start of the second innings of the first match of the Day 2 it was a little moment of rivalry between two nations. Both the nations don’t play each other in international cricket except ICC tournaments. Similarly, we hardly see them in any premier league events as Pakistan players are not allowed in IPL and Indian players are not seen in any overseas premier t20 leagues. It was a match between Pokhara Rhinos and Chitwan Tigers but both teams had only Pakistani and Indian players respectively as their overseas recruits making it a mini India vs Pakistan contest. Pakistan won by quite some margin today.

Rhinos had already made 73 runs in 12th over and Praveen Gupta was nowhere to be seen. A guy with 122 first-class wickets was not introduced in the bowling up until 13th over when only 40 runs were required for the victory. He bowled an excellent first over only conceding 2 runs beating Sunil Dhamala twice with extra bounce. Sunam Gautam had already bowled 3 overs before him conceding 23 runs being the most expensive bowler so far in the match. Something Airee needs to rectify in upcoming matches to change their fortunes in the tournament.

Everybody at the media box was excited to see the in-form Babar Hayat bat at Kirtipur in a T20 match. Aasif was dismissed in the second over of the match. A loud cheer erupted in the crowd as Hayat walked in to bat. Bhati had bowled brilliantly in the last match and tried to test Hayat with bouncer first up. The Hong Kong skipper smacked him for four over mid-on region. It was little display of brilliance that all were anticipating.  He went on to make 34 runs in the match falling to Sandeep Lamichhane.

Not always you will see a young batsman batting in partnership with Paras Khadka and not only be outscoring him but producing better shots than the Nepal national team’s skipper. Anil made 47 runs but was helped by Lalitpur Patriots poor fielding efforts as he was dropped twice. But the array of shots he displayed against likes of Bhati and Nagar really speaks volume about young lad’s talent and temperament. Paras Khadka was restricted to the front v arc by Gyanendra Malla struggling to let loose but Anil Sad kept finding the gaps and fences during his stay in the match. Deservedly adjudged man of the match ahead of more celebrated seniors and HK players.

Bouncer, short deliveries, full length, good length, yorkers, slowers, he could have bowled 12 different kinds of deliveries if it was possible. Produced dot balls and pressure caught up Kolsawala as he flashes at a short delivery outside off stump but only to be caught at slips. He started the defense with a perfect couple of overs opening spell and set up the match for Biratnagar. He again came back for death overs sealing the match for Warriors. He may not be the best fast bowler in Nepal right now but he sure is improving rapidly to be one.

Sahan Adeesha can be added to the long list of genuine fast bowlers playing in this year’s EPL. He was too hot to handle that wicketkeeper Aasif Sheikh couldn’t complete a regulation edge off Yogesh Nagar. Aasif wouldn’t have kept before for such pace. Not only that, Pawan Sarraf struggled to connect any of the first five deliveries that Adeesha bowled in his first over. Sompal Kami, Karan KC, Taj Wali, Subodh Bhati and now Sahan Adeesha can be added to that elusive list which is set to lighten the EPL.

Pawan Sarraf and his temperament

Before today he was known for his bowling. He one of the very few effective off-spinners in Nepal right now. He has been successful for the national U-19 team too. This year he is opening the batting for his franchise. In only his second outing as an opener, he managed to score a well-timed fifty. In fact, Lalitpur lost focus and momentum once he was dismissed and lost the match by mere 6 runs in the end. He may be limited to the number of shots in his arsenal for now but there is no doubt in his temperament as a player who is ready to take up any role for his respective teams. Nepali cricket suddenly looks rich in the talent pool. All they need is nurturing from concerned authority and administrative body which sadly is suspended.

One can predict the playing XI and batting order for Warriors tomorrow but it can't be said same for Gladiators.... Read More...