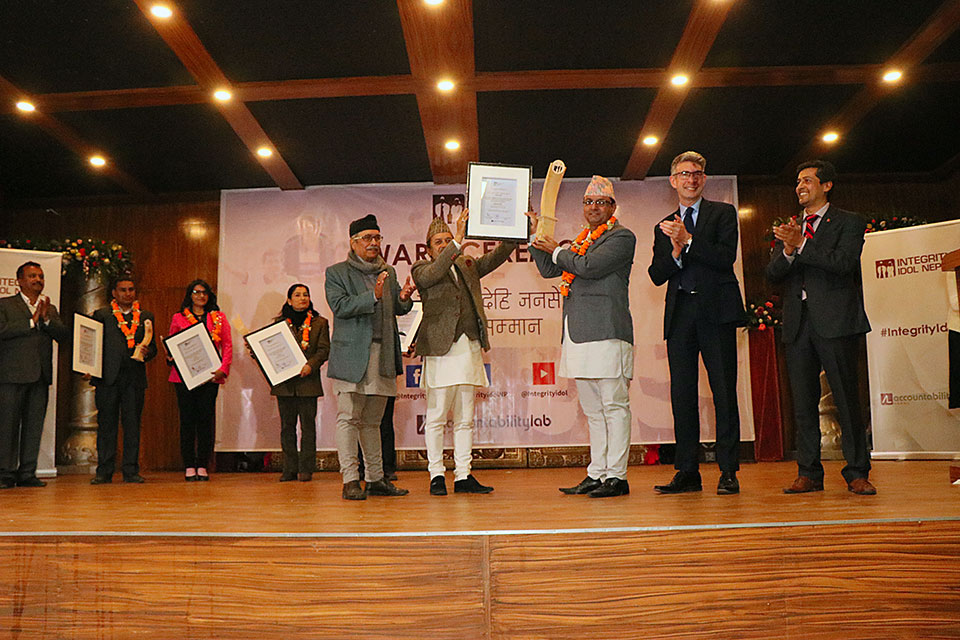 KATHMANDU, Dec 17: Shesh Narayan Poudel has been named Nepal's Integrity Idol-2017 for his efforts made to deliver government services to the public in an effective manner.

Early in his career, as the Chief District Officer of Baglung, Poudel noticed that residents of remote villages like Burdibang had to endure a costly and perilous journey to obtain citizenship or a passport. Worried over general public’s woes he decided to bring those services to the people.

More recently, Poudel won praise for managing the emergency response during this year’s Terai floods in Nepal. As Morang’s Chief District Officer, he dispatched public workers to go door to door visiting victims and set up a system to disseminate information to citizens and the media. Poudel carried out similar action during the 2015 earthquake and also organized mobile camps in places where public services are minimal.

“I commit to serve as a public servant with more honesty and focus my every day efforts to assists citizen. This award has instilled more responsibility in me and has motivated me to continue to do better,” said Poudel after receiving award.

At the function, Umesh Mainali, Chairperson of the Public Service Commission, stressed on the need of promoting public service more people-oriented but not just only be excellence on promotion exams.

Now a global initiative, Integrity Idol began in Nepal as a way to recognize and inspire upstanding government officials. The four other finalists in the 2017 competition include Sabnam Pathak, an assistant forest officer in Kathmandu; Shabraj Bam, a teacher at Panchadev Secondary School of Kalikot; Srijana Tiwari, an Under Secretary in the ministry of General Administration, Kathmandu and finally Krishna Dhital, a Field Extension Officer of Agricultural Department, Dhulikhel.

“We saw an incredible energy today from the youths of Nepal calling for a better future through increased integrity from government leaders,” noted Narayan Adhikari, Chief Executive Officer of Accountability Lab Nepal. “I encourage all young people in Nepal to join us in this effort to ‘name and fame’ the leaders who uphold the Nepali values of honesty, integrity and accountability.” In a society where corrupts has highly regarded but people like these idols have the situation to hide themselves. We, through integrity Idol want to make these people highlight.

Richard Morris, British ambassador to Nepal, who was present at the meeting said that he was inspired by this movement that was “largely led by people to name and fame the honest government officials.”

Integrity Idol is a citizen-run movement to identify and celebrate upstanding government officials. Originating in Nepal in 2014, Integrity Idol has since evolved into a global campaign in Nepal, Liberia, Pakistan, Nigeria, DR Congo and Mali while it is also being planned in many other countries such as Sri Lanka and South Africa.

A movie by an Iranian who was arrested for his work in Iran won the ‘Un Certain Regard’ competition at... Read More...