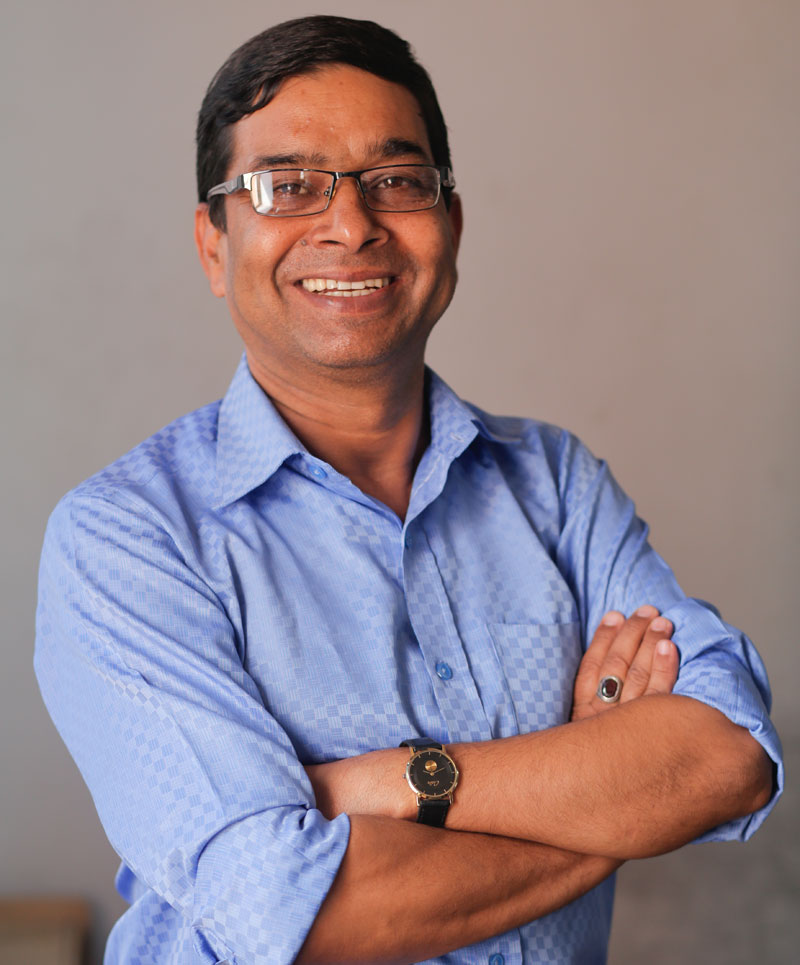 Being addicted to reading is a good thing, and that gets even better when there are words to keep you riveted. Rajendra Parajuli weaves tales based on social and political issues with such intricacy that you can’t help but be hooked. With his newest compilation of short stories – Sukraraj Shastri ko Ulto Chasma – he has managed to do that and more. He spoke to Reya Shreya Rai about his experience in the field of Nepali literature and how it has progressed in the last few years.

Your stories deal with political and social issues. What sort of impact are you trying to have through your writings?

I transform social and political issues into stories. Undoubtedly, when we start talking about politics, society comes into the picture as well. Romance is something that you can hardly find in my books. Basically, I write about the society so that people are aware of the kinds of issues we deal with on a regular basis. I want to make people look at our society from a third person’s perspective and look at it through a microscope.

You are both a journalist and a writer. What are the differences between working for a newspaper and working as an independent writer?

Before joining Nagarik, I used to write for Kantipur as a literary critic, focusing on the state of literature in Nepal. I used to write for Nagarik as well but most of my literary articles were published in Himal Khabarpatrika. I’ve been in this field long enough to know how it works and there is a huge difference between working for a newspaper and working on your own book. Newspaper writing can also be called as literature written in haste. The words that I use on newspaper articles are straightforward and easy to interpret. But writing a book is equivalent to making art and art takes a lot of time and patience.

Where do you get the inspiration for your books and how do you research for it?

The society is my inspiration. Discrimination based on castes, religion, politics, economics and people who are marginalized based on these factors are the type of subjects that fuel my inspiration to write. My research is mostly based on the positive or negative characters that I choose to portray in my stories. First a story generates itself in my mind, and as I start giving it a form, constructing the why and the how, I work on the characters of the story, concentrating on the situation that they are present in and focusing on what drives them to do what they do.

What do you think about the Nepali literature scene?

Recently, there has been a vast improvement in the field of literature. Popular fiction is something I do not indulge in but it has been inspiring youngsters to read more and give more emphasis to literary fiction. The readers who start with popular fiction might proceed to focus on literary fiction. But our literature scene definitely needs better books and better stories to be able to cater to them when they reach that stage.

And how do you think we can come up with better quality writing?

Personally I feel writers should research more before working on their books. We write about common folks but we do so with detachment. It’s almost like peeking from a 12th floor of a building and writing about how a man on the ground feels. Also, there are so many things that should be written about and yet we have just managed to touch the matters on the surface. Given the state of our country, there are so many issues that haven’t be dealt with in books. We could, perhaps, start by being more conscious of our surroundings and situations.

As a writer, what have you learnt?

In 1993, I published 500 copies of my first collection of short stories with my own pocket money. I was new to writing and thus inexperienced. Sometimes, rereading them, I now feel embarrassed. I should have revised and edited it more. Research is synonymous to writing. Now I know that and it’s something I devote a lot of time to. I work through at least five or six drafts and make my close writer friends read it and give me feedback as well. Taking criticism well and learning from it is important while writing.

Which books or author(s) have inspired you?

I prefer books that have a realistic theme and support existentialism. I really idolize Tehmina Durrani whose writings are rather controversial. Her awe-inspiring books like Blasphemy, and My Feudal Lord have had a profound impact on me. She has portrayed the life of suppressed Pakistani women with such vivid and intricate details that even thinking about certain lines and passages sends sends a shiver down my spine.

PYUTHAN, Feb 5:  Every year during monsoon, transportation comes to a halt in Jhimruk Rural Municipality-1, Sautamare of Pyuthan district due... Read More...

Rug weaving machine changes life of a woman in Sindhupalchowk