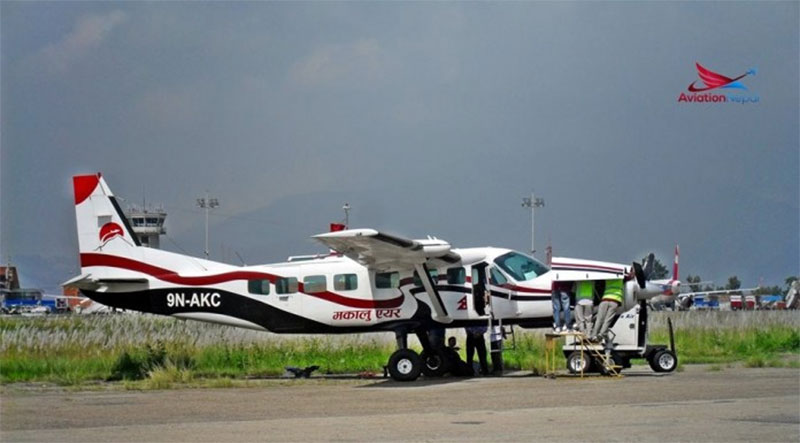 KOHOLPUR, Aug 4: A Makalu Air plane crashlanded in a river in Humla on Thursday afternoon leaving the pilot and co-pilot injured.

The single-engine aircraft with call sign 9NAKC was returning to Surkhet after transporting cargo to Simikot of Humla. There were just pilot Sange Lama and co-pilot Prashanta Shah in the plane. Four minutes after takeoff from Simikot, they noticed a problem in the engine and crashlanded the plane in the Helambu river.

The plane had landed in the river at 4:05 pm. The pilot and co-pilot had jumped into the river.

The pilot and co-pilot were airlifted to Nepalgunj by a Simrik Air helicopter. Both are safe, according to Santosh Adhikari, Air Traffic Controller at Nepalgunj airport.

The plane is still floating in the river, according to officials at Ranjha Airport, Nepalgunj.

Nepal's aviation sector is often criticized for its abysmal safety record. In February, an aircraft of Air Kasthamandap en route to Jumla from Nepalgunj, with 11 people on board had crashlanded at Chilkhaya of Kalikot district. The pilot and co-pilot were killed in the incident. After this incident, the Civil Aviation Authority of Nepal (CAAN) had suspended operation of all single-engine aircraft.

KATHMANDU, May 17: A Cessna 208B aircraft of Makalu Air flying to Simikot airport of Humla district from Surkhet airport  crashed... Read More...