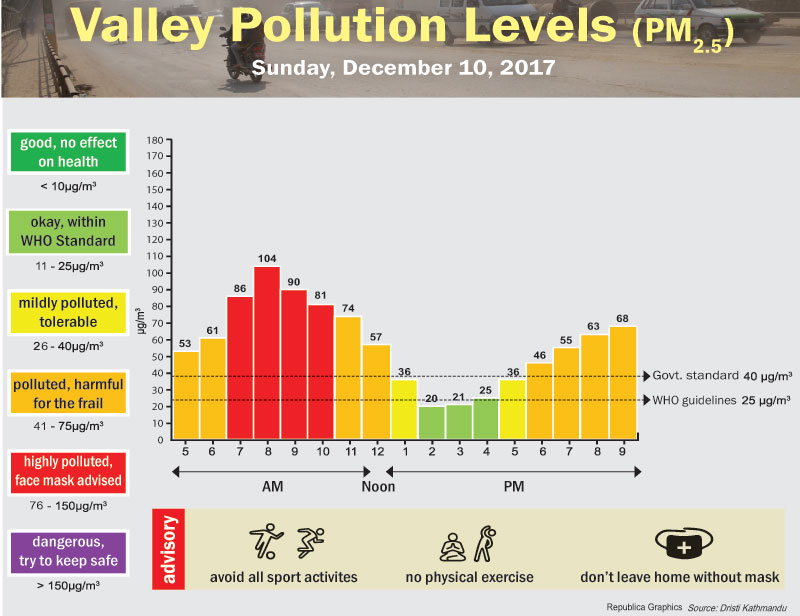 BEIJING, Dec 11: In November, the Indian Medical Association declared a public health emergency in New Delhi because of high levels of air pollution. Schools were shut and emergency traffic restrictions put in place. Air pollution in New Delhi is nearly 30 times the level considered safe by the World Health Organization, causing more damage to the lungs than smoking two packs of cigarettes a day. New Delhi is far from alone.

Our research into the impact of air pollution in China shows that, in addition to the more obvious physical toll, air pollution can also have serious negative effects on mental health and cognition, significantly reducing a person’s happiness and their scores in verbal and mathematical tests. Such deleterious mental effects have serious negative consequences for livelihoods and human capital development, suggesting that development strategies should go beyond the traditional focus of boosting GDP in the developing word.

India’s recent pollution emergency is the most dramatic incidence of hazardous air pollution, but smoggy skies have been a cause of growing concern in most developing countries. Major cities across the developing world—from Thailand, to Brazil, to Nigeria—frequently experience pollution at several times the WHO safe limits. In fact, 98 percent of cities with more than 100,000 residents in low and middle-income countries fail to meet the WHO’s air quality guidelines.

China’s extreme levels of air pollution are well recognized, and examining the effects provides clear warnings for other countries seeking fast growth through rapid industrialization. We used nationally representative longitudinal surveys on mental health and cognition, matched with daily air quality data for the time and place of interviews, to see what pollution does in a given time to individual happiness and cognitive performance. Because each person in our survey was observed multiple times, we can control for the effect of individual characteristics on the outcome variables.

We found that worsening air quality in China led to a decrease in happiness that day equivalent to about 10 percent of the reduced happiness one would experience from a negative major life event such as divorce. The poor air quality across much of China that has accompanied rapid industrialization and breakneck GDP growth could help to explain why several surveys have found stagnating or falling happiness in China since 2004.

Air pollution also significantly inhibits cognitive performance. We found that individuals exposed to polluted air when taking tests scored lower on both verbal and maths tests than when they were conducted under a clear sky. The cumulative effect of pollution on test scores is even more pronounced than the immediate effect.

An increase in the mean air pollution index for three years before testing had seven times the negative impact on scores than did a higher air pollution index on the testing day alone. The worse cumulative impact suggests that short-term measures to reduce pollution at times when enhanced mental capacity is needed, would do little to address the longer-term effects of exposure to harmful air. Similarly, though the effects on mental capacity were stronger for outdoor workers than for indoor workers, studies have shown that the smallest and most harmful air pollutants can, and do, enter buildings, so simply retreating indoors cannot spare us the ill effects.

Even though many of our findings show the connection between pollution and mental health in the moment, the high number of high pollution days each year in many developing countries suggest that these transitory effects could become more permanent. The stronger cumulative than immediate effect of pollution on cognitive abilities indicates that short-term measures such as restricting traffic or discouraging citizens to go outdoors will not be enough to clear the haze from our minds and lift our spirits.

More broadly, policymakers must consider the trade-offs of economic growth at the expense of our environment for both our physical and our mental health. Rapid economic development in recent years has brought millions out of poverty, drastically reducing hunger, disease and mortality. But in much of the world this rapid growth has brought with it hazardous levels of pollution.

Previous research has linked cumulative exposure to pollution to Alzheimer’s disease and other forms of dementia, as well as poor stock market performance, increased crime and reduced life expectancy. Such negative side effects of industrial growth have measurable impacts on livelihoods and general welfare. As developing nations strive to improve the lives of their citizens, the downsides of growth strategies should be part of the calculation.

(Xiaobo Zhang is a Senior Research Fellow in IFPRI’s Development Strategy and Governance Division and Professor of Economics in the National School of Development at Peking University. This post first appeared on the Financial Times beyondbrics blog.)