A hunt for Nepal's most honest government official 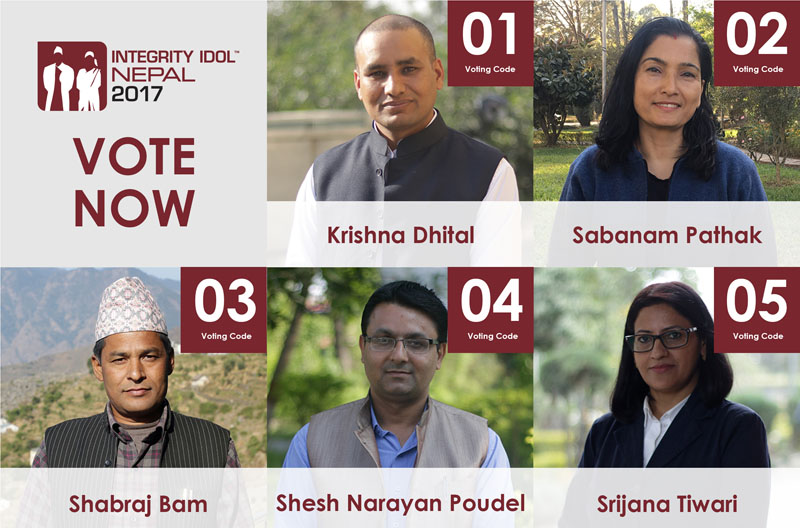 In line with the objective, five high performing civil servants have been shortlisted from over a thousand government officials from across the country for Integrity Idol 2017 award. The finalists were selected for the 4th edition of the award by a panel of independent experts led by former head of Commission for Investigation of Abuse of Authority Suryanath Upadhyay.

Agriculture extension officer Dhital has been playing a big role in helping Kavre's farmers shift from subsistence farming to commercial farming by moving away from traditional farming methods, doubling the district's agriculture production through better practices.

Mathematics teacher Bam changed the perspective of math being an intimidating subject for hundreds of students of rural Kalikot, whose failing in the subject discouraged many from going to school. He turned things to his favor by making his subject enjoyable through innovative teaching methods and storytelling.

Assistant CDO Poudel spearheaded citizenship distribution campaigns for people of extremely rural areas of Morang where citizens were forced to make travel through perilous route to the district headquarters for obtaining citizenship. His campaign and other activities have directly benefited thousands of people in the district.

Under-secretary Tiwari played a major role in persuading the government to prohibit women from migrating to gulf countries to work as housemaids, where the women were often tortured or abused. During her long tenure as public servant in various positions, she always managed to work with honesty and dedication to bring effective plans and its execution.

A lack of integrity remains at the heart of Nepal's challenges and citizens often feel like they are helpless to do anything about it, according to the organizer - Accountability Lab. "But through Integrity Idol they are engaging in a positive discussion about these issues and the people that can bring about change."

Following the selection, members of the general public are now open to vote for their favorite candidate, crowning one of them with the 'Integrity Idol 2017' award. They can choose their preferred contestant online or send them SMS vote after watching videos of them filmed by the organizer.

Voters are urged to support the candidate who they feel best embodies the values of integrity, transparency and accountability in the country's government offices. The winner will be announced on December 18 amid a public function in the capital, according to the organizer.

Narayan Adhikari, Country Representative of Accountability Lab, said, "The Integrity Idol campaign builds an ecosystem of integrity and celebrates it in a fun and positive way through the creative use of social media, technology and new media."

According to him, Integrity Idol generates support for those civil servants within the system who are serving the public good and provides a platform for these public servants to implement new ideas on accountability.

"Integrity Idol allows Nepali people to feel part of a positive movement to build integrity that they themselves can help advance," he further added.

Nepalis’ spirit after the earthquakes was Nepal’s most beautiful story

Omar Havana is a freelance photojournalist based in Cambodia. He lived in Nepal from 2014 to 2015. Omar recently published... Read More...