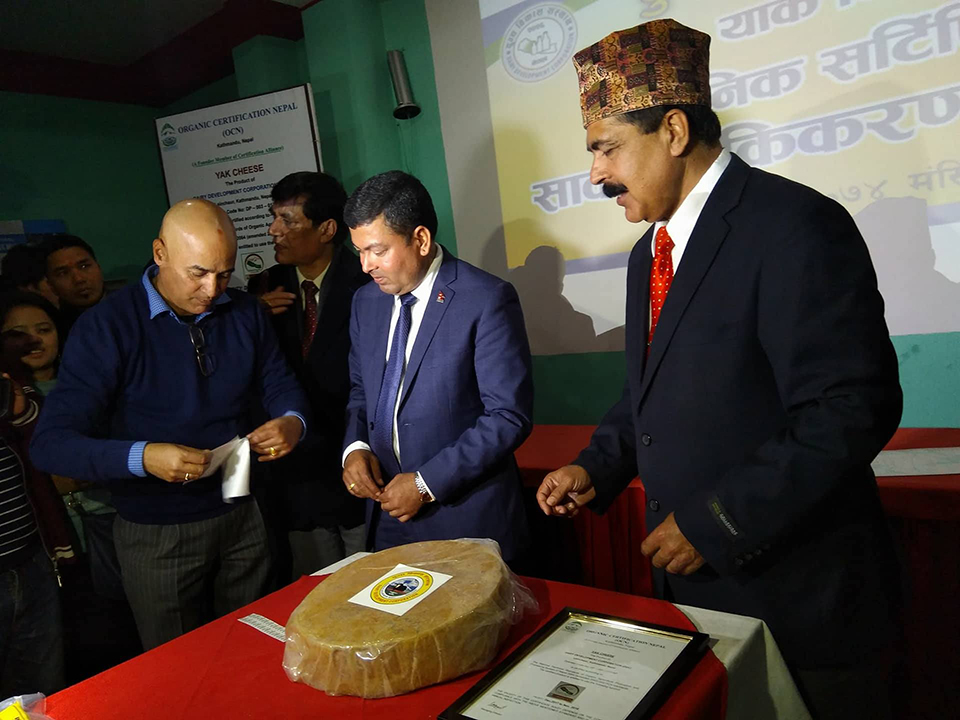 Production has halved over the past three decades.

KATHMANDU, Dec 5: Production of yak cheese has declined by almost 50 percent over the past three decades.

Three decades ago, Nepal used to produce more than 100s ton of yak cheese annually. But annual production fell down to 55 tons in Fiscal Year 2016/17, according to District Development Corporation (DDC).

Migration of people from the Himalayan region to hilly and Tarai region has impacted yak farming, according to Adhikari. “Yak farming is a very difficult profession. Farmers have to tend their cattle round the clock and always look for grazing grounds,” he said, adding: “Now, many farmers have shifted to other easier jobs.”

Stating that yak cheese has medicinal and nutritional benefits, Adhikari suggested to the government to introduce programs and incentives for farmers to attract them toward yak farming. “Farmers are not getting good price for yak milk. Realizing this fact, the government should provide them financial and technical support,” he added.

Shyam Prasad Poudel, the spokesperson for the Ministry of Livestock Development, said yak farming is declining despite of several efforts made by concerned government agencies. “We have put lot of efforts for yak preservation. But I must agree that such programs are not becoming much effective,” he said, adding: “Decreasing number of yak farmers, failure to adopt new technology, and lack of programs to encourage farmers toward yak farming are some of the reasons behind this.”

Programs launched by the government support farmers to purchase medicines and maintain grazing grounds for their cattle. According to Poudel, the government will start providing farmers grants for the preservation, promotion and production of yak from next year.

Yak cheese production started in Nepal in 1952 after a cheese factory was set up in Langtang of Rasuwa with the financial help of World Food Organization and technical support of the Swiss government.

The certification was issued as per the national technical standards of Organic Agriculture Production and Processing System of Nepal 2064 (amended 2065) and OCN standard.
OCN provided certification to DDC yak cheese amid an event organized in Kathmandu on Monday in the presence of representatives of OCN and DDC as well as the Ministry of Agriculture Development and the Ministry of Livestock Development.

Speaking at the program, Umesh Lama of OCN said that orange sticker will be provided to DDC's yak during the trial period. “We will give green sticker later on,” he said, adding: “We will now work to get international certification for yak cheese.”

Ishwori Prasad Adhikari, the spokesperson for the DDC said that organic certification is important to promote yak farming and increasing production of yak milk. “Our product will get a good price in the international market, once it receives international certification. Then we will be able to give good price to farmers,” he added.

Dolakha, Ramechhap and Solukhumbu are the leading producers of yak cheese in Nepal.