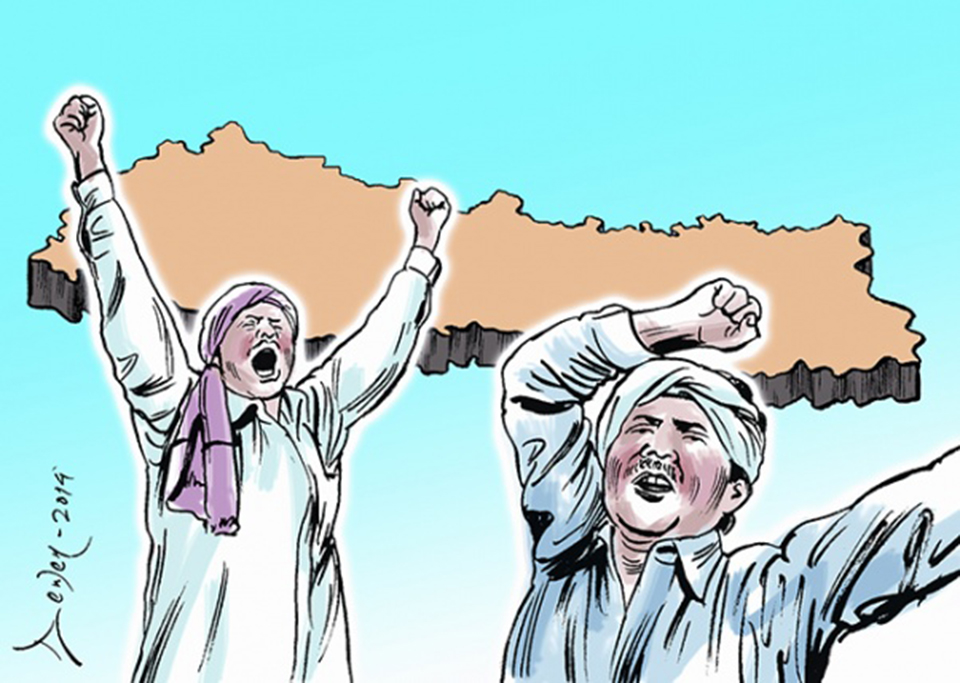 The author teaches politics at State University of New York at Geneseo
news@myrepublica.com

India’s posture determines the trajectory of these radical campaigns. India is known to encourage such anti-establishment groups.

After having successfully conducted the first phase of general elections, Nepal is gearing up for the second to be held on Thursday. First of their kind under the new constitution, these polls elect the national parliament as well as provincial assemblies and, therefore, complete the political transition Nepal had been in since the end of the Maoist uprising in 2006.

However, one section of the citizenry is clearly disgruntled by the new constitutional design— the Madhesi community in particular (comprising mainly Maithili, Bhojpuri, and Vajjika speaking people of Province 2).

As Madhes is heading to polls in the second phase, it is worth taking stock of the issues raised by the Madhes Movement, which is yet to reach its conclusion. Whither Madhes movement? Where is it heading? Is it a monolithic movement commanded by a coherent leadership or streaks of protests spearheaded by various factions with varying, and sometimes opposing, political interests? Is it slipping out of the control of the mainstream political forces and being taken over by radical outfits?

A subtle form of Madhes movement began with the establishment of the Tarai Congress during the Panchayat era and continued with the establishment of the Sadbhawana Party by Gajendra Narayan Singh in the post-1990 democratic era. However, the movement manifested a more aggressive form during the tense times when the peace process was delayed by a series of protracted negotiations. The movement began in the form of a civil society protest in 2007 when the mainstream political parties reneged on an earlier promise to establish a federal system. This provided the Madhesis an outlet to express their resentment over decades of social and political discrimination.

Politically, the movement was successful in reestablishing the federal agenda that the Maoists had once floated but abandoned during negotiations with the establishment. Its social achievement was more palpable. It not only dignified the Madhesi (as opposed to derogative ‘Madise’) identity but also earned them the respect they deserved.

As the new atmosphere encouraged more political actors to join the fray, the list of demands became longer. Madhesi parties were engaged in a round of political one-upmanship in an attempt to show that they represented the region better. Most of these parties have now merged to form the Rastriya Janata Party Nepal (RJPN).

The movement took a violent turn in the run-up to the promulgation of the new constitution that they claimed had failed to address all their concerns. India also expressed its displeasure over the constitution, which emboldened the agitators. As the protests got violent, so did government response, resulting in the deaths of scores of protestors. Citing security concerns, India sealed the border, disrupting the much-needed supplies of consumer goods. This came as a huge blow to the people still reeling from the havoc caused by the devastating earthquakes.

This movement failed miserably, or was abandoned before it ran its full course, because of the following reasons.

First, the protests began on a wrong foot. The constitutional process was getting worryingly long and people increasingly worried that even the second Constituent Assembly would fail. There was a widespread belief among hill people that outstanding Madhesi issues could be settled through the peaceful political process. Second, the protests came at a wrong time. Disruption of supplies from India added insult to injury, making lives of the people hit by the earthquakes even harder. As a result, the protests failed to garner the much needed public support and sympathy.

Most importantly, India changed its stand. The protests were organized largely with the belief that India would lend its support. Initially, India did, unofficially blocking the border even though the organizers falsely claimed credit for it. But, amid protests from Nepal, India’s posture became increasingly untenable, and it gradually backed off, leaving the Madhesi leadership directionless. The movement tapered off with none of its core demands met.

Among other things, the demands included creation of two provinces in the Tarai. Currently, there are three provinces in the Tarai, and two of them (Provinces 5 and 7) also include some hill districts. The two-province argument is based on the assertion that the majority there is Madhesi. But other groups such as the Muslims and the indigenous Tharus fear losing their distinct identity if subsumed under the broader category of ‘Madhesis’.

Second, they have called for a constitutional amendment that would recognize as citizens the children of Nepali women married to foreigners. Currently, such children are barred from Nepali citizenship unless their fathers are also naturalized citizens. The Madhesis say that they are disproportionally affected by this provision because of their cross-border marriage ties. But hill community fears that easing the process would open the floodgates to ‘foreign’ aspirants to Nepali citizenship and overwhelm the local populations.
The Madhesis have also demanded that electoral districts be based on population size rather than geography. But the people living in the mountain districts fear that they would lose a significant number of parliamentary seats if the regions were redistricted based solely on population.

After getting their fingers badly burnt during the protests, the Madhesis (except Upendra Yadav-led Federal Socialist Forum) were reluctant to go to the local polls because they knew they would (in retrospect they did) fare badly. Things fell apart and the center of the Madhes movement could not hold. While the RJP sought electoral alliances with political parties dominated by hill people, some of its prominent leaders parted ways to ironically join parties alleged to be against their own agenda. Even though the RJP is trying to woo voters with some outlandish promises, it is unlikely that the general elections will yield significantly different results.

Does this mean Madhesi leaders have lost the legitimacy to carry the Madhes agenda? If so, who is going to fill the void?

Even though Nepali Congress fared better in local elections, it is unlikely to be accepted as a pro-Madhes party. And the NC cannot ignore concerns of its hill constituencies, the majority of which is unsympathetic to thorny issues like citizenship and demarcation of provinces.

Such uncertain times might provide radical elements like Jay Krishna Goit and C K Raut, who have launched separatist movements, with new opportunities. They appear subdued now but they are likely to be active soon, on the pretext that mainstream Madhesi political forces have abandoned Madhesi issues. The extremists not only want the southern plains to be independent but also want to ‘reclaim’ it from the hill people. Goit’s Janatantrik Tarai Mukti Morcha and its smaller offshoots were responsible for violent attacks, mostly against the people of hill origin.

Raut leads a relatively peaceful but more vitriolic campaign. He has been spewing hatred against the Pahades (hill people) who he alleges are responsible for all ills in the Tarai. He is reported to have been providing Madhesi youths with paramilitary training, and the seemingly peaceful movement may turn violent at any time.

Some dismiss the prospect of successful separatist campaigns but one only needs to be reminded that even small groups can cause considerable violence. The Maoists were a small group, to begin with but grew into a formidable force within a few years.

Most importantly, India’s posture determines the trajectory of these radical campaigns. India is known to encourage such anti-establishment groups to put pressure on Nepali leadership that India deems ‘unfavorable’. India doesn’t want a communist party-led government in Nepal, as New Delhi believes that communists are more loyal to Beijing. Besides, K P Oli, the most likely new prime minister if the current communist alliance wins a majority, has a bad relation with Modi administration.

The path ahead is both difficult and uncertain. Common people are more concerned about issues that directly affect their daily lives. The southern plains have a better prospect of development than the hills but decades of corruption have been responsible for the sorry state of education, healthcare, physical infrastructure and employment there. Deprivation is a breeding ground for rebellion. Economic development not only improves living conditions but also provides the youth with better opportunities. This should be Nepal’s focus right now.

Cabinet declaring those killed during Madhes movement as martyrs today

KATHMANDU, Aug 5:  A Cabinet meeting on Friday is providing martyr status to those killed during the Madhes Movement, compensation to... Read More...

Nepal's politics is in a serious and sensitive situation: NCP General Secy Chand
50 minutes ago