At Badarmude, can Dahal win where families were lost? 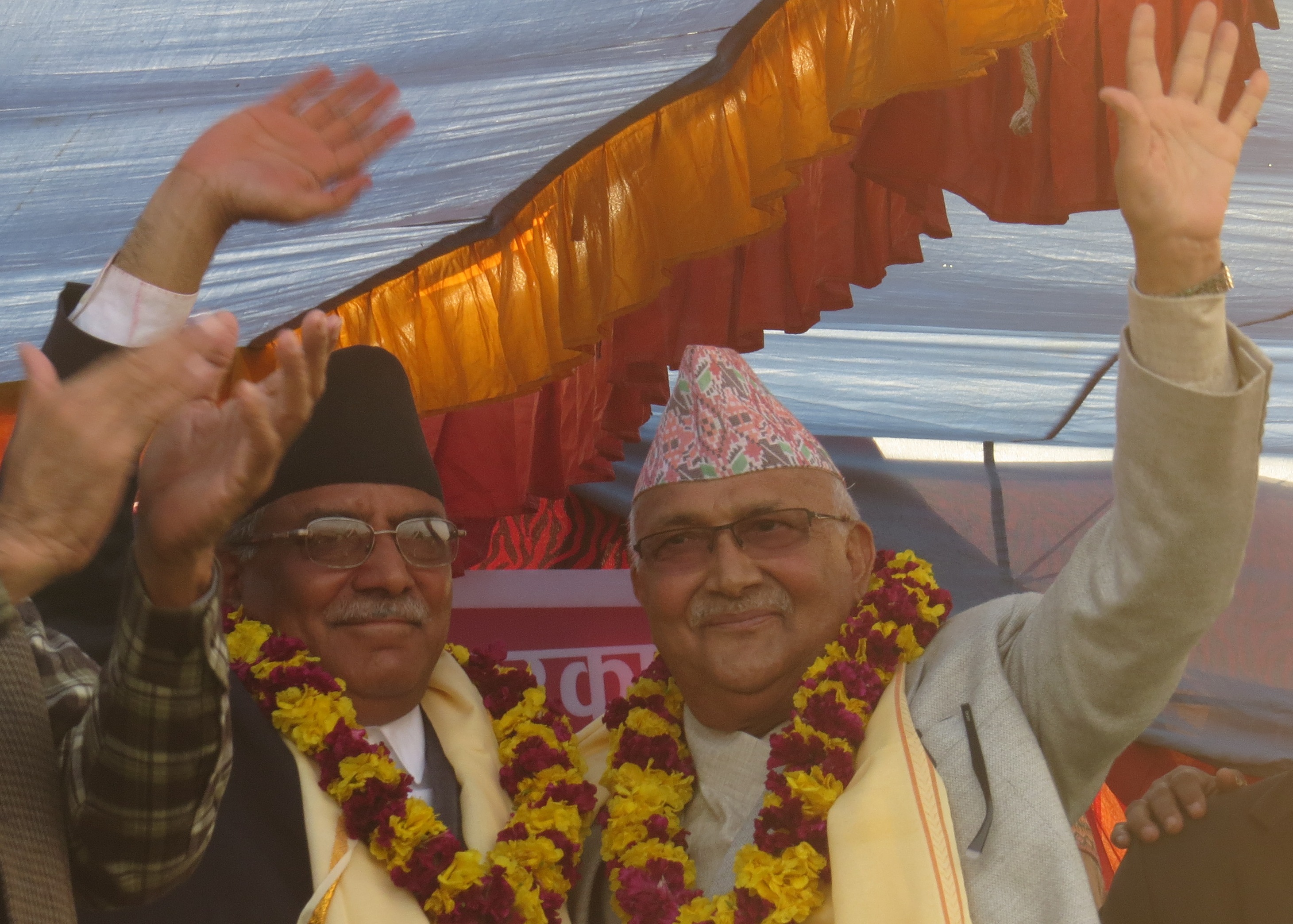 CHITWAN, Dec 4: On Sunday, leaders of the left alliance, Pushpa Kamal Dahal and KP Sharma Oli jointly addressed a mass gathering at Madi, Chitwan. Oli and Dahal embraced each other to express the alliance’s solidarity.

Unlike a tensed Dahal who addressed a mass gathering on November 2 at Bharatpur, this time, his face reflected some sort of satisfaction. Yesterday, Dahal recalled how he was suggested to avoid Chitwan for safety reasons and how everyone would come together to make sure he lost in the election. “But I have come here and it is up to you to help me win or lose.”

Everyone had speculated that Dahal’s win from Chitwan would be a herculean task. However, after the left alliance proposed Dahal as its candidate from constituency-3, Chitwan, rather than filing a candidate, the Nepali Congress supported RPP-Democratic candidate Bikram Pandey. In local level elections, Nepali Congress had helped CPN-Maoist (center) secure its win for the mayoral post.

Following the results of local level elections, Maoists and CPN-UML had conflicting relations and at Chitwan, the impact could be felt. When UML candidate was leading the vote counts for mayoral candidate of Bharatpur, the Maoists tore the ballot papers. It led to a re-voting where the Maoists won. The UML had accused Nepali Congress and Maoist (center) for meddling in the election by abusing their power.

Badarmude, where 38 people were killed after the Maoists bombed a passenger bus during the insurgency falls inside Dahal’s constituency. With families of the incident’s victims yet to get justice, Dahal had to fight a tough battle to win and solidarity for the Maoist was weak.

However, when on Sunday, Dahal’s seemed to settle past challenges.  To clear misunderstandings with the CPN-UML, Dahal said that the two merged not only for the elections, but also to unify the parties.

A day before filing nominations, the Maoist (center) and UML formed a joint alliance coordination committee at Chitwan. Following the decision, the committee expressed that even late Madan Bhandari had talked about a stronger left alliance. Following the election meddling, misunderstanding between Maoist and UML was clear.

However, Devi Gyawali, candidate for the mayoral post at Bharatpur in the local election supported Dahal and said that he had lagged behind in the vote count from the start.

But with the newly formed alliance, Oli accompanied Dahal twice to Bharatpur. Dahal reciprocated and traveled to Kathmandu to urge voters to vote for Madhav Kumar Nepal on Saturday.

For Dahal, there were no complications between the two parties. The Badarmude incident has been managed to some extent. Before addressing a mass gathering at Madi yesterday, Dahal reached out to families of those who killed in the incident and signed a three point agreement.

Immediately after the attack on the passenger bus on June 5, 2005, Dahal had called it ‘the biggest mistake of civil war’ and sought forgiveness. Dahal had traveled to Badarmude on November 4 and signed a 12 point agreement with promises to fulfill them with the area’s Victim Struggle Committee.

However, a favorable environment to actually sit together with the victims wasn’t ready.

Reaching an agreement with the ‘Struggle Committee’ itself became a struggle for Dahal. On Sunday, before speaking to the mass gathering, Dahal reached to the victim’s families and signed a three point agreement. Unlike the Struggle Committee’s stand of compensation, justice and punishment for the culprit in the agreement, the three point agreement focused on compensation and employment. The Committee condemned the agreement that was signed between Dahal and the victim’s family.

During his address to the mass gathering, Dahal recalled the incident with emotions that made him stop once in a while. “It was the biggest mistake of the civil war and after hearing about it, I could neither eat nor sleep,” Dahal said adding that he wanted to reach an agreement with the Struggle Committee. However, the incident has become a way for the struggle committee to politicize the event,” Dahal claimed.

With the newly formed agreement and his speech, Dahal is partly confident that the incident has been managed to some extent. It also has become a blow to Dahal’s rival, Pandey.

Dahal has also been able to weaken Pandey’s support. When Dahal went to Madi on December 5, he successfully invited Badri Timilsina, district chairman of RPP and into the left alliance. He also was able to bring member of Naya Shakti Party-Nepal’s secretariat, its proportional representative candidate, Dan Bahadur Tamang, both of whom had supported Pandey, into Maoist (center).  Tamang has strong hold in the area and the UML had batted him as a candidate in the Constituent Assembly election.

Yesterday, Chief Minister Ramesh Lama of RPP-Democratic turned against his party’s nomination Bikram Pandey and urged voters to vote for Dahal instead. While the incidents have somehow solved Dahal’s challenges, Pandey still is a tough fight for Dahal.

Pandey is a popular person. While RPP was unorganized, Pandey was in constant touch with the locals and voters proximity paid off. During the CA election, Pandey won from former Constituency-5.  After Dahal broke the local election alliance with Nepali Congress, voters are angry. For this reason, Pandey is sure to get votes from voters of Nepali Congress.

While Oli and Dahal embraced each other yesterday, will voters embrace Dahal as well? At Constituncy-3, there are 125,000 voters, and speculations are rife—who would turn out victorious?

Where have we lost the essence of being Nepali?

Few weeks ago, my friend and I were hungry after a whole day of travel around New Delhi. We agreed... Read More...