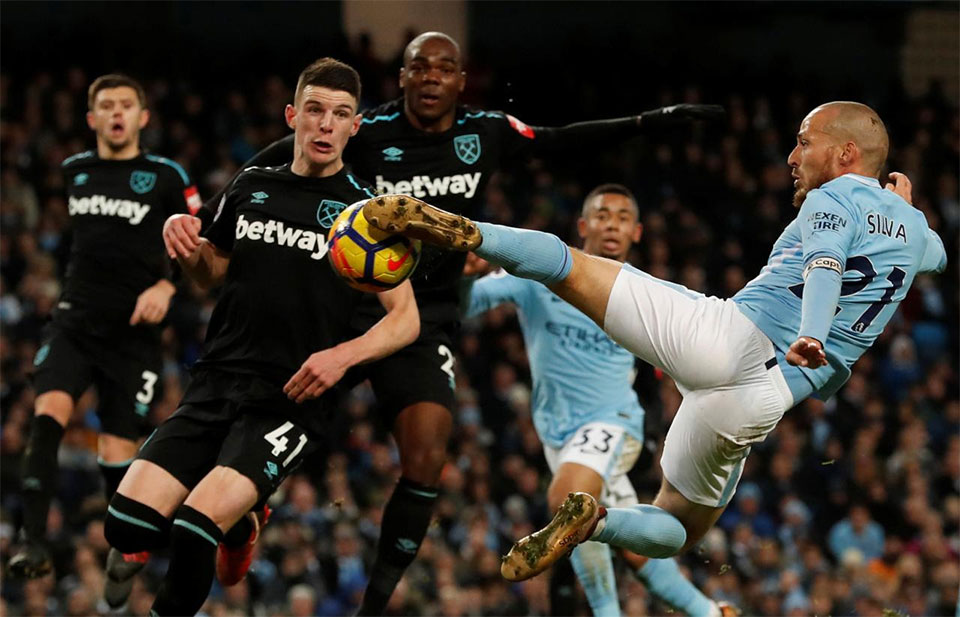 Nicolas Otamendi had converted substitute Gabriel Jesus’s cross in the 57th minute to equalise after defender Angelo Ogbonna had headed West Ham into the most unlikely lead at the end of a first half in which the hosts dominated.

In winning their 13th successive Premier League match, City equalled the record held by both Arsenal and Chelsea.

“It was difficult, teams seem to come here and get every man behind the ball, not interested in anything but parking the bus,” City midfielder Fabian Delph told Sky Sports.

”But we have players like David Silva in the team, so we knew if we kept going we’d get our chances. We knew we had to be patient, we came out flying in the second half, we tried to explain to the boys we still had time and then we started to relax a bit more and found those spaces.

“We want to win the derby but we are taking it each game at a time.”

After rivals United beat Arsenal 3-1 on Saturday to cut their lead to five points, City needed to win against relegation-threatened West Ham to restore their comfortable lead ahead of next weekend’s trip to Old Trafford.

As expected, City dominated possession but the mass ranks of West Ham defenders frustrated their array of attacking players and disrupted the rhythm of their intricate, threaded passes.

Surprisingly, it was West Ham who came closest to opening the scoring when Michail Antonio stretched to fire a close-range volley over the top.

Not until the 26th minute did goalkeeper Adrian make his first meaningful save, pushing Silva’s deflected shot over the crossbar.

Manuel Lanzini drew a save from Ederson 10 minutes later before out-of-sorts City failed to deal with a corner -- as they did in last weekend’s victory at Huddersfield Town -- with Ogbonna’s downward header evading Ederson.

Otamendi restored parity shortly after the break but, until Silva’s late intervention, it appeared that City’s search for a winner would prove fruitless.

Jesus, Leroy Sane, de Bruyne, Silva and Raheem Sterling all went close as the Hammers defended superbly in their most impressive performance under manager David Moyes.

City have not lost a game since April, and face second-place United next Sunday. West Ham, who have won only twice all season, sit 19th -- three points behind West Bromwich Albion in 17th.

KATHMANDU, July 25: Nepal’s preparations for the 18th Asian Games, which is just around the corner, are on a rapid track.... Read More...

WATFORD, Aug 12: Liverpool conceded in second-half injury time to draw 3-3 at Watford on Saturday as the team's defensive... Read More...

A crisis with a woman’s face
44 minutes ago