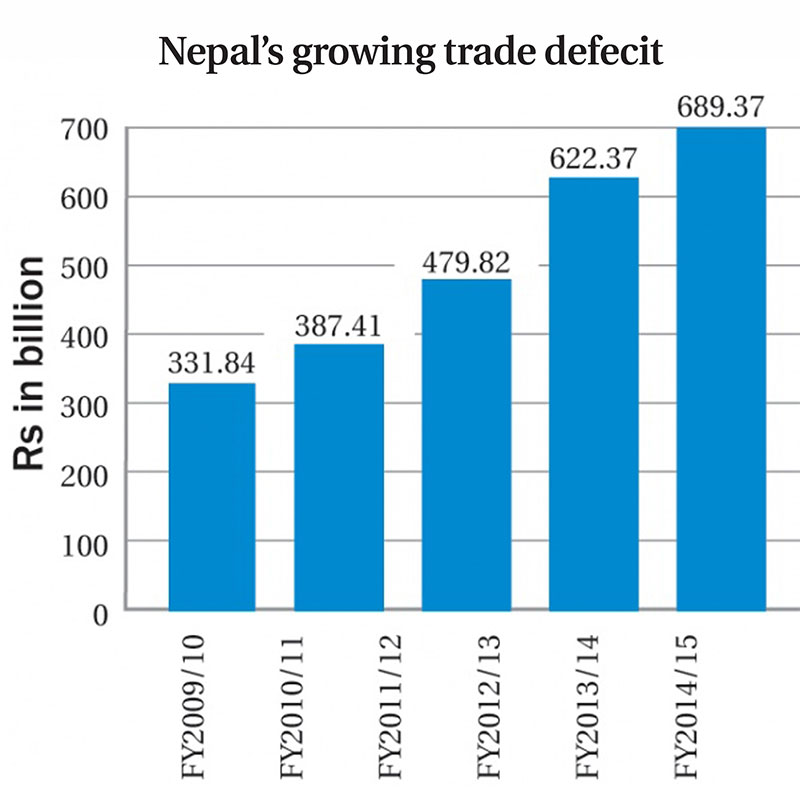 There should be a careful and dispassionate analysis of the economic costs of remittance
There is no paucity of positive appraisal of the contribution of remittance to Nepali economy. It has indeed contributed significantly to national income and to our foreign exchange reserves. Remittance makes for nearly a third of our GDP, and helps with our Balance of Payments.

However, remittance also has costs, which might badly harm the economy in the long run. The impact of remittance can be deleterious for the national economy in both medium and long terms. Remittance, among its other effects, can create inflationary pressure, invite sectoral bubbles, drive up consumption, push imports and cause a decline in labour market participation.

Gross National Disposable Income (personal income available for expenditure after deducting taxes and social security contribution) has steadily grown in Nepal in recent years. The Ministry of Finance has attributed the growth in disposable income to increased inflow of remittance.

Increased disposable income in turn increases people’s purchasing power as well as the demand for consumable goods. The ratio of Gross Consumption to GDP stood at a worrying 0.88 in FY 2014/15. Compared to FY 2006/2007, average Per Capita Consumption has shot up by 124.2 percent (Economic Survey 2015).

Consumer demand has increased along with the diversified consumption pattern, but the supply side shows no signs of coping with the increased demand. The challenge of investing a part of the remittance remains. With limited supply, the burgeoning consumption ultimately creates inflationary pressures and contributes to price increase.

Again, most of the incoming remittance is spent on daily consumables and luxury items. This is likely to further fuel consumption. The returning migrants have altered taste for imported consumer goods, and this new taste soon spreads to their families, neighbors, and the larger community.

Various microeconomic surveys have demonstrated that purchase of land, housing and other real assets are the most common use of remittance in Nepal. In a few instances, this has led to ballooning real estate prices. These sort of sectoral bubbles are unhealthy for the economy.

A flip side of remittance is decreasing labor market participation in home country. This has started to be conspicuous in Nepal in last few years.

Labor supply has diminished and wages have gone up. Basically, there can be two reasons for this gradual slump in labour market participation.

One: the labour slump is directly caused by remittance inflows. The receiving households prefer to live off remit transfers rather than work and engage in economic activities. In no other field is this shortage as acute as in agriculture, as is evident in the huge swathes of fallow lands in our villages. Two: with increasing exodus of people, quality manpower back home is in desperate short supply.

The trade-off of forgone labor appears in a 2011 Swiss Agency for Development and Cooperation report on Nepal. “The labor expended in the gulf (countries) and Malaysia is labor lost to Nepal and the development of its own economy.” The inflow of hard-earned Riyals and Ringgits can barely compensate for this loss. The opportunity cost of labor migration is indeed colossal to Nepali economy.

A shortage of labor has reduced agricultural production and increased the cost of production in other sectors. The demand for durables and luxury goods induced by remittance has also pushed up imports as most such goods are not produced in Nepal. The ratio of exportable goods and services to GDP has been decreasing every year. Thus, again, remittance inflow has resulted in more imports and hence more outflow of money from Nepal.

Remittance also contributes to dependency. Though only a neo-Luddite would want total independence of his country in economic affairs in this day and age, we must also acknowledge that increased dependency injects innumerable fragilities in the economy. Remittances are volatile and economies depending on these inflows are vulnerable to external shocks. If the flow gets disrupted for some reason the direct effect would be felt by the remittance-receiving economy. This is what happened with the remittance-receiving Jordan, Sudan, and Yemen during the Gulf war. Even Nepal has witnessed a significant return of emigrants in the wake of the recent crises in Libya and Syria.

The countries most preferred by Nepali migrant workers in the Gulf have many political and economic fault-lines. Any disruption of that fragile equilibrium would cause havoc in the Nepali economy. The global slump in fuel prices has boosted recessionary forces in countries in Persian Gulf whose economies are fuelled by petroleum exports. With their intake of workers declining, the spillover is already felt in Nepal.

This bleak side of remittance must be considered for the health of Nepali economy. However, an absolute disdain of remittance and labor migration would also hamper national income and Balance of Payment. The problems associated with remittance cannot be undone through an abrupt halt of labour migration.

There should rather be a careful and dispassionate analysis of economic costs of remittance and economic malaise induced by high remittance inflow. A scrutiny of this dark side of remittance is important if Nepal is not to be caught surprised by one of the problems associated with remittance ballooning out of control.

The author is a section officer at the Ministry of Foreign Affairs. The views are personal.