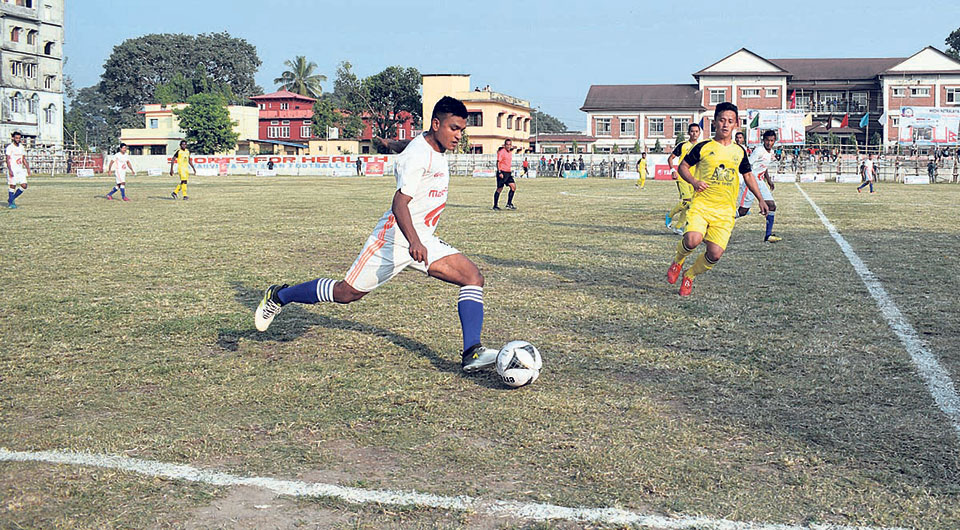 Player of Armed Police Force (white) and Rupandehi XI in action during a quarterfinal match of the Kakarbhitta Gold Cup Football Tournament in Kakarbhitta on Thursday.

Rajin Dhimal, Cedric Aba and Dipak Rai netted one goal each for Rupandehi, while Sudip Sikhakar replied for the departmental side in the match played in Kakarbhitta School’s ground.

Rupandehi will now face Manang Marshyangdi Club (MMC) in the last eight encounters on Saturday. MMC will be coming as Satashi Gold Cup runner-up into the tournament.

Dhimal put Rupandehi in the driving seat by scoring an opener in the 14th minute. Fullback Dhimal’s 25-yard shot was converted into the first goal after Raju Nagarkoti failed to grab it.

African recruit Cedric Aba doubled the tally in the 18th minute utilizing a pass from Dipak Rai.
Sudip Sikhakar tried to bring his team back in the game by scoring in the 60th minute. Sikhakar scored a brilliant header utilizing a cross from skipper Milan Rai.

Rupandehi sealed the victory in the 80th minute with Dipak Rai’s striking his team’s third goal.
Despite the win over the departmental side APF, Rupandehi’s head coach Dayaram Sapkota wasn’t completely happy with the performance of his players.

“We should have scored more goals given the chances we created. Players were over-confident. We missed our strikers Amar Dangol and Niraj Basnet. Their presence could have helped us to get more goals,” head coach Sapkota said. He also praised APF’s performance. “APF is a good team with quality players and it wasn’t an easy task to outclass it,” he added.

APF’s head coach Ratna Kaji Maharjan said that the injury to his key players including Anjan Bista and Aditya Chaudhary was strong reason behind the defeat. “Absence of Anjan and Aditya was felt since they are very important for us. Today we couldn’t capitalize the chances. After conceding two goals within a space of three minutes, players’ confidence eroded,” said Maharjan.