All eyes on the 'Crocodile' as Zimbabwe's Mugabe resigns 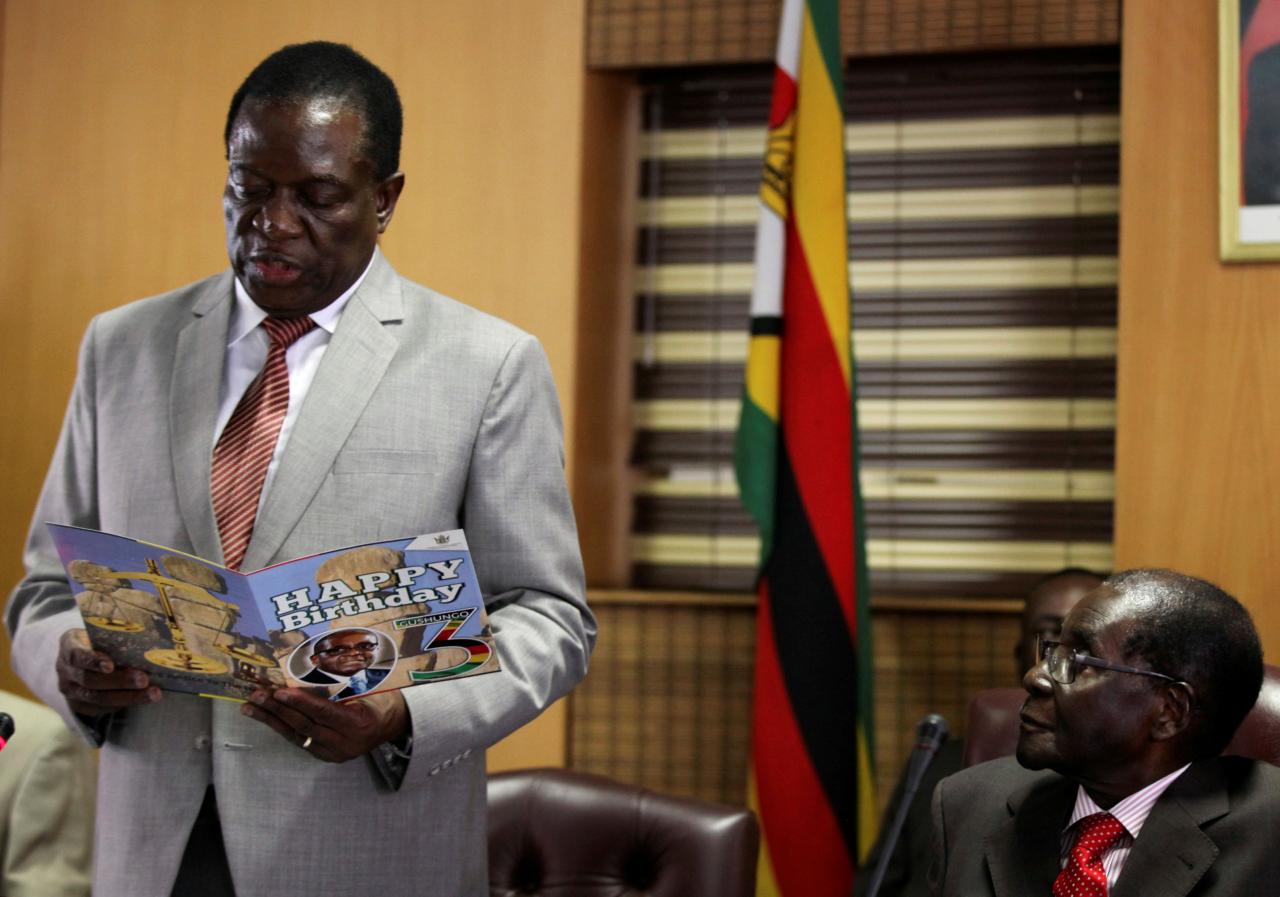 The man who stood to gain most from the dismissal betrayed nothing through his expression and gentle clapping - a survival tactic honed during five decades of service to the mercurial Mugabe. His cap, however, spoke volumes.

Emblazoned across its front, next to a portrait of Mugabe, were four words: “Indigenise, Empower, Develop, Employ” - a slogan of the ruling ZANU-PF party. That day, he became Mugabe’s official deputy.

Mnangagwa, whose sacking from the post this month brought Zimbabwe’s political crisis to a head, is now poised to take over after Mugabe, 93, resigned on Tuesday, ending almost four decades of rule.

Mnangagwa will be sworn in on Wednesday or Thursday, ZANU-PF’s legal secretary Patrick Chinamasa told Reuters. The party’s chief whip said Mnangagwa would serve the remainder of Mugabe’s term until the next election due by September 2018.

But there are questions over how Mnangagwa will lead the country led by Mugabe since independence in 1980.

In a statement issued from hiding on Tuesday, Mnangagwa said Zimbabweans from all walks of life had to work together to rebuild a shattered economy and deeply polarized society.

“My desire is to join all Zimbabweans in a new era, where corruption, incompetence, dereliction of duty and laziness, social and cultural decadence is not tolerated,” he said.

“In that new Zimbabwe, it is important for everyone to join hands so that we rebuild this nation to its full glory. This is not a job for ZANU-PF alone but for all people of Zimbabwe.”

The 75-year-old was one of Mugabe’s most trusted lieutenants, having been at his side in prison, during wartime and then in government. With his appointment in 2014 as Mugabe’s official deputy, Mnangagwa had appeared well set as the eventual successor to Africa’s oldest head of state.

“There are no arguments around his credentials to provide strong leadership and stability, but there are questions over whether he can also be a democrat,” said Eldred Masunungure, a political science lecturer at the University of Zimbabwe.

Speaking at the congress in 2014, Mnangagwa reinforced the message emblazoned on his headgear, announcing revisions to ZANU-PF’s constitution that backed “total ownership and control” of Zimbabwe’s natural resources.

It was a key insight to the party’s direction as it contemplated life beyond Mugabe.

“We will remain forever masters of our own destiny,” Mnangagwa said at the time, to cheers from the crowd.

Along the way, Mnangagwa earned the nickname “Ngwena”, Shona for crocodile, an animal famed in Zimbabwean lore for its stealth and ruthlessness.

He backed Mugabe’s economic nationalism, especially a drive to force foreign firms to hand majority stakes to local blacks, suggesting he may not be the pro-market pragmatist many investors were hoping for.

He has been in every administration since independence, holding posts as varied as minister of state security, defense and finance, as well as speaker of parliament.

Most controversially, he was in charge of internal security in the mid-1980s when Mugabe deployed a crack North Korean-trained brigade against rebels loyal to his rival Joshua Nkomo.

Rights groups say 20,000 civilians, mostly from the Ndebele tribe, were killed. Mugabe denies genocide or crimes against humanity but has admitted it was a “moment of madness”.

Mnangagwa’s role remains shrouded in mystery, typical of a political operator trained as a communist guerrilla in China in the 1960s and who always stayed in the shadows behind Mugabe.

Secretive and insular, he prefers to operate under the radar, those in his inner circle say, and when pushed into a corner, resorts to jokes and trivia to avoid serious discussion.

“I wouldn’t say he is deceptive but it’s fair to say his default position is to crack jokes and deflect uncomfortable questions by asking endless questions,” one member of parliament close to him said.

“He is very conscious that his public image is that of a hard man but he is a much more complex personality - pleasant and an amazing story-teller,” the politician, also from Mnangagwa’s Midlands Province, told Reuters.

Mnangagwa’s appointment as vice president came a day after his predecessor Joice Mujuru was fired for allegedly planning to topple Mugabe.

Asked whether the purge would weaken the party, a smiling Mnangagwa said: “The revolution has a way of strengthening itself. It goes through cycles, this is another cycle where it rids itself of elements that had now become inconsistent with the correct line.”

Mnangagwa learnt his politics in prison in the 1960s after being sentenced to death for sabotage by British authorities. He was captured while in one of the earliest guerrilla units fighting white colonial rule in what was then Rhodesia.

He was 19 and only spared the noose by a law prohibiting the execution of convicts under 21.

After a decade in prison, often sharing a cell with Mugabe, Mnangagwa became personal assistant to the leader of the liberation struggle, and went on to head the guerrilla movement’s feared internal security bureau.

In January, a photograph appeared in local media showing Mnangagwa enjoying drinks with a friend. In his hand was a large novelty mug emblazoned with the words: “I‘M THE BOSS.”

To supporters of Mugabe, this bordered on treason. They suspected that Mnangagwa already saw himself in the leader’s shoes.

When Mugabe fired Mnangagwa as vice president this month for showing “traits of disloyalty”, he removed a possible successor who was also one of his last remaining liberation war comrades.

But relations had already cooled between the two men after suggestions by Mnangagwa’s allies in August that he had been poisoned by ice cream from a dairy owned by the Mugabes.

HARARE, Nov 19: The leaders of Zimbabwe’s ruling ZANU-PF party will meet on Sunday to approve the dismissal of President Robert... Read More...