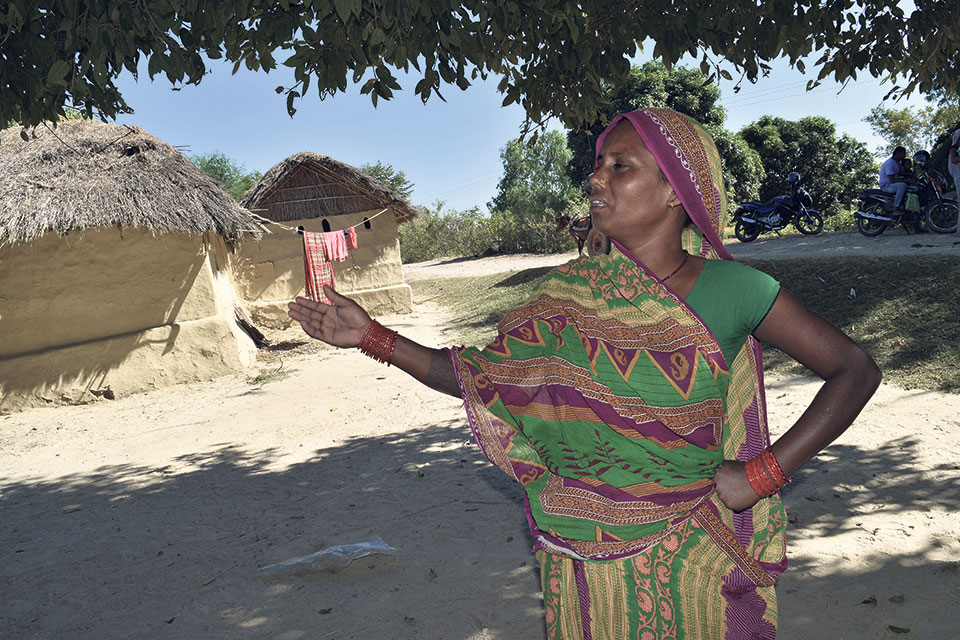 Bajun Devi Malik of Dom community of Bhagwanpur Rural Municipality-3, in Siraha district says she is not interested in elections.

'Election is for the rich people, not for us'

SIRAHA, Nov 21: In the northern side of the Postal Highway in Bhagwanpur Rural Municipality-3, seven Malik (Dom) families have been living miserable lives in thatched houses. Though the excitement of election has absorbed the locals across the country, this community is untouched by the election fervor.

Raising pigs and selling bamboo products are the only source of income for this community. They have been living in unregistered land for decades and in the name of infrastructure, all they have is a tube well. Locals here are forced to rely on contaminated water, which often leads to various kinds of health hazards.

Raised in poverty, these people could never receive the privileges and facilities like other people. Their votes often played a vital role in changing the fate of leaders and politicians. However, their own lives remain miserable. While people living in other communities are busy attending mass gatherings of political parties, none of the locals of this community seem interested in such activities.

"Election is for the rich people, not for us," said Bajun Devi Malik, adding, "We have just been vote banks for the leaders and we will continue to be until our economic status rises." According to her, leaders make lofty promises to them to seek their votes but never deliver them. "They even threaten us to vote. Unfortunately, none of us can dare to raise voice against them as we have been living in unregistered land," she laments.

She informed that the candidates of local elections who visited their homes and vowed to change their lives didn't show up then after. None of the candidates have visited this community for the upcoming parliamentary and provincial polls.

Bajun Devi cast her vote in the local election as she was told that they won't have to struggle for the registration of birth, death, marriage and for other government documents. "They worked hard in elections not for us but for their position. Now that they have got their post, they have forgotten us," she said.

She often visits the Rural Municipality Office to meet the representatives but always has to return home without meeting them. "It has been more than a month that I have been making rounds of their office for the recommendation of my son's citizenship but they are never available," she laments. Her son, who wishes to go abroad for employment, has not been able to forward the process as he lacks the necessary documents which require the recommendation of the ward chief.

As informed by Pashupati Yadav, one of the locals of Bhagwanpur Rural Municipality, the Malik community is tired of the false promises and assurances of leaders and candidates which is the reason why they are not interested in elections. Being fed up with the deception of the candidates, the locals of this community have unanimously decided not to vote for the candidates who have not addressed or mentioned their issues in their agendas.

MYAGDI, Nov 15:  Since the last two years, Om Kumari Lamichhane of Katuwachaupari of Parbat has been living at an old-age... Read More...

Federal Democratic Republic came through the sacrifices of martyrs: PM Dahal
53 minutes ago