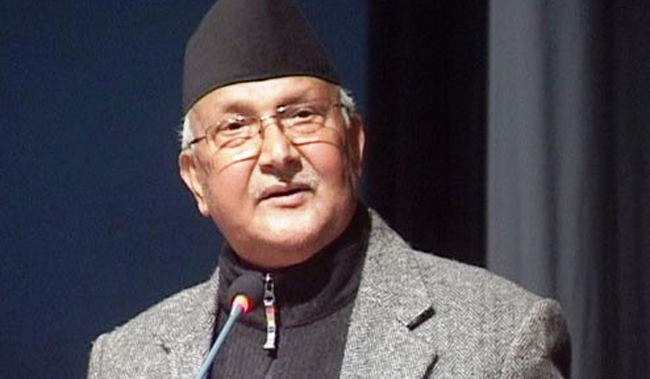 Speaking at an economic debate hosted by the Federation of Nepalese Chambers of Commerce and Industry (FNCCI), Oli criticized the decision to first provide license to Gezhouba Group and later scrap it on the eve of election. “

"This government is going to remain in place for only one more month and its mandate is to hold elections. It made the decision to first award the project and later scrap the contra”t," said Oli who is also a former Prime Minister“. "The next government will correct any unauthorized decision taken by this government," he added.

The announcement to rollback the decision comes after a week of the incumbent government's decision to scrap the license awarded to the Chinese company to build the 1,200-megawatt project.

The announcement of the chairman of CPN-UML, which has formed electoral alliance with the CPN (Maoist-Center) as well as plans to unify the party, has made the fate of the mega hydropower project more uncertain. “

"Whether the Chinese company is good or bad or whether the due process was followed while awarding the contract is a separate matter for debate. The decision to first award and later scrap the contract does not bode well for the count”y," Oli added.

Speaking at the program, CPN (Maoist-Center) leader Krishna Bahadur Mahara tried to allay fears of business leaders who seemed to be fearful about the 'left alliance“.

"Questions have been raised about the fate of democracy following the electoral alliance.

However, I would like to assure you that the alliance will move ahead in line with spirit and letters of the new constitution which envisions socialism-oriented economy," Mahara, who is also a deputy prime minister, said.“

"The private sector should not be worried that it will have to face restriction if the left alliance comes to the power. Instead, we will give protection to the private sector and foster healthy competition," he added.

"Unnecessary negative rumors have been spread about the country's economic condition should the communist alliance comes to the pow”r," Oli said“. "However, we have clearly said that cooperatives, private sector and the government are the three pillars of economy. While cooperatives will mobilize small scattered capital, the private sector will be encouraged for bigger investment," added Oli.

Also speaking at the program, Nepali Congress leader Ram Sharan Mahat said that his party will create an environment conducive for investment -- a prerequisite for rapid economic growth in the country.“

"To achieve the ambitious growth that we have promised, the main source of capital is the private sector. However, investment from the private sector is not going to increase until there is reform, political stability, meritocracy and prioritization of economic agenda," Mahat, who is also a former Finance Minister, said.

These leaders also defended the 'lofty promises' made in their election manifestos.

KATHMANDU, July 3: The Agriculture and Water Resources Committee (AWRC) of parliament has started discussion on the government's controversial decision to... Read More...