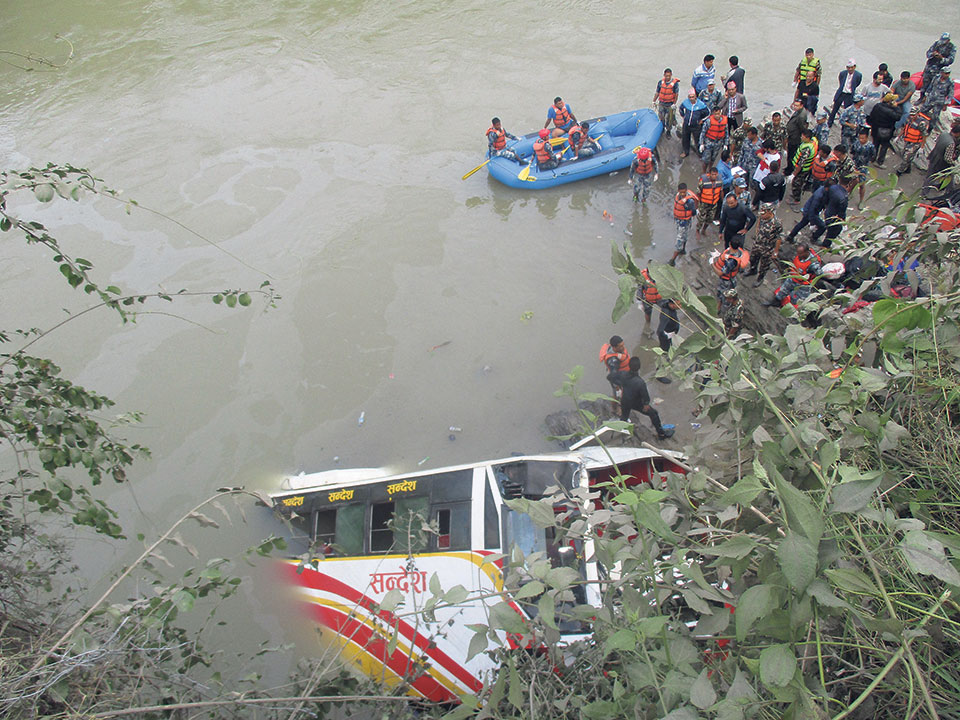 DHADING, Oct 29: At least 31 passengers were killed and scores sustained injuries when a bus plunged into the Trishuli River in a fatal road mishap that took place in Dhading district on Saturday morning at around 6 am.

The ill-fated bus (Na 6 Kha 1467) was en route to Kathmandu from Rajbiraj of Saptari when it skidded off the road and plunged into the river at Bangemode, Gajuri Rural Municipality-5 of Dhading.

Eleven men, nine women, six boys and five girls are among the deceased. As of Saturday evening, the identity of only 24 of the deceased could be established, informed Superintendent of Police (SP) Dhurba Raj Raut of District Police Office, Dhading.

A police team led by Police Inspector Barun Singh of Gajuri immediately rushed to the incident site after receiving the news of the accident. Along with the police personnel, other agencies including Armed Police Force and Nepal Red Cross were involved in the rescue operation. Their timely help saves many injured passengers.

“The survivors were screaming for help when we reached the accident site. Passengers have scattered around. Few persons were swimming and we promptly started our rescue operation,” said Inspector Singh.

The team of rescuers promptly rescued more than 16 people from the accident site and took them to the nearby hospital. According to Area Police Office, Gajuri, 14 among those injured are undergoing treatment at Gajuri Hospital while two others have been hospitalized at the Trauma Center in Kathmandu.

One of the survivors, Gaurishankar of Bihar in India, said she was fast asleep when the bus plunged into the river. “The morning had just started and the bus was moving in a very fast speed. The bus was in the river before I could think what happened. I screamed for help but nobody heard me,” she said, adding that she managed to swim ashore luckily.

However, her maternal grandmother, an uncle and his son, who were traveling with her, were not lucky. They make up the total death toll of this road mishap.

This fatal accident has once again brought to the fore the issue of safety of passengers traveling via the roads of the country. Overloading, over speeding, driver's negligence and poor road conditions all contribute to road mishaps that claim the lives of hundreds of people each year in Nepal.

PALPA, June 1: Fourteen people died when a passenger bus met with an accident at Humin of Rambha Rural Municipality in... Read More...

DHADING, March 28: At least four people have died and over 25 others sustained injuries in a bus accident at... Read More...