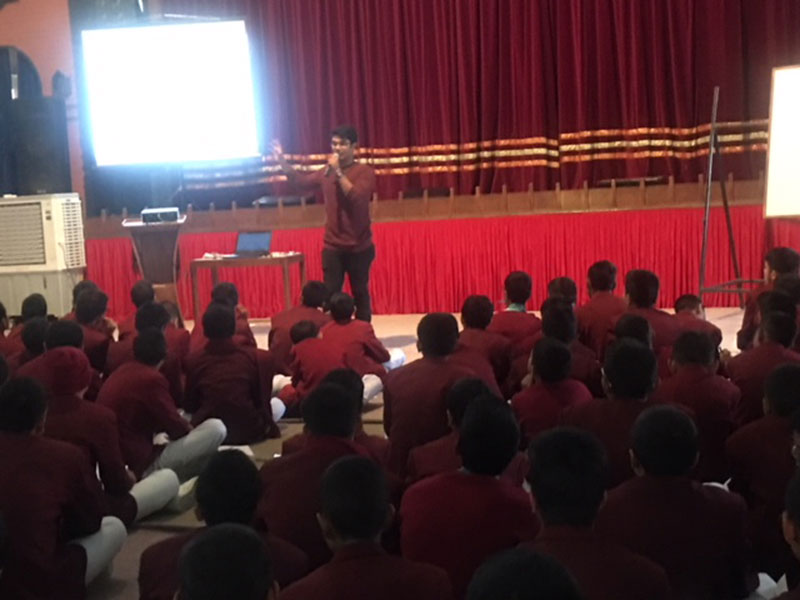 Regional Director of Brainwaves for India Mayank Gupta and Regional Director for Nepal Renish Rauniyar taught students how to make robots to introduce them to the world of science and technology.

Divided into various groups, over 300 students were engaged in making robots by using given devices, wire and other equipments.

Their happiness knew no bounds when their robots started functioning on its own.

Nibha Pradhan, an eighth grader, shared that it was a great fun to take part in an interactive and practical class. “Teachers had taught us about robots in the classroom. But I understood which part of the robot functions what only after Mayank sir demonstrated in the class practically,” Pradhan said.

Pradhan further said that she learnt how to make and operate robots. “Robots have brain as we do. Only the  differences between human brain and that of robots’ is that it is controlled by a micro remote.”

Jiya Ballav shared, “Were were excited to take a class on robots in a practical and interactive way.”

Eighth grader Nabodit Regmi said that he clearly understood what the robot is and how it functions after taking a class given by robot experts.

Sharing his experiences, Regional Direcotor Mayank said that students in Asia are lagging far behind in the sector of science and technology simply because they are taught confined to the four walls of a class room.

Similarly, Regional Director Renish stressed that the students should be taught practically rather than theoretically so as to bring out their potential.

Indu Sharma, a teacher of Little Angels, underlined the need to hold workshops in every school to inculcate practical knowledge in the students.

Siksha Sharma, a teacher of Social Studies, said the students were excited to have leant practical knowledge on how to make robots, how it functions and what equipments are required to operate it.

The Little Angels’ Model United Nations (LAMUN) is being held from Wednesday and it is organized by the students. ... Read More...