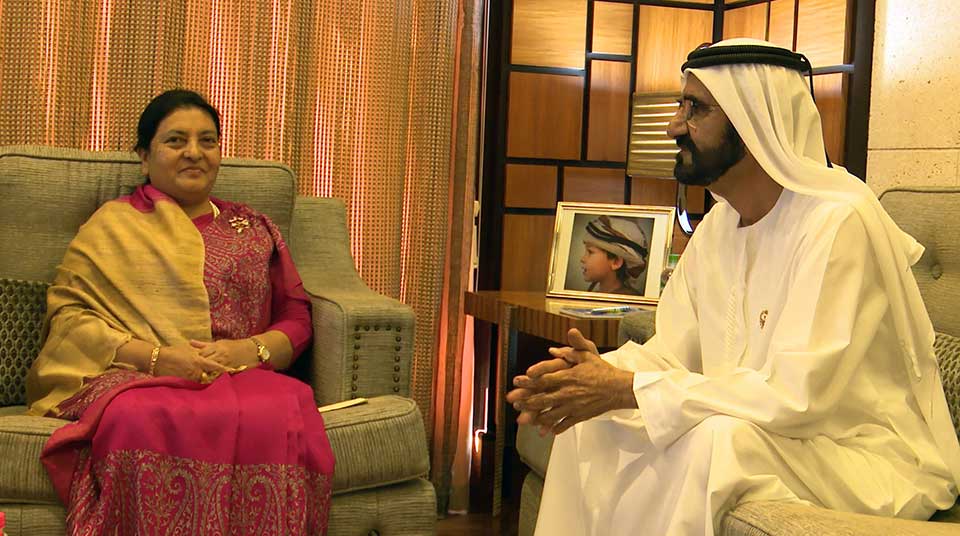 Abu Dhabi, Nov 16: President Bidya Devi Bhandari has said that the goal of her visit to the United Arab Emirates is to further consolidate the bilateral relations and take it to a new high.

She also underlined that her visit would help make the economic and social ties between the peoples of the two countries stronger.

Head of the State, Bhandari stated that another objective of her visit was to assure the Nepalis living and working in the UAE that the country was heading towards peace and stability, and an environment was created in which they could work remaining within the country itself.

President Bhandari made these observations while addressing a dinner reception hosted in her honour by the Embassy of Nepal here on Wednesday evening. Nepalis working and residing in UAE also attended the dinner.

She said that she came on this visit on the occasion of the 40th anniversary of the establishment of diplomatic relations between the two countries even during the busy time in the run up to the House of Representatives and State Assembly elections in Nepal.

The President said more than 200 thousand Nepalis who are working in the UAE and supporting the government and the Nepali people were the goodwill and honorary ambassadors of Nepal. She added that their work, duty and behaviour could contribute further towards enhancing the bilateral ties between Nepal and the UAE.

"The skills they learn and the money they earn here could be better utilized in Nepal," she said.

Stating that a Nepali man who was working here although committed a mistake inadvertently, it was not the kind of mistake that could not be forgiven, the President said, adding that during her meetings with the crown prince and deputy head of state of Abu Dhabi, the prime minister and the governor of Dubai she urged them to forgive and release him. The President was speaking in reference to the case of one Amar Bahadur Bam who has been jailed for long in the UAE for some offence.

The President also maintained that labour agreement has been signed between Nepal and the UAE, so the problem related to the domestic workers should also be addressed.

Noting that she has visited the UAE for the first time as the President of Nepal, she said discussions were held with the highest level here on the problems the Nepali community in UAE has been raising time and again and the government too had felt. The President said she felt her visit to the UAE has been successful and fruitful to that regard.

Minister for Supplies Jayant Chand, who is accompanying the President on the visit, said the Nepalis working in foreign land were making a great deal of contribution to supporting their families and also propping up the country's economy.

He said during the talks with the Abu Dhabi Crown Prince, UAE deputy head of state, the prime minister, the Dubai governor and the UAE speaker discussions were held on expanding cooperation for the development of water resources, agriculture, tourism and infrastructures in Nepal and further expanding the relations between the two countries at the people's level.

The Minister said stability would be achieved in Nepal with the implementation of the federal setup as envisioned in the constitution which would open wide the gate of economic development.

Charge d' Affaires of Nepal to the UAE, Netra Bahadur Tandon, welcoming the President and the Nepali community at the reception, said he had raised the issue of the problem Nepali migrant workers are facing in the UAE in his meetings with the UAE government and leadership level many times, and was making efforts for resolving the problem.

Ambassador of the UAE to Nepal, Saeed Hamdan al-Naqvi was also present at the programme.