Are our highways deathtraps? 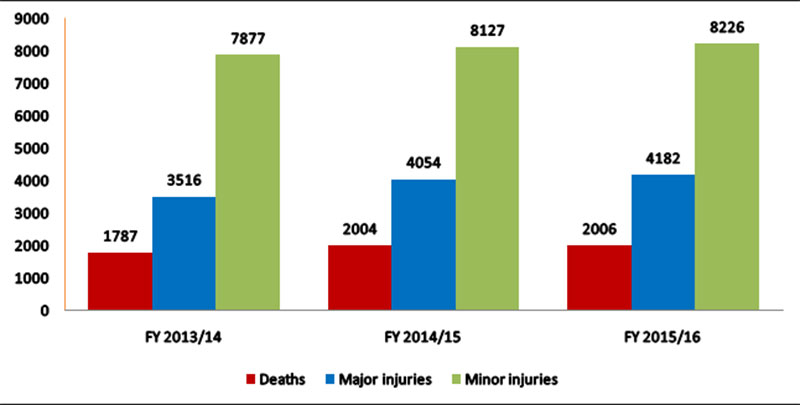 KATHMANDU, Aug 1: The alarming increase in the frequency of accidents on the highways in recent years shows just how unsafe our roads are.

Nepal Police data shows that a lot of people are losing their lives in road accidents.

Nearly 78 people were killed while more than 200 others were severely injured in road accidents in the past 15 days alone, according to police data. The number of minor injuries was over 280. A total of 592 accidents were recorded by police over the period.

Among the various reasons for road fatalities, drink-driving is very prominent. Out of 592 accidents, 273 were caused by driver negligence and 73 occurred due to over-speeding.

The various reasons for road fatalities include driver negligence, over-speeding, overtaking, drink-driving, technical problems in the vehicles, overloading and obstruction by animals, said spokesperson for Nepal Police, DIG Madhav Prasad Joshi. The sorry state of the roads is also blamed.

The government has identified the major problems, risks and challenges related to road safety in its "Nepal Road Safety Action Plan 2013-2020" introduced by the Department of Roads (DoR). The number of accidents and the death toll, however, have remained unchanged even after the action plan came into effect.

"Instead of pointing fingers at each other, the major stakeholders including DoR, Nepal Police and transport associations should work collectively to minimize accidents," Joshi said. One of the major causes of accidents is the failure of drivers to abide by traffic rules, such as violation of speed limits or overtaking other vehicles at random, he said.

There were a total of 8,406 road accidents in fiscal year 2013/2014, while the figures for 2014/15 and 2015/16 are 9,145 and 10,013 respectively, according to data maintained by Nepal Police. These figures, however, are thought to be lower than the actual number of incidents. A Status Paper on Road Safety in Nepal states, "Because of absence of dedicated lead agency for road safety, the accident data base system is poor in the country."

Road traffic injuries cause considerable economic losses to the victims, their families, and to the nation as a whole, according to the World Health Organization. These losses arise from the cost of treatment (including rehabilitation and incident investigation) as well as reduced/lost productivity for those killed or disabled by their injuries, and for family members who need to take time off work (or school) to care for the injured, WHO states.

Are we becoming slaves to our inbox, both at work and at home?

As we are bombarded with emails each day, we can’t stop ourselves from constantly scrolling our phone, or get perked... Read More...

KATHMANDU, July 2: Two students were killed and 17 others injured when  a compound wall caved in at Pushpanjali Secondary School... Read More...