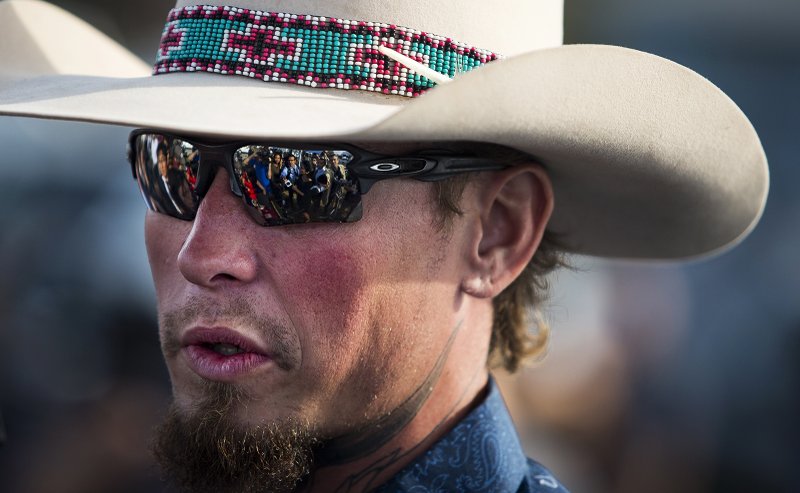 SUTHERLAND SPRINGS, TEXAS, Nov 7: A former National Rifle Association instructor who grabbed his rifle and ran barefoot across the street to open fire on the gunman who slaughtered 26 people at a small-town Texas church was hailed as a hero Monday, along with the pickup truck driver who helped chase the killer down.

Stephen Willeford, 55, said he was at his Sutherland Springs home Sunday when his daughter alerted him that she’d heard gunfire at the First Baptist Church nearby. Willeford said he immediately retrieved his rifle from his weapon safe.

“I kept hearing the shots, one after another, very rapid shots — just ‘Pop! Pop! Pop! Pop!’ — and I knew every one of those shots represented someone, that it was aimed at someone, that they weren’t just random shots,” Willeford said Monday during an interview with television stations KHBS/KHOG in Fort Smith and Fayetteville, Arkansas.

Willeford said he loaded his magazine and ran barefoot across the street to the church where he saw gunman Devin Patrick Kelley, 26, and exchanged gunfire.

“He saw me and I saw him,” Willeford said. “I was standing behind a pickup truck for cover. I know I hit him. He got into his vehicle, and he fired another couple rounds through his side window. When the window dropped, I fired another round at him again.”

As Kelley sped away, Willeford said he ran to a pickup truck stopped an intersection and told the driver, “That guy just shot up the Baptist church. We need to stop him.”

The driver, Johnnie Langendorff, said he had been driving to Sutherland Springs on Sunday to pick up his girlfriend when a man who’d been exchanging gunfire with Kelley suddenly landed inside his truck.

“He jumped in my truck and said, ‘He just shot up the church, we need to go get him.’ And I said, ‘Let’s go,’” Langendorff, a 27-year-old Seguin resident, told The Associated Press on Monday, adding that the ensuing pursuit eventually clocked speeds upwards of 90 mph.

Willeford said he and Langendorrf kept a 911 operator advised as the high-speed pursuit continued. He said Kelley ultimately hit a road sign and flipped his vehicle into a roadside ditch.

Langendorff said police arrived about five minutes later. Based on evidence at the scene, investigators believe Kelley died of a self-inflicted gunshot wound.

“There was no thinking about it,” Langendorff said. “There was just doing. That was the key to all this. Act now. Ask questions later.”

Asked if he felt like a hero, Langendorff said: “I don’t really know how I feel. I just hope that the families and people affected by this can sleep easier knowing that this man is not breathing anymore and not able to hurt anyone else. I feel I just did what was right.”

Though he did not identify Willeford by name, Texas Department of Public Safety Regional Director Freeman Martin said at a news conference Monday that the armed resident who confronted Kelley was toting an “AR assault rifle and engaged” the shooter.

Martin later praised Willeford and Langendorff: “The number one goal of law enforcement is to neutralize the shooter. In this situation, we had two good Samaritans who did that for law enforcement.”

Julius Kepper, Willeford’s next-door neighbor for the past seven years, described Willeford as a gun and motorcycle enthusiast who regularly takes target practice at property out in the country, and has as many as five Harley Davidson motorcycles.

Kepper and other neighbors said Willeford’s family has been in the Sutherland Springs area for at least three generations, including a father and grandfather who were in dairy farming. Stephen Willeford is married with two grown children and works as a plumber who installs lines on major projects such as hospitals, Kepper said.

He called Willeford a “free spirit” sort who loves motorcycles despite losing both parents to a motorcycle crash when he was a young adult. “It was almost the same spot where they ran (the shooter) off the road,” Kepper said.

Kepper said he’s not surprised Willeford would exchange gunfire with the church gunman. Others in the neighborhood would have done the same if they knew what was happening, he said.

“Just like everybody else around here. He was just the first one there,” Kepper said.

Republican Sen. Ted Cruz on Monday praised Willeford’s actions, after talking to law enforcement officials and visiting the church in Sutherland Springs. He lauded the “ordinary citizen” who engaged the gunman.

“I didn’t want this and I want the focus to be on my friends,” Willeford told The Dallas Morning News for a story published Monday that also confirmed he was the first person to confront Kelley. “I have friends in that church. I was terrified while this was going on.”

No one answered the door at the Willeford residence Monday. Food that had been delivered to the house was stacked up on the front porch.

Pedestrian knocked down by truck

CHITWAN, Dec 5: A 50-year-old man has been struck down by a truck at Jaya Mangala in Chitwan district today... Read More...