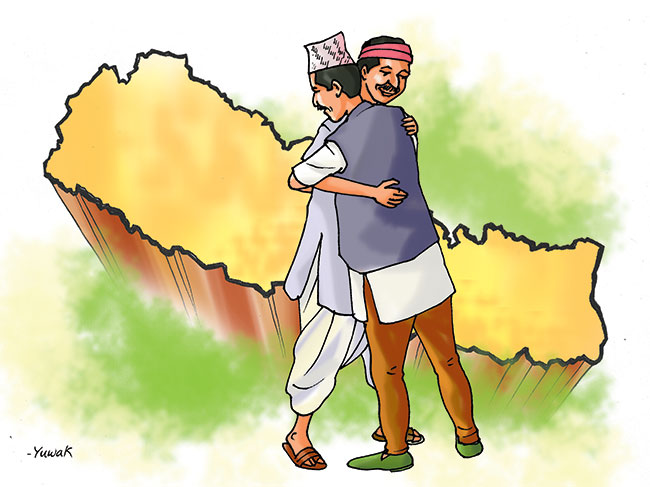 Madhesi scholars like to play up ‘affluent hills’ vs ‘oppressed Madhes’ narrative. But they don’t acknowledge suffering of hill folks

In response to one of my essays where I had highlighted indispensability of hill-plain interdependence to sustain the livelihood and economy of Nepal, and where I argued that it should be retained in some form in federal set up, he reacted: “What have Hill Hindu given to Low Land Madhesh people for the kinds (including foods) that Hill Hindu are receiving (and have received in last 250 years)? I am interested in facts, so please separate your Khas emotion before replying”.  I thanked him for the comment and replied that separating plains from hills is no answer to this. You are diverting to emotion, he wrote back. I asked him if he was based in Kathmandu. I wanted to talk to him in person. He said nothing.

In response to another piece in which I discussed how Madhesi leaders are using ‘secession threat’ as a bargaining chip to negotiate with Kathmandu, he wrote “your article is hollow”. How can you prove that “Madhes is not colonized?”

I and Ram Manohar Shah disagreed on many issues. Then, in response to “Contestations of Nepali history” (Republica, April 29, 2017), Shah asked me to read his book: The Middle Country: The Traverse of Madhesh through War, Colonization and Aid-dependent Racist State. Only then I knew he was a writer. Writing, whatever the kind and quality, requires a good deal of hard work and devotion. I appreciate him for this.

It’s difficult to comment on a book by a Madhesi writer, especially if the one commenting on it is a Pahade. You are not expected to criticize it: He does not like it because the book is written by a Madhesi intellectual and it is about Madhes, they will say if you do. These are the times not only of political decadence but also of glaring intellectual bias, where emotion rather than reason dominates political discourse, where fictions and emotions overshadow facts.

I won’t judge Shah’s book on its editorial aspects (there are many editorial errors), but his arguments promote division and do not help to heal the wounds of the past. They need to be critiqued here because they also echo the arguments of some of the Madhesi scholars and intellectuals who have been writing on Madhes. For me, Shah’s book highlights fault lines of so-called Madhes narratives.

Emotions and anger
Ram Manohar Shah starts with personal experience. While he was doing Master’s degree in Delhi University, “a hilly origin friend from Biratnagar” yelled at him by saying “Hey you, Bihari!” and he says this prompted him to explore the history of Madhes. He quotes Salik Shah’s experience of being called “Bhaiya” and “Marsiya” in Kathmandu. He includes Prashant Jha’s complaint that somebody called him “you are a Dhoti” while in Kathmandu and other accounts of how Madhesis were humiliated.

He questions foundation of Nepali state and creates a neat distinction between Madhes and Nepal, as if they are two separate states.

Shah kings annexed Madhes into Nepal, he writes.  Prithvi Narayan Shah married a princess of Makawanpur (Madhes) for “his selfish desire to get dowry”. Sugauli Treaty memorandum (dated Dec 8, 1816) had included a provision whereby the government of Nepal had to allow inhabitants of Tarai to “retire within the Company’s territories” without any “hindrance” but Nepal did not comply with this promise. People of Tarai (he says they were under British rule from November 1814 to Dec 1815) always wanted to be under protection, rule and control of British government.
He states that as per the initial treaty of December 2, 1815, lowlands between Mahakali and Mechi had to be ceded to the Company and thus whole of Tarai plains should have been submitted to colonial Britain. He says that “Anglo-Gorkha treaty” split and devastated Tarai culturally, geographically and economically. It separated blood relations, families, culture and civilizations.
He talks about how Madhesis are different from Pahades: Madhesis treat women folks with more respect than the hill folks, Pahades put women during menstruation into seclusion but Madhesis don’t, hill dwellers are lewd and allow prostitution, which is why Birgunj, Nepalgunj and Kakarbhitta are “getting infested with prostitution due to increasing hill migrants involved in prostitution”.  He says the east-west highway was “a rape on environment” and it only allowed more migration of hill folks in Tarai.

Broadly the implied message is: Sugauli Treaty should have put Tarai plains under British control, Madhes should never have been part of Nepal. Hill people are affluent oppressors and Madhesis the oppressed. There is anger, emotion and hatred against not only hill rulers but also hill folks.

Sufferings of hills
One narrative Madhesi scholars have forcefully created is that of affluent hills vs oppressed Madhes. Some make such claim blandly. Others cite wrongdoings of past rulers to substantiate it. Nowhere do they acknowledge suffering of hill folks.

Like Madhes the hills had their own sorrows, which have been documented in books and about which I have written in this space a couple of times. Agriculture was hard. One had to go to fetch fodder for cattle from the rocky hills and a number of people would die from falling off cliffs while doing so. They worked hard throughout the year but hardly got enough to eat. Until the 1990s, when road networks started reaching more parts of the hills, eating rice was a luxury for the hill folks. This was why they started to descend to the Tarai plains. They did not come down to ‘colonize’ Tarai.

If state neglect is the yardstick to measure ‘colonization,’ hills folks had also been internally colonized.

The other argument that is often used to prove ‘internal colonization’ narrative is mandatory provision of travel permit (call it passport or visa) for Madhesis to enter Kathmandu. True. A person coming to Kathmandu from Madhes needed such permit until the late 1950s. But such a permit was necessary even for those, including the hill dwellers, who left Kathmandu for the southern plains. Late Kamal Mani Dixit has mentioned this in his book Birseko Samjheko.

At the core of this restriction was a geopolitical fear. Sardar Bhim Bahadur Pande elaborates about this in Tes Bakhatko Nepal (“Nepal in Those Days”). Nepal lived under constant fear that powerful, unreliable and ambitious southern neighbor could invade Nepal; the governments of the day did not want foreigners and those coming from the south to know about internal politics; even British rulers in the south did not want any other nationality, save British, to enter Nepal, and there was fear among Kathmandu rulers that if Indians ever entered it would be difficult to send them back. And since most denizens of Tarai looked similar to Indians, explains Pande, it was hard to distinguish who is who and therefore Madhesis travelling to Kathmandu faced greater scrutiny.

Together we grow
History should be contested and critiqued. Alternative perspectives prevent history from becoming a monolith.  Deconstructive reading of Nepali history, in this sense, is good. But we cannot alter the past. There are certain things which we cannot do: wish for the country’s doom or openly invite external forces to make your country their playground.

We may keep cursing past rulers. Or indulge in endless acrimony. One says to other, your forefathers subjected our forefathers to hardship and suffering and therefore you must also suffer at the present. Or a Madhesi might say I was called ‘dhoti’ by some in Kathmandu and therefore I will also call you names. Hill rulers have hurt our ego and therefore I will fight against the whole hill community for the past mistake a few from that community made. This is a perfect recipe for communal discord. Extremists will always take this route. They have been trying this method for the last few years but it has failed; it always will.

Like it or not we are fated to live together. Which Madhesi leader, for example, will be able to say ‘I do not want votes of people of hill origin’ in this election? Or for that matter, which Pahade leader contesting election from Madhes will be able to win without the support of Madhesis?
The leaders who believe they can do so are either fools or are guided by a motive to do harm. When we need each other in crucial times, why act as if we don’t?