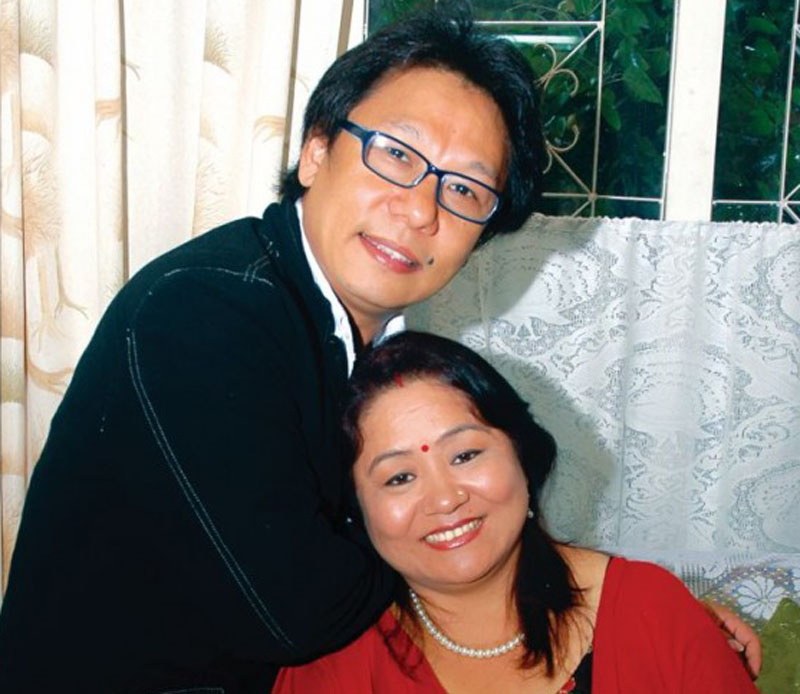 The conjugal life of popular singer duo Uday Sotang and Manila Sotang is exactly what their duet song Ekai Rathka Duee Pangra ….. (we are two wheels of a cart) means.  In this popular song, Krishna Abiral is the lyrist, Uday composer and Manila herself has given her voice into it.

When Uday becomes fire, Manila will be water and when Manila becomes fire, Uday takes up the role of water. That’s why no obstructions have come their conjugal journey which started 30 years ago.

Uday was a tenth grader at Darjeeling-based St. Roberts School when he first met Manila. Manila used to study at a school in Kalempong, then.

It was music that brought them together. St. Roberts School had produced an album in which Uday had given his voice to. Manila was a fan of his vocal. When Uday met his fan of his voice, he became her fan. Gradually he lost his heart to Manila. Uday and Manila became husband and wife one year after they met. “I met her when I was at Grade X. Marriage at Grade XI. My eldest daughter Shreya Sotang was born when we were at Grade XII,” shared Uday.

The couple, who have been spending their conjugal journey sharing, joys and sorrows, have three children, now. Their son Suyog teaches piano at British School, while youngest daughter Shristi is studying at Grade XI. Shreya is already an established singer.

Uday had to struggle hard since he got married young. However, due to the company of Manila, he found solace even in times of distress and hardship.

“We had to struggle hard since we got married young. In retrospect, I think Manila worked harder than  I did.  I was only the singer. She was bearing the responsibilities of a wife, mother, apart from being a singer,” Uday said.

On the other hand, Manila wants to give credit to Uday for becoming a singer.  “He encouraged me to become a singer,” said Manila.

There is a tacit agreement between Uday and Manila who have been managing both household chores and profession simultaneously.

“We worked for others for a long time. Now, we have started this restaurant on our own. I take the responsibility of singing in coordination with other singers while Uday looks after the management side and deals with the customers.”

It is a minor thing to have a spat between wife and husband. But Manila says there is no such significant quarrel between us.

"Uday gives more time to his friends. He does not care about his work when it comes to friends. It, at times, annoys me,” she says, adding, “Uday used to get angry with me for not practicing.  I did not obey him. Now-a-days, he does not say anything about it. Therefore, there is no quarrel between us these days.”

A smooth sea does not make skillful sailors

There is a saying ‘a smooth sea does not make skillful sailors’. This means that life would become boring, unprogressive... Read More...

KATHMANDU: “Time management is a matter of will. If you have the drive, somehow you will get it done. You... Read More...