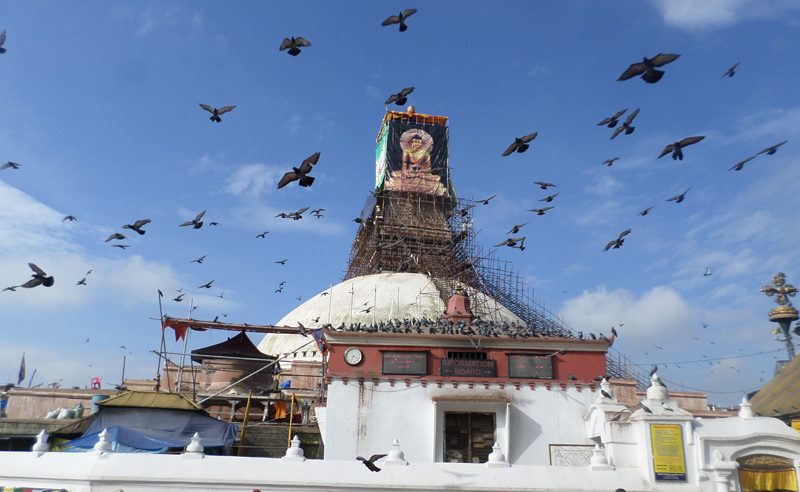 KATHMANDU, Aug 28: The reconstruction of the Boudhanath stupa which was completely damaged by the devastating earthquake on 25th of April 2015 is now in its final stage. The Boudhanath Area Development Committee (BADC) has assured that the reconstruction work will be completed by mid-November.

Currently the construction work is being carried out in the upper area of the stupa which had cracked after the earthquake. The steeple of the stupa has already been plastered. As per the plan, the work of old copper based plates which are to be replaced with gold and the piles which is the base for the umbrella crown and the wood based lotus petals is also about 90 percent complete.

The small stupas nearby the Boudhanath stupa which were also damage have already been erected. Sampurna Kumar Lama, the chairman of the BADC says, "The work has been moving forward rapidly and we are determined to complete it by mid-November."

The estimated cost for the reconstruction of the stupa is Rs 184.5 millions. The committee had collected Rs 30 million from its members and Rs 142.2 million from domestic as well as foreign donors. According to one of the committee members, "Had we waited for the government help, we couldn't have proceeded to this level in the project. We have not got any sort of help from the government."

According to the committee, around 30 kg of gold was required for the steeple. "The old gold base wasn't removed and during the reconstruction gold was coated on top of it. Still 4-5 kilograms of gold might be required," says Lama. He also disclosed to Republica that 1 kilogram of gold was collected from the locals and rest 29 kg was provided by Priest Tai Situpa Rinpoche.

The Boudhanath (36 metres tall) is said to be established in the fifth century and is also one of the tallest stupas in South Asia.

KATHMANDU, Aug 21: A man who allegedly masterminded the smuggling of 33 kilograms gold through the Tribhuvan International Airport earlier this... Read More...

RAUTAHAT, July 28: Police have arrested two people with one kilogram of gold from Bam Nahar area in the district. Read More...

KATHMANDU, Jan 6: Based on the intelligence provided by the global police, Interpol, the Central Investigation Bureau (CIB) of Nepal... Read More...

Fire breaks out in Fusre of Dharan
16 minutes ago